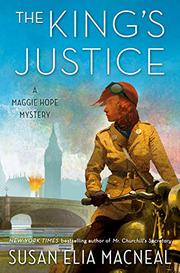 How far can a multitalented woman be pushed before she breaks?

British-born, American-raised Maggie Hope has held an amazing series of jobs since moving to war-torn London. She’s worked for Winston Churchill, traveled as a spy to Berlin and Paris, and escaped from a Scottish island where someone has been killing exiled Special Operations Executive agents (The Prisoner in the Castle, 2018, etc.). She’s also found time to help the police apprehend Nicholas Reitter, a serial killer known as the Blackout Beast, who’s been sentenced to death for his crimes. And she’s developed a relationship with divorced, job-obsessed DCI James Durgin, who’s faced with a new serial murder case when suitcases filled with bones turn up in the Thames. Fed up with the SOE and close to losing control, Maggie’s taken on a dangerous job disarming unexploded ordnance for the bomb disposal unit. She works with conscientious objectors, many of whom are Italians in Britain—"Britalians"—whose relatives were interned as enemy aliens. After refusing Durgin’s request for help in the new series of murders, she’s dragged into the case when Reitter, now in the Tower of London, claims to know who the new killer is but will only talk to Maggie, who reluctantly agrees to visit him; he says he'll give her the killer's name if the king commutes his death sentence to life imprisonment. Durgin refuses to disclose to the public that each suitcase contained a white feather, suggesting that the killer may be targeting conscientious objectors. Maggie, angered by his caution, wonders if the killer might be connected to the Italian community. She ponders whether nature or nurture creates serial killers. Could she have inherited her own killer instincts from her mother, Nazi spy Clara Hess? A bit of code-breaking and some deeper insight into Reitter break open the case but put Maggie in the killer’s crosshairs.

THE PRISONER IN THE CASTLE
by Susan Elia MacNeal
Mystery