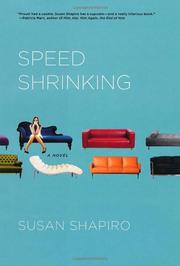 Chatterbox self-help whiz melts down when her shrink blows town.

No stranger to confessional literature, memoirist Shapiro (Only As Good As Your Word, 2007, etc.) ventures into the world of fiction with predictably ostentatious results. The author’s doppelgänger is Julia Goodman, a wealthy Manhattan quasi-celebrity married to Jake, who’s always jetting off to film TV pilots. Julia made herself famous with Up In Smoke, a tell-all about her addiction to booze and nicotine that revealed how her therapist, Dr. Michael Ness, helped her conquer her compulsions. (The book as described bears a striking resemblance to Shapiro’s own Lighting Up, 2004.) On the eve of the publication of her sequel, Food Crazy, she finds herself abandoned by the people she relies on most. Jake is off to film in Hollywood; best friend Sarah is following a new husband to Cleveland; and Dr. Ness drops the bomb that he’s moving to Arizona. “What a disaster—I’m an acclaimed self-help guru who suddenly can’t help herself,” Julia whimpers. Fretting over her abrupt loss of a counselor/father figure, she visits eight other analysts in eight days, finally settling on a cigar-smoking behavioral therapist who can’t fill his predecessor’s big shoes. For our addiction-prone heroine, nothing fills the void like cupcakes, and she packs on 35 pounds just in time to freak out over her upcoming slate of media appearances, including a shot at Oprah. Shapiro’s prose has its attractions, among them a clean, easy-to-digest style and dialogue so hurried it reads like a spiritual cousin to Aaron Sorkin’s walk-and-talks. What will spoil this light beach read for many readers is its whiny protagonist, a woman so self-centered that her biggest obstacle is getting over herself. The novel’s appeal may well be limited to those who are really into drama queens.

ONLY AS GOOD AS YOUR WORD
by Susan Shapiro
Nonfiction

LIGHTING UP
by Susan Shapiro
Nonfiction