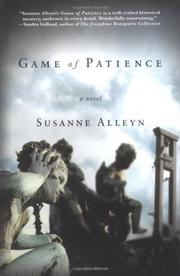 The French Revolution may have resulted in liberty for some, but Alleyn’s latest dispatch from Revolutionary France (A Far Better Rest, 2000) examines the lives of those left behind.

Police investigator Aristide Ravel brings knowledge and sympathy to the double murder of a wealthy young woman, Célie Montereau, in the apartment of a second victim, bachelor Louis Saint-Ange, who “lived on his rents”—profits from systematic extortion. Although her father, prominent Citizen Montereau, denies it, Célie appears to have been one of his victims. Aristide questions her young brother, her elderly aunt, who refuses to call anyone “Citizen,” and an unlikely friend of hers, Citizeness Rosalie Clément, a genteel and impoverished woman acquainted with disappointments far beyond naïve young Célie’s experience. Finding himself drawn to the candid and bitter Rosalie, Aristide discovers against his will that there’s more to her life than her quiet misery at a down-at-heels boarding house. The double murder he’s investigating, an apparently unrelated series of murders of fashionable men, and several unhappy love affairs, all end by coming together on the guillotine’s scaffold.

Alleyn simultaneously considers the destruction caused by the Revolution as well as the smaller domestic mysteries of love lost and betrayed. The result can be compelling if sometimes over-ambitious and pretentious.

THE CAVALIER OF THE APOCALYPSE
by Susanne Alleyn
Fiction

A TREASURY OF REGRET
by Susanne Alleyn
Fiction