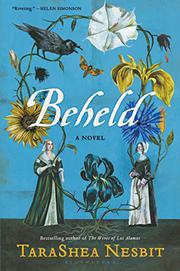 Ten years after founding the first Pilgrim settlement, the colonists are forced to address the strife that roils beneath their utopian dreams.

It’s an August morning in the Plymouth colony, the year 1630. It’s been 10 years since a group arrived on the Mayflower to start life afresh, and today is a day of great anticipation: A fresh wave of people is expected to arrive. Alice Bradford, wife of the colony’s governor, William, is especially anxious. On this new ship will be her stepson, the child left behind by William and his first wife, Dorothy, when they undertook the perilous Mayflower journey. Alice remains haunted by Dorothy’s death, which occurred under mysterious circumstances, and feels guilt for having usurped her childhood companion for the powerful role of William Bradford’s wife. But the day is full of anticipation in other ways, too. Nesbit (The Wives of Los Alamos, 2014) uses alternating narrators, chiefly Alice Bradford and Eleanor Billington, the wife of a disgruntled, disillusioned colonist, to show the tension and unrest building among those in charge of the fledgling settlement and those who are chafing against the powerful. A murder will be committed by the time this August day has come to a close, and by the time it does, the settlers will question whether or not they are truly “fashioned in God’s favor,” as they once believed. Although the pacing here can be off-putting (the buildup to the promised disaster is long; the climax, too short) and the sensitively rendered but still peripheral role that the Wampanoag Tribe plays could have used more development, Nesbit’s novel has all the juicy sex, lies, and violence of a prestige Netflix drama and shines surprising light on the earliest years of America, massive warts and all.

A dramatic look at the Pilgrims as seen through women’s eyes.