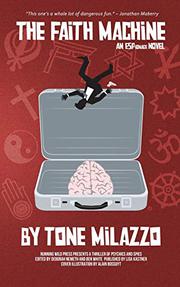 In this engrossing spy thriller, Milazzo (Picking Up the Ghost, 2011) asks: What happens when a unit of psychic misfits is asked to save the world?

Dr. Ken Park, a Korean American psychologist and spy, leads Project Dead Blind, a group of damaged psychics who undertake black-ops missions. Their current assignment requires the psychics to recover a Faith Machine, a Soviet-era “psychotronic super-weapon” located in Liberia. They fail spectacularly, as the machine belonging to a former warlord—now known as John the Baptist—is torched, and John, in turn, slaughters dozens of his religious followers. The Dead Blind squad leaves Africa battered and disgraced, returning to civilian life. But they’re hardly out of danger—its agents are stalked by Chinese military intelligence and by the Casemen, a handful of superpowered psychics. While escaping to their West Coast safe house, two of the fugitives even manage to destroy another Faith Machine, this one possessed by a religious zealot–turned-politician. Once the team reaches the safe house, they are sent on another mission to retrieve the final Faith Machine, located in North Korea. All but Park get captured as they near their destination, and they meet the supernatural being behind the Faith Machine, whom they must somehow defeat. Author Milazzo has written this wicked novel with his tongue firmly in cheek, lampooning both the spy and superhero genres. Unfortunate leader Park finds himself wrangling cats, attempting to ride herd over a sextet of operatives who just don’t get along. They also prove to be amateurs who are in over their heads. In order to save the planet from destruction, the agents must learn to combine their abilities—and the world will need a lot of luck to survive. As the plot unfolds, Milazzo does an admirable job of creating characters who, if not embraceable, are definitely realistic. Project Dead Blind unites messy people who are still willing to contribute to the greater good. Readers will root for them to win, largely because their opponents are so despicable.

A captivating adventure jammed with characters who, though troubled, try to do the right thing.