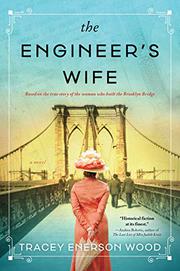 When the chief engineer falls ill, his wife steps up to direct the construction of the Brooklyn Bridge.

Wood’s debut novel fictionalizes the story of Emily and Washington Roebling, the real couple who took on the immense Brooklyn Bridge construction project. Emily’s involvement was not intentional. For a respectable lady in 1870, it was frowned upon to leave the house without a chaperone, much less manage an all-male crew of foulmouthed laborers. However, Emily is determined to resist domestic constraints, especially since, due to complications attending the birth of son Johnny, the Roebling family will remain small. She intends to join the suffragist movement, but a series of tragedies besetting the bridge project interferes. Her father-in-law dies of tetanus following a work-site crash, necessitating that Wash take over as chief engineer. One of the main virtues here is Wood’s grasp of the logistics of construction without today’s heavy equipment. Underwater caissons had to be seated on the bedrock at both ends of the bridge to anchor the towers. The caisson-sinking process, involving significant pressure issues and the need to provide oxygen to men working underwater, causes many cases of “caisson disease,” i.e., the bends. Wash himself is afflicted, and during his extended recovery, Emily must act as his intermediary with a fractious group of workers, investors, and corrupt politicians. Her most trusted ally, showman P.T. Barnum, helps her develop confidence and public speaking skills but also seems intent on drawing her into a dangerous flirtation. Clad in a bloomer work costume designed and executed by Wash, whose sewing prowess far exceeds her own, Emily gradually overcomes gender prejudice and wins over her bitterest opponents, although her people-pleasing is itself gender-stereotypical. The writing meticulously evokes the sights, sounds, and smells of 1870s New York—if, at times, Wood seems to embrace the Barbara Taylor Bradford school of décor-forward description. Dialogue is inconsistent, ranging from glib to stilted.

Wood spares no detail in showing us what led up to that first stroll across the great bridge—by a woman.