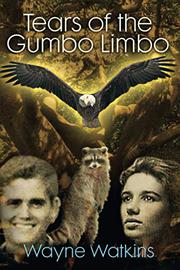 TEARS OF THE GUMBO LIMBO

In this debut novel’s two parallel tales about a Florida tribe, a young man struggles to overcome grave danger to be with the woman he loves.

In 1513, Willow is 20 years old and a member of the Calusa Tribe that has occupied Florida for millennia. While out fishing, he catches a massive snook—the biggest one ever snared in Calusa history, a distinction that makes him widely known and admired. As a result, the king grants Willow a wish, and he chooses to take a series of tests to join the Wiseman Council, the “most revered club in the nation.” While Willow passes the prohibitively difficult exams, securing an important role in tribal political life, he’s much more excited about pursuing a relationship with Cylee, the “most beautiful woman in the Calusa nation.” But the Spanish are preparing to invade, and Willow’s duty is to risk his life to join the fight against their advances. Watkins artfully places this story alongside another strikingly similar one set two centuries later, in 1710. Again the protagonist is named Willow, and he’s elevated to the status of a “national hero” when he bravely defeats a company of Spanish soldiers with the assistance of his friend Bonee. This Willow is also elevated to the Wiseman Council and is revered by many as a “god in disguise.” He falls in love with a princess, Leah, and is made a prince himself, a conversion that allows him to marry the girl for whom he’s pined for years. But in this second plot, the danger to this union isn’t war but the spread of a disease carried by the Spanish that proves deadly to the Calusa, a terrible turn of events affectingly described by the author. Watkins vividly brings to life the intriguing culture of the Calusa and manages to fit two moving tales of love into one brief novel. His prose is plain and sparing but precise and powerful, though the dialogue, especially in the second narrative, can be earnestly wooden. The author provocatively raises questions about the inescapability of destiny but wisely withholds any facile answers, permitting readers the liberty to ponder them on their own.

A beautiful pair of love stories and a thrilling peek into a lost world.