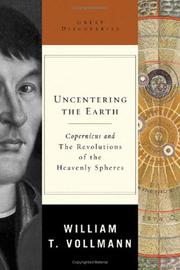 Copernicus and the Revolutions of the Heavenly Spheres
by William T. Vollmann
BUY NOW FROM
AMAZON
BARNES & NOBLE
GET WEEKLY BOOK RECOMMENDATIONS:

Times may be tough for evolutionists, but consider: As recently as 400 years ago, folks were being burned at the stake for thinking that Earth revolved around Sol, and not the other way around.

Indeed, remarks the hyper-prolific Vollmann, author of Europe Central, winner of the 2005 National Book Award for Nonfiction, “Copernicus . . . was not only lucky, but canny to have died when he published.” The publication in question, The Revolutions of the Heavenly Spheres, looks antique to us now. But, Vollmann argues, following other historians of science, Nicholas Copernicus’ treatise—which he rightly reckoned would scandalize the godly—was and remains remarkable on a number of fronts. Most important, by positing and then proving that the solar system is heliotropic, Copernicus removed humankind from the center of the universe at a time, Jacques Barzun notes, “when men thought of themselves as miserable sinners fearful of an angry God.” Revolutions, writes Vollmann, is neither empirical nor, strictly speaking, rational. It is based, he adds, on “what we would now consider a faulty premise.” Yet it is remarkably coherent, and even if it took two more centuries to prove him experimentally, Copernicus turned out to be right on many points. Copernicus did die soon after publishing his book, condemned by Protestant and Catholic clergy alike; infamously, his follower, Giordano Bruno, was burned to death for his heterodoxical views, taking the place of his comparatively lucky master. Though peppered with intrigue and conflict and even a little human interest, Vollmann’s close reading of Revolutions is not for the scientifically fainthearted, full of head-spinning sentences on the order of, “[I]t is more than remarkable that the deferent radii which Copernicus calculated for the planets, which translate into the mean radii of their actual elliptical orbits, will be fairly accurate for Mercury and Saturn . . .”

Stick with it, though, and there’s much to learn about a book little studied today—but one that inarguably changed the world.

LAST STORIES AND OTHER STORIES
by William T. Vollmann
Nonfiction