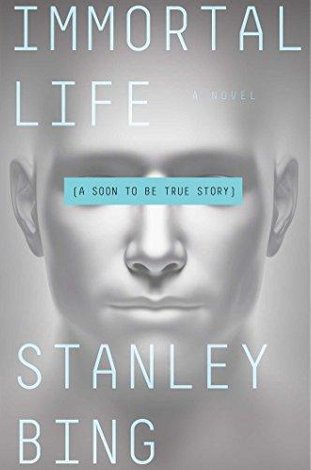 I'm always on the lookout for good books to read. I found eighteen of them coming out in December, which include stories about a megalomaniacal search for immortality, spinoff tales based on Alice in Wonderland, a Battle Royale to the death between coworkers, and the rise of magic on the dead bones of science.

Unless you live under a rock that doesn't get Internet and cable, you know that the release of the next Star Wars blockbuster film, The Last Jedi, is just a couple of short weeks away. That's plenty of time to dive into this interconnected set of prequel stories set in one of the film's far, far away locations: the casino city of Canto Bight. In the film, this is where Finn (played by John Boyega) and Rose Tico (played by Kelly Marie Tran) meet up with Benicio Del Toro's DJ the galactic hacker. (Yes, I'm a Star Wars nerd.) In Canto Bright, even the most innocent of people can get into all sorts of trouble…and they often do.

Let's face it: getting older sucks. The human body eventually starts to wear out, just when we've amassed enough experience to know how to live life to the fullest. Arthur Vogel, the ridiculously rich mogul of Bing's new thriller, has a solution for that: life extension tech. He's already 127 years old, but he wants more. So, like any megalomaniac, he comes up with an ends-justifies-the-means solution. Create a new, younger human being specifically for housing his mind. Here's the thing: Gene (the human vessel in question) is an autonomous person with his own desire for survival. Immortal Life depicts the battle of two people over one body.

In the latest installment of the hugely popular Expanse series by James S. A. Corey (the nom de plume of writers Daniel Abraham and Ty Franck), an old enemy returns. Recall that, at the start of the series, humanity had colonized the Solar System but rising tensions developed between the inner planets (Earth and Mars) and the outer planets. Then, an alien artifact is found that allows for interstellar travel, thus opening up the planets in other galaxies to be used as human space colonies. Persepolis Rising, shows that life on the faraway colony worlds is tough going, especially for the crew of the aging gunship Rocinante, who have their hands full trying to maintain the peace. Meanwhile, on the colony world of Laconia, a hidden enemy has its own ideas for the future of humanity.

Fans of Lewis Carroll's Alice in Wonderland will treasure this anthology of all-new stories set in the same strange and weird-but-wonderful magical world. Each of the eighteen short fiction stories included here is based on some event or character from Alice's Adventures in Wonderland and Through the Looking-Glass and What Alice Found There, and told in a way that complements the original while offering its own self-contained bundle of entertainment. Contributing authors to this appetizing anthology include Jeffrey Ford, Seanan McGuire, Delia Sherman, Catherynne M. Valente, Kaaron Warren, Jane Yolen and more.

The Forever Ship by Francesca Haig

This is the final book in Haig's post-apocalyptic trilogy, where nuclear war caused all humans to be born in pairs: the deformed Omegas, who are exploited and oppressed, and their Alpha twins, who have become the de facto ruling class. The Alphas would love nothing more than to get rid of the Omegas entirely, but they are inextricably linked; when one dies, so does the other. Cass is a unique and rare Omega whose possesses the power of psychic foresight and her twin brother, Zach, is a leader of the Alphas. In The Forever Ship, a new thrust of the Omega rebellion promises to topple the Alphas and drives Zach to seek refuge with Cass, but Cass is already dealing with another problem: a traitor in their midst.

One of Us Will Be Dead by Morning by David Moody

I enjoyed the heck out of Moody's outstanding Hater trilogy, a paranoia-infused apocalyptic thriller in which some people are overcome by uncontrollable fits of violence against people who are unaffected. It sets up a tense, realistic dichotomy in the human race that was downright chilling. Moody's new book, One of Us Will Be Dead by Morning, is set in the same hopeless world, telling a parallel story of the outbreak that causes the divide. It's set on a barren island where fourteen people are taking part in a corporate team building event run by an "extreme sports company". When the outbreak hits, the word "extreme" gets redefined in a bloody and gruesome way.

Year One by Nora Roberts

Year One posits a different kind of apocalypse. Not only is there a plague which wipes out eighty percent of the population, but in its wake science and technology are replaced by magic. And not just the good kind; magic comes in both light and dark varieties. Not everyone has magical abilities, but two of them who do are Lana and Max. As they make their way out of New York City to find sanctuary, they band together with other survivors, none of whom know the world-changing purpose that awaits them.

In this long-awaited final volume of the 5-part Psalms of Isaak series, set far into Earth's future where magic is commonplace, the battle for control of The Named Lands between the Andro-Francine Order and the Y'Zirite Empire has reached a turning point. Rudolfo, believing that his son is dead, has infiltrated the ranks of Y'zirite forces, pretending to be one of them. His plan is to destroy them all from within using a poison that targets only them. Meanwhile, Rudolfo's wife Jin Li Tam may bring that Empire to ruin when she goes up against her own father.

Fancy a little Japanese horror? S is the fifth novel from Suzuki's Ring series, the first novel of which inspired the cult horror film hit about a curse perpetuated and spread by watching a videotape. (Cue creepy girl climbing out of the television set.) In S, an image processing specialist named Takanori Ando comes across authentic video of a man committing suicide. Then he notices that every time he plays the video, it's subtly different than before. Author Suzuki reinvents his interesting premise in a way that both satisfies existing fans and invites brand new readers to revel in its creepiness.

Do you read short fiction? If you do, then you'll know about the short, sharp shock that it can deliver. In addition to Mad Hatters and March Hares listed above, check out December's other best picks for short fiction stories