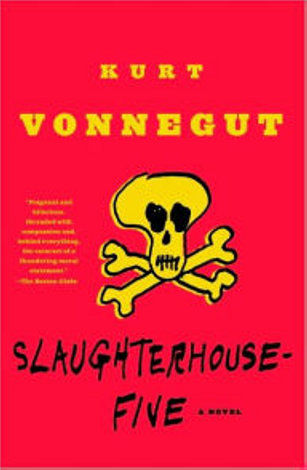 Kurt Vonnegut Jr. was born on November 11th, 1922 in Indianapolis, Indiana. His family had immigrated to the United States from Germany. His mother was the heiress to a major brewery, Lieber Lager Beer, which had earned her family a considerable fortune in the early 20th Century, while his father was a notable architect.The family was hit hard by the Great Depression, losing almost everything. His mother attempted to become a writer, and Vonnegut noted that his house was crammed full of books.

He began writing regularly during high school, when he contributed to his high school’s newspaper, and continued to do so at Cornell University, where he wrote humor and editorial columns. His time at the university lasted until his Junior year; when faced with the prospect of being drafted, he joined the Army and was sent to the Carnegie Institute of Technology. After his training, he was assigned to the Army’s 106th Infantry Division.

Vonnegut was deployed to Europe, where he participated in the Battle of the Bulge as a scout. As the German military overtook their position, he and the other six members of his scout unit were trapped and out of food and were soon captured. From there, they were sent to the German city of Dresden.

Dresden was the “first fancy city I’d ever seen,” Vonnegut later noted in an interview [The Last Interview]. “A city full of statues and zoos, like Paris. We were living in a slaughterhouse, in a nice new cement-block hog barn. They put bunks and straw mattresses in a barn, and we went to work every morning as contract labor in a malt-syrup factory.” He was in the city on February 13th, 1945, when air raid sirens went off and he and his fellow Prisoners of War were sent down into a meat locker. “When we came up the city was gone.”

Allied bombers had utterly destroyed the city. After surfacing, he was put to work digging bodies out of the rubble in a sort of “terribly elaborate Easter egg hunt.”

Vonnegut returned to college after the war, attending the University of Chicago, where he studied anthropology. He never completed his degree, and picked up a job

with General Electric in Schenectady, New York in their public relations department. (He later noted that following the publication of Cat’s Cradle in 1972, the University of Chicago noted that it fit the requirements for a dissertation, and awarded him his degree.)

Vonnegut’s life to this point was essentially a referendum on some of the greater implications of technology’s impact on society. His experiences during the Second World War are closely tied with the use of highly industrialized warfare, from the operations of units in the field to the wide scale bombing of Dresden. Additionally, according to H. Bruce Franklin writing in Science Fiction Authors, Vonnegut’s time at GE further reinforced some assumptions: “Here he was exposed to the gadgets-for-profit mentality of the organization man and the implications of technology in the service of monopoly capitalism. His suspicions about the ability to control technology were reinforced.”

It was at this time that he had begun writing, publishing stories in Collier’s, Saturday Evening Post, Esquire, and even some science fiction magazines such as Galaxy Science Fiction. He also set to work on his first novel, Player Piano, a dystopia where machinery takes care of humanity in the far future. Vonnegut left GE to write full time and published the novel in 1950. He noted that he was heavily inspired by the works of Aldous Huxley’s Brave New World. In his entry in the Cultural History of Literature series, Roger Luckhurst noted that “Vonnegut’s [Player Piano] is an attack on technocracy and the cult of the engineer as fundamentally anti-human, with the principal action situated in an automated factory on the site of Edison’s first workshop.” The book was a whole-hearted rejection of the style of fiction that had become so popular under the reins of John W. Campbell Jr.’s Astounding Science Fiction and copycat publications.

As Vonnegut was entering the writing world, the science fiction genre was undergoing its own transformations. The transformative ‘Golden Age of science fiction’ wave that modernized the genre had largely subsided, and new science fiction magazines such as H.L. Gold’s Galaxy brought in a new cohort of literary, thoughtful authors to the table, including Vonnegut. Mike Ashley, writing in his history Transformations: The Story of the Science Fiction Magazines from 1950-1970 noted that genre publications “could continue to cater for all tastes so the fiction they published could be as complex or as simple as they wished. It leaned that the sf magazines continued to lead the direction of the field, but in seeking to broaden their markets and break into the slicks, the writers became more creative, inventive, polished and sophisticated.”

Vonnegut certainly falls into this category—throughout the time he published short fiction, he largely avoided being labeled as a ‘science fiction writer,’ the result of which meant that he could publish in some of the more widely read publications in the United States. “The sf fraternity did not readily accept him because Vonnegut seemed to be dismissive of science fiction,” Ashley noted, “while the literary establishment could not accept him because his books were published as straight science fiction.”

Vonnegut’s next novel, Sirens of Titan (1959), has often been described as his most science fictional novel. In it, a wealthy American is teleported across the solar system in a series of hapless adventures, and largely deals with the nature of free will. Like his other novels, the story is deeply satirical, with the revelation that most of humanity’s major moments are the side affect of an alien civilization attempting to transport a spare part to one of their space ships. Charles L. Elkins notes in his review in Survey of Science Fiction Literature that “[Vonnegut’s] use of irony helps the reader tolerate the painful apprehension of an absurd universe.” Vonnegut earned a Hugo nomination for Best Novel for the story.

Over the next couple of years, Vonnegut published several additional famous novels and collections: Canary in a Cat House (1961), Mother Night (1961), Cat’s Cradle (1963), God Bless You, Mr. Rosewater (1965), and Welcome to the Monkey House (1968). With each release, his literary stature and fame grew, and he has since become regarded as one of the best known novelists in the country.

It was in 1972 that he published his most famous novel, Slaughterhouse-Five. The novel was closely tied to Vonnegut’s own past: a soldier named Billy Pilgrim survived the bombing of Dresden and becomes ‘unstuck in time’. The novel was a powerful work of anti-war fiction at a time when anti-war sentiments were at their highest. The Vietnam War was becoming increasingly unpopular as it dragged on, while Vonnegut was troubled by the lack of knowledge or even concern about what he had witnessed after his capture. “I had to say something about it,” he noted in an interview with Robert K. Musil for The Nation in 1980. “And it took me a long time and it was painful. The most difficult things that I had forgotten about it.”

Vonnegut’s apprehensions towards the technological promises of science fiction are deeply rooted in what he experienced during his life. “But for me,” he told Musil, “it was terrible, having believed so much in technology and having drawn so many pictures of dream automobiles and dream airplanes and dream human dwellings, to see the actual use of this technology in destroying a city and killing 135,000 people and then to see the even more sophisticated technology in the use of nuclear weapons on Japan. I was sickened by this use of the technology that I had such great hopes for.”

Katherine M. Morsberger noted in her review for Survey of Science Fiction Literature that in the book, “Vonnegut creases cosmic and early comic chaos, luring the reader in to the awesome emptiness of space, peopled with the bizarre creatures ‘science fiction had led him to expect’ there, to demonstrate that there is no comfortable escape - whether in the past, present, or future - from reality, and that only from a point of vision completely outside Earth can man attempt to live with or account for such horrors as the Dresden fire-bombing.”

It’s clear that Vonnegut’s experiences in the Second World War had a profound affect on his life and career - notable works notwithstanding. Throughout his career as an author, he worked to capture the absurdity and hypocrisy of warfare, frequently attending protests and rallies over the course of the remainder of his life.

Where some of the genre’s staunch conservatives fell back on their trust of technology to better the lives of humanity (such as Arthur C. Clarke, Isaac Asimov, or Robert Heinlein - all veterans of the Second World War), Vonnegut experienced, firsthand, the outcome of such technological innovation when it came to wholesale destruction. His drive to remember and to make sense of the violence he witnessed resulted in a career that pushed against genres and outright rejected conventional science fiction in ways that broadened and enhanced the larger ongoing conversation that was science fiction.

Speaking with The Paris Review in 1977, Vonnegut reflected on events in Dresden which had the greatest impact in his life, revealing the absurd nature of his world: “The raid didn’t shorten the war by half a second, didn’t weaken a German defense or attack anywhere, didn’t free a single person from a death camp. Only one person benefitted - not two or five or ten, just one.” That single person was himself, for his novel Slaughterhouse-Five, who “got three dollars for each person killed. Imagine that.”