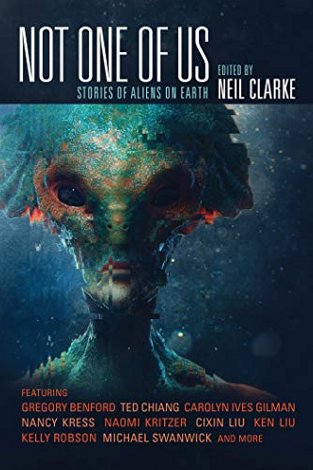 I run across lots of short fiction, whether it's free online fiction or included in multi-author anthologies, single-author collections, or individually published novellas. I love the short fiction form, not only because I can easily squeeze in more stories, but because of the economics of short fiction storytelling. There's no padding here, just pure story.

Here's a roundup of my recent adventures in short fiction reading…

One of the reasons I like reading short fiction is that the variety of stories never cease to surprise me. That's especially evident when I bring my own preconceived ideas about what a particular story will offer. Take, for example, the themed anthology Not One of Us: Stories of Aliens on Earth edited by Neil Clarke, proprietor of Clarkesworld Magazine, one of the best websites to read free science fiction, fantasy, & horror. As the book's title suggests, it's a collection of stories about aliens on Earth. A reasonable expectation would be that these stories are about aliens landing on earth and all the "end of the world" alien invasion tropes that go along with that. That notion is completely blown out of the water with the opening story, "Touring with the Alien" by Carolyn Ives Gilman. This quiet, contemplative story takes place about 6 months after aliens have landed across North America in giant, impenetrable bubble-like spaceships. With no other world-shattering events occurring, life on Earth has begun trending towards some return to normal. That's when we meet Avery, a driver for the Specialty Shipping Company who does "the jobs no reputable company would handle." Their latest job involves, in fact, one of the aliens, who wishes to tour the country. Avery's assignment is to take the alien and one alien-assigned human on that road trip. What follows is a journey that's as much about Avery as it is about the secretive alien, who we only get to hear about at first through its human translator. While we do eventually find out some interesting details about the alien (and even more interesting: the relationship with its translator), Avery's history becomes more and more significant to the emotional connection readers will ultimately feel with the story.

Another story from Not One of Us that veers from expectations is "Laws of Survival" by Nancy Kress. As the author disclosed on SF Signal some years ago, the seed for this idea is not asking what we would do if aliens arrived on Earth, but instead asking what would the aliens want from us? To explore this idea, the author set her story in a post-apocalyptic landscape, some years after an undefined war that left people scrounging for food. It's also some years after aliens have landed on Earth and erected impenetrable domes where they have sat inert ever since. Shortly after the protagonist, Jill, finds a dog near one of the domes, she sees the long-dormant dome open a small window. A robot emerges and takes Jill and her newfound puppy inside where Jill is forced to play the role of dog trainer for some unforeseen purpose. The aliens, it seems, have a greater interest in dogs than in humans. The story takes on a new level of meaning when Jill's secret—one she's kept repressed to help her survive on the outside—is revealed. It's an effective story not only for its content, but also for the author's straightforward writing style.

Next, I picked up the never-ending treasure that is Worlds Seen in Passing: Ten Years of Tor.com Short Fiction, a hefty anthology edited by Irene Gallo from Tor.com—also a great venue for awesome free SF/F/H fiction. In the wonderfully scathing "La Beauté Sans Vertu" (French for "Beauty Without Virtue"), Genevieve Valentine takes a swipe at the current trends in the fashion industry. It takes place in the near future where models achieve the perfect figure by literally replacing their arms with those of young girls. (No older than 14 is best!) The scene is a fashion show by House of Centifolia, one of the world's top fashion houses. The model protagonist is Maria, the star model set to showcase the ultimate design by the head of the House, Rhea. There's not much dialogue here; mostly just rapid-fire, third-person descriptions that simultaneously (and expertly) read like well-crafted world building and drive-by social commentary about the overrated value we give to beauty.

On a previous adventure in short fiction, I read the first two (of four) installments of the Murderbot Diaries by Martha Wells (All Systems Red and Artificial Condition). This time around, I read the final two installments, Rogue Protocol and Exit Strategy. For the uninitiated, Murderbot is the self-appointed name of the mechanical/human construct that serves as the first-person narrator for these exciting, fast-paced stories. It's actually a Security Unit (or SecUnit) designed and programmed to protect humans in dangerous situations. This particular SecUnit, though, has hacked its own governor module, making it an autonomous being that does not have to listen to humans. This is bad news for SecUnit in that if the authorities of GrayCris, the company that created it, ever found out, it would be destroyed. Nevertheless, SecUnit aims to find out about the origins of its possible murderous past and the suspicious goings-on at GrayCris itself.

In Rogue Protocol, SecUnit has a lead on some of GrayCris Corporation's shady dealings. There's an abandoned terraforming station that SecUnit suspects as being a cover for illegal mining operations. SecUnit stows away aboard a vessel sent to investigate. Once at the facility, SecUnit begins its investigation which includes disclosing its presence to the team's less-sophisticated robot named Miki. Miki is described as being a "pet robot" to the team and especially to Don Abene, the team lead. SecUnit's presence is not hidden for long once a danger presents itself and SecUnit comes to the rescue. It does so mostly because of its inherent programming to protect stupid humans—most humans are stupid in SecUnit's eyes, a reflection of its social awkwardness—but also the ineptitude of the team's human security consultants. It's here that SecUnit's calculations kick into overdrive, attempting to maintain its cover story and the fact that it is an autonomous bot. For the reader that means a quickly moving story with SecUnit trying to rescue humans from the various dangers of the facility. Readers of the previous stories should take note: this one packs a bit of an emotional punch by story's end.

In the final Murderbot story, Exit Strategy, SecUnit's story comes full circle in that it is reunited with the first human who ever showed it a modicum of respect. Or, at least it wants to be; said human (Dr. Mensah) has been kidnapped by GrayCris, the evil corporation that caused all of this trouble for SecUnit and its crewmates across these adventures. The kidnapping is an attempt to prevent GrayCris Corporation's evil deeds from being discovered, but SecUnit is having none of that. With a determination not seen by most human characters in novels, it sets out to rescue its friend. Dr. Mensah's designation of "friend" is not one that SecUnit is comfortable with; it still maintains a safe social distance from humans, a behavior that has been significantly relaxed across the arc of the four novellas. Indeed, it is SecUnit's transformation across the series that keeps it fresh, even if much of day-to-day actions it performs (monitoring the area through drones; hacking into local computer systems, etc.) is the same. One thing that is new: a lengthy rescue sequence near the end of the story that epitomizes the essence of the series. That is, there is lots of detailed action sequences and chances for the reader to root for the hero. By the closing paragraph, readers are left with a suitable sense of closure, but also the promise of more adventures to come.

Another excellent story from Tor.com is The Test by Sylvain Neuvel. This novella takes place in a near-future Britain where Idir, an immigrant from Iran, is taking a citizenship test. Idir is nervous, but has the support of his wife and children. Successfully passing the test of twenty-five questions will mean citizenship for all of them. While taking the test, an unexpected event occurs that puts the lives of people in his hands. It's hard to say more without spoilers, but much like Neuvel's Themis File novels, the story gives readers more than relentlessly paced straightforward plot. It also gives readers seemingly simple but morally complicated issues to weigh over. Score another one for social science fiction. And score another win for readers who are looking for a remarkably tense, page-turning read.