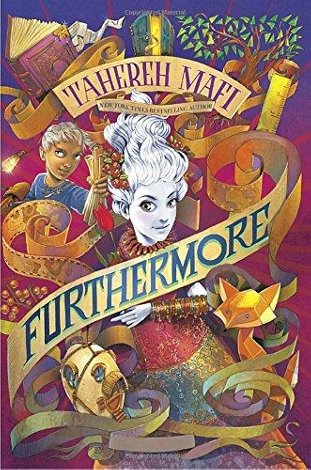 She tore off running.
Out the door and down the path and through the meadow and into the field, past the pond and across the bridge and over the hill and up and up and up the tallest tree in all of Ferenwood. There she sat, heart bumping into bone, and decided she would not leave this tree until she died.
Or until she got bored.
Whichever came first.
—Furthermore, by Tahereh Mafi

“Heart bumping into bone.” I love that.

It’s been three years since eleven-year-old Alice Alexis Queensmeadow’s father disappeared. A few days before the Surrender—a coming-of-age ceremony in which Ferenwood twelve-year-olds exhibit their magical powers and are given a task to complete—Alice is approached by Oliver Newbanks, an old classmate of hers. Oliver claims to not only know where her father is, and offers to help Alice rescue him—if she helps him with his as-yet-uncompleted Surrender task.

Alice not only refuses, but quite rightfully calls him out:

"You are a rotten person,” she said. “That you would dangle my father in front of me as though he were a bit of candy. It’s not enough for you to simply bring him back to his family with no expectation of anything in return—”

“We have no deal, Oliver.” She cut him off. “If you have even half a heart, you may tell me where my father is. Otherwise, I have a life to attend to.”

I’ve seen this trope used in a multitude of stories, but this is the first time I’ve seen a protagonist not only turn down the bait, but ALSO tell the blackmailer off. So refreshing! A few days later, though—after Alice’s disastrous performance at her own Surrender ceremony—she reconsiders, teams up with Oliver, and the two of them head off to the dangerous and fantastical land of Furthermore to find her father.

Furthermore has understandably been compared to Alice’s Adventures in Wonderland again and again—and there are far more similarities than the heroine’s name. Like Wonderland, Furthermore is a topsy-turvy world of absurdity, nonsense, and wordplay, but also a world of strict rules; a dangerous world in which the rules change without warning, and ALWAYS in Furthermore’s favor; a world that holds its visitors to said rules, but cheats unrepentantly and often. All of which reflect the experience of childhood, when the rules of the adult world so often appear to be—and let’s be honest, oftentimes they are—hypocritical and inconsistent and illogical and incomprehensible and flat-out unfair.

There are moments that parallel the original Alice—like Alice and Oliver’s soaking-wet arrival in Furthermore—as well as more direct callbacks, like when Alice admits that she is getting “...curiouser and curiouser about this boy with the mouth of a liar and hair the color of silver herring.” But it’s not a direct re-write, and readers are bound to find parallels to lots of other stories. I saw The Phantom Tollbooth in Furthermore’s bureaucracy:

“Yes. They don’t like to waste time here. For years Furthermore let visitors take as much time as they wanted, but so much of it was spent on thinking and wondering and deciding that it’s now very strictly regulated.” And then, seeing the look on Alice’s face, he added, “Studies have shown that thinking and wondering lead to thoughtful decision-making. It’s an epidemic.”

I saw A Wrinkle in Time in Alice’s quest to find her father; in her outsider status and her moments of pure love and pure anger; in her horrifying experience as a three-dimensional being in a two-dimensional world; in the description of her father’s prison. I saw Time Bandits in the portals that opened far, far, far from the ground, and I saw Anne Shirley and Gilbert Blythe in the arc of Alice and Oliver’s friendship. But there’s even more here that makes Furthermore an original—including a thread about feeling like a sidekick in what you thought was your own adventure, and another one about what a magic-based economy would mean in terms of power dynamics, equality, and even the possibility of successful adventuring.

Although the narrator makes reference to knowing both Alice and Oliver personally, we never learn their identity. The adult perspective gives the whole story an Old Fashioned feel; the voice is informal and chatty, given to asides and forewarnings and second-guesses, and will work wonderfully as a voiceover in a movie:

He spent the next ten minutes giving a speech about the great day that is the day of their Surrender, and I can’t be bothered to remember it all (it went on for nine minutes too long, if you ask me), but suffice it to say that it was a heart-warming speech that excited the crowd and sent jitters up Alice’s skirts; and anyway, I hope you don’t mind but I’d like to skip ahead to the part where things actually happen.

Speaking of pacing! The adventure doesn’t really begin until about page 100—a full quarter of the way through the book—which might be too much for some readers. Those who stick with it, though, will enjoy LOTS of action in the rest of the book, along with lovely, lively prose, and a story about family and friendship, about feeling—and looking—different from the people around you, about grief and blame, about regret, honesty, and forgiveness.