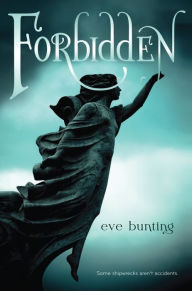 I’ve been fascinated by wreckers—people who light false beacons on the coast in order to lure ships into rocky areas, then loot the vessel as it sinks—for as long as I can remember. I’d always chalked that interest up to Susan Cooper’s Greenwitch, but now, after a bit of Googling around, I’m wondering if I’m misremembering that, and if Young Leila discovered wreckers in some other book? It wasn’t in Iain Lawrence’s The Wreckers, which I read far later, and it wasn’t in Enid Blyton’s Famous Five Go Down to Sea, because Enid Blyton is Not My Jam.

But I digress. And as my digression began before I even started to write about the book I’m here to talk about…well, that doesn’t bode all that well for the book, does it?

It’s not that Eve Bunting’s Forbidden is particularly problematic in any way, it’s just…thin. A lot of atmosphere, and not much else.

It’s about recently orphaned 16-year-old Josie Ferguson, who leaves her comfortable house in Edinburgh to live with her aunt and uncle until she is of age to inherit her parents’ estate. On the way to her new home at Brindle Point, villagers jeer at her coach, demanding to know why she’s there, ordering her to turn around and go away. Which is not the nicest sort of welcome.

Her coachman even tries to talk her out of staying, and when she stands firm, he offers up his own address as a safe haven if she changes her mind. When she finally meets her new guardians, she starts to think that maybe the coachman knew more than he was saying…and that maybe she should have taken him up on his offer.

So, spoiler: Forbidden is about wreckers. But it’s not a bad sort of spoiler, because although the actual reveal comes quite late, knowing what’s actually going on will heighten the tension for most readers. In addition to the wrecking storyline—which is great fun if you’re able to skate past the less-believable aspects—Bunting goes full-gothic, with mixed results:

So, Forbidden did not provide a particularly fantastic reading experience. But all is not lost! It DID inspire me to finally—FINALLY—pick up Daphne du Maurier’s Jamaica Inn. I’m only a chapter into it, but it made me laugh when I realized that it starts in exactly the same way—with a young woman who has just been orphaned on her way to live with her aunt and uncle in an out-of-the-way locale….