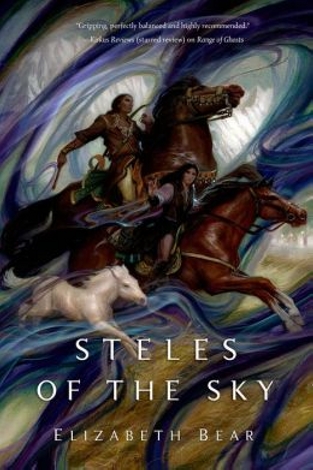 There's no shortage of great speculative-fiction reading, as evidenced by this roundup of the best bets for entertaining, thought-provoking and wholly enjoyable reads made up of news book hitting the bookshelves this month.

WHAT IT'S ABOUT: Stricken with terrible alien virus, deprived of her memories, tough heroine Devi Morris continues to prove her mettle aboard a doomed spaceship of hardboiled mercenaries with galaxy-alerting secrets.

WHY YOU SHOULD READ IT: It's a terrific blend of something-for-everyone: action, drama, romance, intrigue...you name it. And with this conclusion to the Paradox trilogy, there's no excuse not to dig in.

Steles of the Sky by Elizabeth Bear

WHAT IT'S ABOUT: Having amassed an army of warriors and teamed with a wizard, an exiled heir to the Great Khan finally stakes his claim to the rule the Khaganate and defeat the evil that threatens all the lands with war.

WHY YOU SHOULD READ IT: The previous books in The Eternal Sky trilogy, Range of Ghosts and Shattered Pillars, were met with wide acclaim and deservedly so. Its depiction of magic, politics and war set amongst diverse cultures makes for great reading.

WHAT IT'S ABOUT: On a faraway, sunless, seemingly idyllic planet called Eden—colonized by stranded astronauts more than 100 years ago—the several hundred members of the Family wait patiently for mankind to return. But one young member is not so complacent and sets out to learn the truth about their world.

WHY YOU SHOULD READ IT: The book, released last year in the United Kingdom, won the 2013 Arthur C. Clarke Award and was praised for it's sleek writing and gripping story.

WHAT IT'S ABOUT: Human space exploration is thrown into uncertainty when a massive artifact—an enormous bowl-shaped object that encompasses a star and contains a habitable area equivalent to many millions of Earths—is found to be headed toward the same system that Humans are trying to colonize.

WHY YOU SHOULD READ IT: Two science fiction masters team up for a classic space story filled with sense of wonder? A better question would be: Why wouldn't you read it?

WHAT IT'S ABOUT: A brilliant cellular biologist named Luke Abramson abducts his granddaughter from the hospital to circumvent the red tape that would allow him to cure her brain tumor with a new experimental enzyme. But the clock is ticking: Abramson has lung cancer and it's spreading rapidly, despite injecting himself with another experimental enzyme that reverses his aging.

WHY YOU SHOULD READ IT: Bova's premise is enticing and his books are grounded in realistic science.

WHAT IT'S ABOUT: Karen Burnham, inspired by science fiction author Greg Egan's work, took it upon herself to read his entire catalogue of challenging, mind-expanding novels, and analyze them, focusing on the weighty themes which Egan weaves into his stories.

WHY YOU SHOULD READ IT: This in-depth study is not only comprehensive, it's insightful. And the breadth of Egan's work means you get an excellent survey of the science fiction field in the bargain.

WHAT IT'S ABOUT: Set against the richly detailed Foreigner universe, in which human colonist became lost in space and set up a space station above a planet populated by the humanlike aliens known as the Atevi, a diplomat must expose an assassin before she strikes.

WHY YOU SHOULD READ IT: C.J. Cherryh's long-running Foreigner series—this the 15th book!—never fails to entertain.

The Revolutions by Felix Gilman

WHAT IT'S ABOUT: Set amongst spiritualist and occult societies of 1893 London, a young journalist-turned-accountant fights to save his fiance, who is fighting for her own survival somewhere in the vicinity of Mars.

WHY YOU SHOULD READ IT: This standalone Victorian science fiction story is a throwback to planetary romances of yesteryear where the emphasis is on adventure and fun.

WHAT IT'S ABOUT: Technology meets Big Pharma in a story where anybody with an Internet connection can download recipes and print their own drugs—even if those drugs turn out to be deadly.

WHY YOU SHOULD READ IT: Science fiction excels at asking "What if?" questions and this merging of mind-altering drugs with easily accessible technology is a great platform that does just that.

WHAT IT'S ABOUT: Set in a world where illusionary magic is possible, a couple who fell victim to a scam that cleaned them out of all their money devise a scheme to get it all back. Think: old-fashioned heist with magic.

WHY YOU SHOULD READ IT: Unlike sprawling epic fantasies where the fate of the word is at stake, Mary Robinette Kowal's quaint Regency stories a

re more intimate and personal, and thus quite refreshing.

The Forever Knight by John Marco

WHAT IT'S ABOUT: A respected knight betrays his king and loses his beloved, but is given a chance to redeem himself by becoming protector of the so-called "Inhumans"—those who live deep in the desert and who wield the power of magical powers to offset the hardships and handicaps that they have been dealt.

WHY YOU SHOULD READ IT: Unlike conventional heroes, the protagonist of The Forever Knight is realistically flawed.

WHAT IT'S ABOUT: Blaine McFadden, formerly exiled to a penal colony for killing the man who dishonored his sister, returns to his homeland to find lawlessness and an imbalance of the magic that holds the kingdoms together.

WHY YOU SHOULD READ IT: McFadden's quest to find a new magic to replace the failing one is filled with danger and adventure.

The Forever Watch by David Ramirez

WHAT IT'S ABOUT: The last survivors of humanity—on a 1,000-year journey across the stars to find a new planet to call home—are all aboard one generation starship...and one of them is a dangerous serial killer.

WHY YOU SHOULD READ IT: This mystery-in-space story features a woman who is a gifted psychic and finds purpose in her life again after she serves her society-mandated Breeding Duty.

Under Nameless Stars by Christian Schoon

WHAT IT'S ABOUT: A young exoveterinarian (a caretaker of alien animals) becomes a stowaway on a ship powered by an alien dimension-jumping beast in order to find her kidnapped father.

WHY YOU SHOULD READ IT: This sequel to Zenn Scarlett continues the story of a smart young girl who can easily hold her own in a world of conspiracies and craziness.

WHAT IT'S ABOUT: Commander Cassandra Kresnov, an advanced hunter-killer android, discovers that the same technology that allows synthetic soldiers like herself threatens all humanity with catastrophe, all while those in the government best positioned to do something are mired down in political maneuvering.

WHY YOU SHOULD READ IT: The book deftly portrays the heroine's challenge in balancing duty and family.

The Forbidden Library by Django Wexler

WHAT IT'S ABOUT: A young girl named Alice goes to live with a mysterious uncle after her father goes down in a shipwreck. There, she meets a talking cat who sneaks her into her uncle's forbidden library. She soon finds herself inside a book with no way out but to defeat the creature living inside it.

WHY YOU SHOULD READ IT: It's a magical, engaging fantasy story with worlds of possibilities to come. How can you be a book lover and not be intrigued?

¨  Elements: A Collection of Speculative Fiction by Suzanne Church

¨  The Book of Silverberg edited by Gardner Dozois & William Schafer

John DeNardo is the editor of SF Signal, a Hugo Award-winning group science-fiction and fantasy blog featuring news, reviews and interviews. You can follow him on Twitter as @sfsignal