Best of 2022: Our Favorite Nonfiction 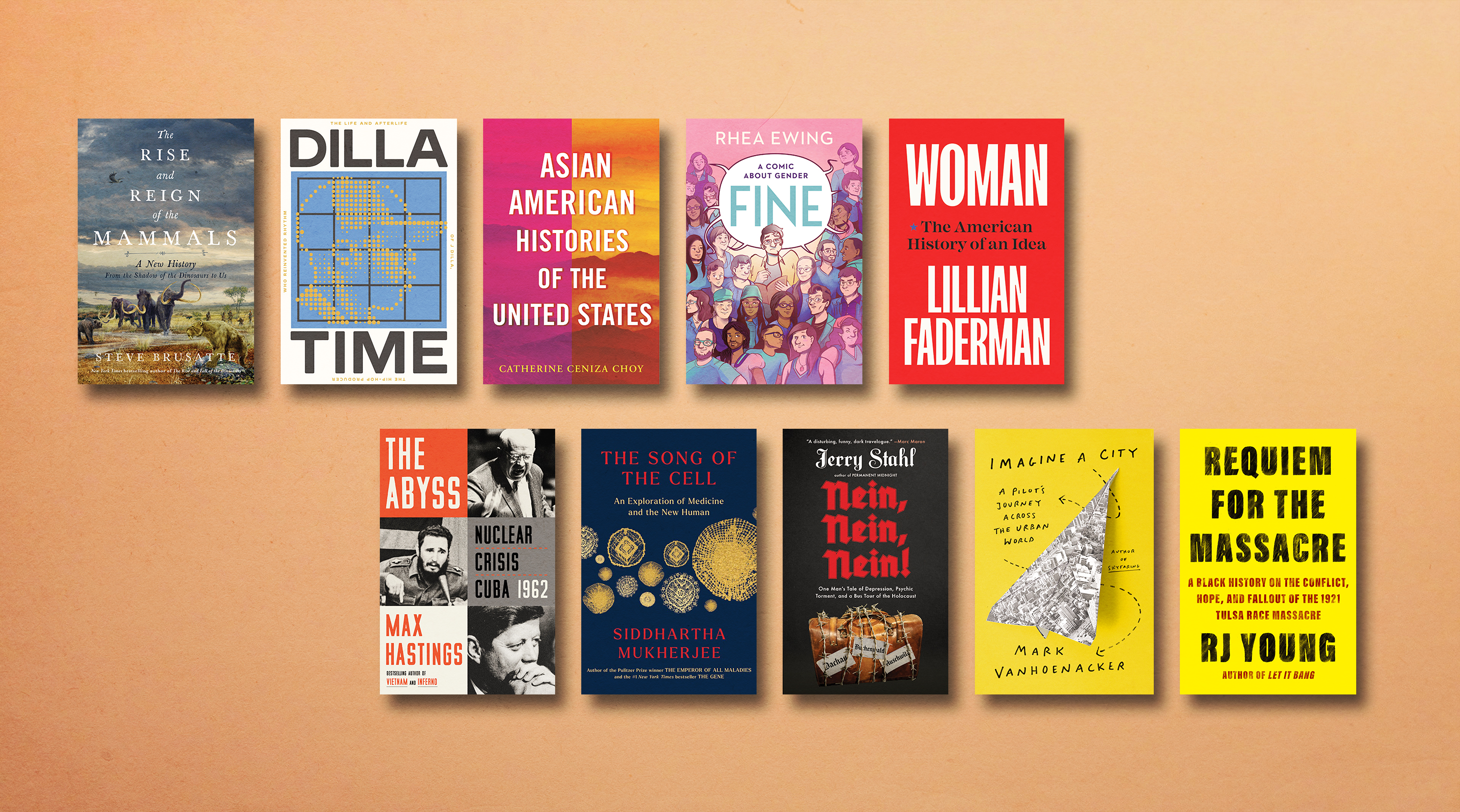 Choosing the 100 best nonfiction books of the year is always a pleasure and a challenge, but I am confident that there is something for every reader. Below are 10 books that demonstrate the diversity of the list across subject areas and genres.

Dilla Time: The Life and Afterlife of the Hip-Hop Producer Who Reinvented Rhythm by Dan Charnas (MCD/Farrar, Straus and Giroux, Feb. 1): “An ambitious, dynamic biography of J Dilla, who may be the most influential hip-hop artist known by the least number of people.…[F]ully captures the subject’s ingenuity, originality, and musical genius.”

Woman: The American History of an Idea by Lillian Faderman (Yale Univ., March 15): “This highly readable, inclusive, and deeply researched book will appeal to scholars of women and gender studies as well as anyone seeking to understand the historical patterns that misogyny has etched across every era of American culture.”

Fine: A Comic About Gender by Rhea Ewing (Liveright/Norton, April 5): “Ewing presents a uniquely straightforward, unembellished amalgam of narrative and illustration, smoothly braided with their own personal journey. The instructive yet never heavy-handed narrative boldly shows how identity is intimately interpreted and how connections with others can fortify perceptions and perspectives.” (Listen to our interview with Ewing on the Fully Booked podcast.)

The Rise and Reign of the Mammals: A New History From the Shadow of the Dinosaurs to Us by Steve Brusatte (Mariner Books, June 7): “Throughout, the author employs lucid prose and generous illustrations to describe the explosion of mammal species that followed the disappearance of dinosaurs. A must for any list of the best popular science books of the year.”

Nein, Nein, Nein!: One Man’s Tale of Depression, Psychic Torment, and a Bus Tour of the Holocaust by Jerry Stahl (Akashic, July 5): “Gonzo meets the Shoah in this wildly irreverent—and brilliant—tour of Holocaust tourism.…Stahl knows his Holocaust history…but he was also prepared to be surprised.…A vivid, potent, decidedly idiosyncratic addition to the literature of genocide.”

Imagine a City: A Pilot’s Journey Across the Urban World by Mark Vanhoenacker (Knopf, July 5): “Philosophically rich without being ponderous, belonging on the same shelf as books by Saint-Exupéry, Markham, and Langewiesche, Vanhoenacker’s book is unfailingly interesting, full of empathetic details on faraway places and lives. It’s an absolute pleasure for any world citizen.”

The Abyss: Nuclear Crisis Cuba 1962 by Max Hastings (Harper/HarperCollins, Oct. 18): “In his long, distinguished career, Hastings has masterfully covered both world wars, the Korean War, and Vietnam. In his latest, he thoroughly explores a fraught set of circumstances that almost led to World War III.…The definitive account.”

The Song of the Cell: An Exploration of Medicine and the New Human by Siddhartha Mukherjee (Scribner, Oct. 25): “In his latest, [Mukherjee] punctuates his scientific explanations with touching, illustrative stories of people coping with cell-based illnesses, tracking how the knowledge gleaned from those cases contributed to further scientific advancement.…Another outstanding addition to the author’s oeuvre.” Read our interview with Mukherjee.)

Requiem for the Massacre: A Black History on the Conflict, Hope, and Fallout of the 1921 Tulsa Race Massacre by RJ Young (Counterpoint, Nov. 1): “Tulsa native Young…offers an ambitious, forceful continuance of his debut memoir, Let It Bang, focused on his development as a consciously Black writer while dogged by the massacre’s uneasy centennial.…An arresting account of Black ambition and endurance from an important new voice in narrative nonfiction.”