A Book That Rises to the Top 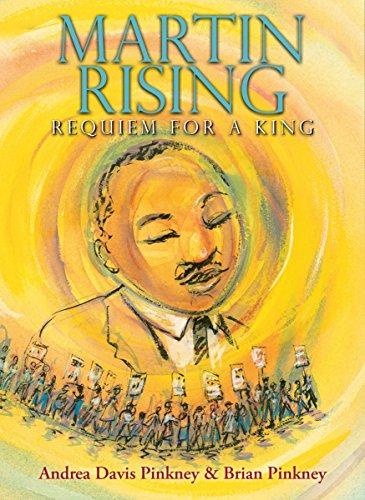 Come January of every year, one thing is certain in the world of children’s books — that readers will see brand-new picture books about the life of Martin Luther King, Jr. and his legacy. With schools all over the country celebrating Black History in February (which I hope they continue to celebrate beyond just one month), publishers are eager to get new titles into the hands of educators at the beginning of each year. And 2018 marks the 50th anniversary of the assassination of King, which means we may see even more picture books with him as the subject. This month, I’ve already seen a handful of new books about the legendary civil rights leader. One that I hope you are sure not to miss is Andrea Davis Pinkney’s and Brian Pinkney’s Martin Rising: Requiem for a King, a remarkable, lovingly-crafted tribute and one of the best I’ve seen honoring King.

This illustrated collection of free verse poems, 128 pages long, is (in many ways) not a typical biography. For one thing, though it opens with a poem featuring Martin as a boy in 1929, it focuses primarily on the final months of his life, as well as the assassination. (In fact, we go from a poem of his boyhood straight to his 39th birthday in the next spread, which is itself a lyrical snapshot of a celebration with this family, a poignant slow look at a jubilant moment in time.) And the book gives particular attention to the 1968 sanitation workers’ strike in Memphis, Tennessee.

Andrea divides the book into three abundant sections: Daylight, Darkness, and Dawn. Woven throughout her poetry, and throughout Brian’s illustrations, are vivid metaphors—King as a sun (what she often refers to as the “peach-meat sun”); the turbulent weather of Memphis in the Spring of ’68 as a stand-in for the fervent, yet sometimes dashed, hopes of those fighting for equality (a striking poem about Coretta after Martin’s assassination is called “Quiet Storm”); and even celestial flight (King’s casket in one of the final poems is illustrated with graceful, sun-colored wings attached). In one of the opening poems, relaying the plight of the Memphis sanitation workers who were refused equal pay by the city’s government, Andrea likens their struggles to that of forsythia bushes (which grow in early Spring) that have been cut down and forced indoors: “Proud, / smiling from a cold steamed window / frozen shut against winter’s final weeks.” The garbage collectors, she writes, are similarly forced to conform — to work for abysmally low wages and to work when sick. As they march, she compares the injustice they face to a “grizzly bear,” Brian’s illustration revealing a giant, stubborn sleeping bear as the hill upon which people walk with protest signs.

And our guide throughout is Henny Penny herself, the bird who stars in the cumulative folk tale sometimes called “Chicken Little” in the U.S. The one who knew the sky was falling? Yep, she’s the book’s most prominent metaphor — and our teacher and counselor. In a note at the back of the book, Andrea writes:

“She’s the one who started all of this by presenting herself to me in a dream. … [She]

is the omniscient existence of wisdom, an elder presence that illuminates, punctuates,

foretells. She is the Greek chorus in the play. … For me, Henny Penny is like the sky’s ever-

present insight. … But please interpret her as you wish. She is whatever spirit-power you

That she writes “spirit-power” here is fitting, given that the book gives emphasis to Martin’s inner life and belief in God, as well as the effect his teachings had on others. In a breathtaking poem called “Compass” — the one marking the moment of his death, laid out on dark black pages — we read: “Spiritual food / for weary souls — slain!” If it doesn’t give you chills up and down your arm to read, you might want to check your pulse.

This is a book with breathing room; most of the poems span several pages. Ten pages are devoted to one speech. The day of his death spans no less than twelve pages of poetry and artwork, beginning with “Day Breaks” (“When dawn starts to climb”), followed by a moment marking the pillow fight with King’s friends and brother in room 306 of the Lorraine Motel in Memphis; getting ready to leave the hotel for supper; King’s moment on the “fresh-air terrace of the Lorraine Motel”; and the moment of death when a shot rings out. But even before that moment, we see our “brave bird” again, Henny Penny. In a poem called “Powerless (Time-Out of Time),” she tries to take the bullet for King: “This determined bird / works her wings / with the might of a mama / protecting her young / from oncoming harm.” She is the “first to cry” when she fails. The poem following the one noting King’s moment of death is about Radio WDIA’s radio announcement that he’s perished: “The sky has fallen,” it closes.

Brian’s artwork, inspired by Marc Chagall and Norman Lewis, swoops and sings and swirls, as if it was the book he was born to illustrate. You won’t soon forget his depiction of sanitation workers in two lines, each holding a protest sign with words that “shout simple affirmations of their humanity: I AM A MAN.”