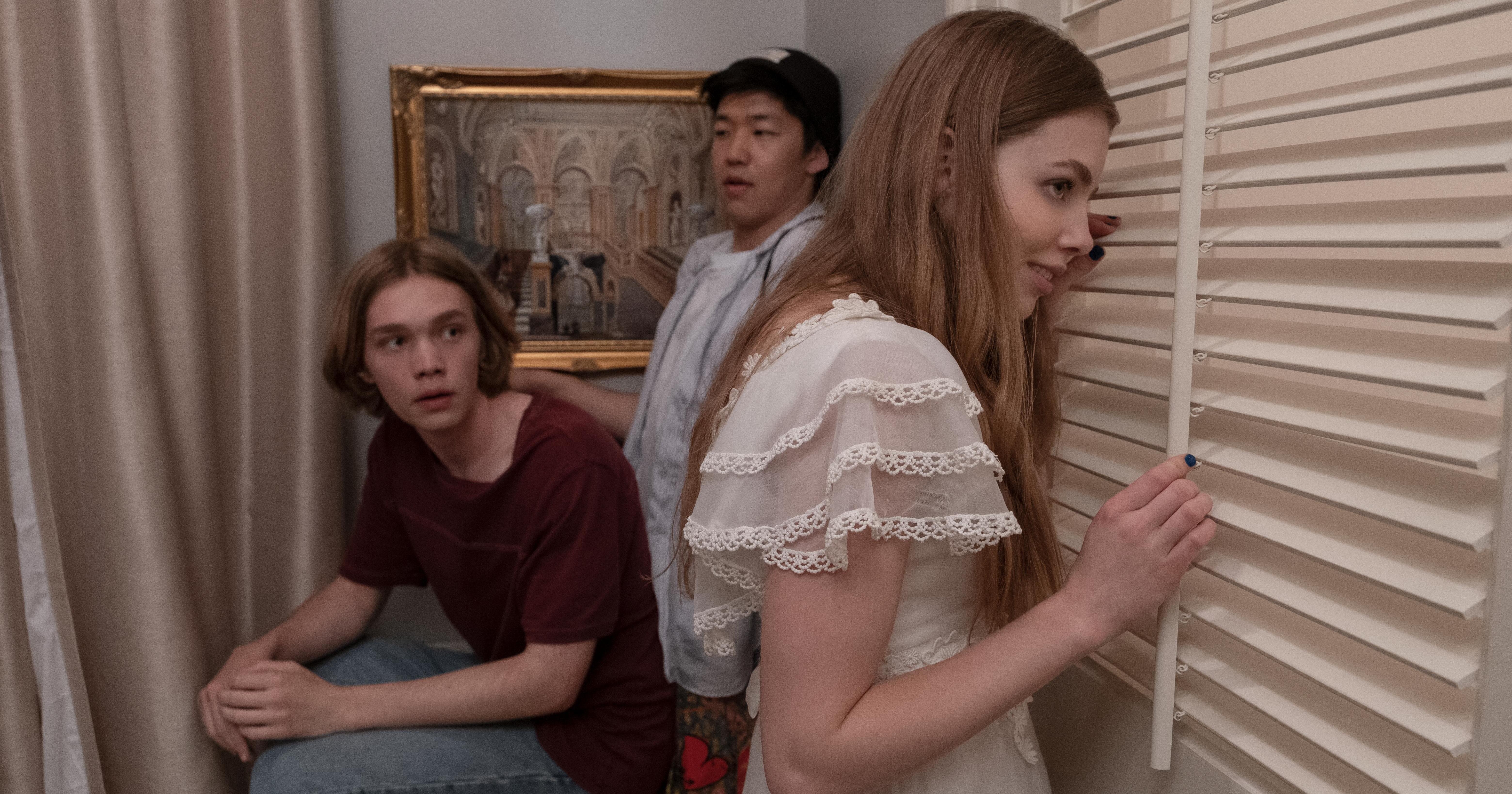 Looking for Alaska. Photo from Hulu

As schools shut down across America because of the COVID-19 pandemic, many social-distancing children and teens are looking for ways to occupy their time. Kirkus has already provided reading suggestions for the most bookish among them: “Great School Stories (If You’re Home from School)” and “Reads for Teens Stuck at Home.” But for the many young movie mavens and TV devotees, here are eight notable book-to-screen adaptations that are currently streaming—and may also bolster kids’ reading lists:

The Nancy Drew Mystery Stories, written by an array of ghostwriters under the pseudonym Carolyn Keene, have remained popular since the first installment, The Secret of the Old Clock, was published in 1930. Two recent movie and TV offerings give the whip-smart teen detective character a modern spin, but each in different ways.

The film Nancy Drew and the Hidden Staircase, released last year, presents a updated version of the second book’s adventure, also published in 1930. It stars the immensely appealing teen actor Sophia Lillis, who recently appeared in the Stephen King film adaptations It and It Chapter Two, and it brings the story into the modern era (with a sleuth who, for instance, enjoys skateboarding). However, it retains the original work’s wide-eyed tone, and will likely appeal to all ages. Available for streaming on HBO Go and HBO Now.

The CW TV series Nancy Drew, which also premiered in 2019, will appeal to older teens. It’s darker in tone and presents a slightly aged-up Nancy who confronts mysteries with a heavy paranormal element—a setup that sometimes brings to mind the long-running CW show Supernatural. Despite the liberties that it takes with its source material, it’s consistently entertaining, and star Kennedy McMann—whose mother happens to be the bestselling YA fantasy author Lisa McMann—is a revelation as the older and wiser crime-solver. Available for streaming on the CW site and app for free, with ads.

Light as a Feather

Speaking of the paranormal, this Hulu Original horror series for older teens, based on the 2018 YA novel by Zoe Aarsen, is a scary delight, as we noted in a column last year. It tells the tale of a group of high school girlfriends who decide to play the kids’ game Light as a Feather, Stiff as a Board; a new girl adds a new element to the game, which involves her predicting the manner of each girl’s death. Then one of them later dies in a car crash, which kicks off a creepy mystery. The show features great performances from actors Liana Liberato and Brianne Tju, and it has a sharp tone that fans of the Freeform TV series Pretty Little Liars will enjoy. The story’s supernatural twist will also hook teens who like the Final Destination horror film series. The second season, which premiered in 2019, goes rather far afield from the original book and its sequel, but it remains spooky fun. Available for streaming on Hulu.

Anne with an E

Lucy Maud Montgomery’s 1908 classic Anne of Green Gables and its sequels, which tell the story of the young Canadian orphan Anne Shirley, remain widely read to this day. They’ve inspired numerous adaptations over the years, including a few extremely popular Canadian miniseries and TV movies starring Megan Follows. This Netflix original series, called Anne in its initial 2017 season, features the fresh-faced Amybeth McNulty, and it also has very devoted fans—including Canadian actor Ryan Reynolds of Deadpool fame—who unsuccessfully lobbied for a fourth season. Still, the three seasons that do exist are sure to provide the uninitiated with plenty of enjoyment. Available for streaming on Netflix.

Writer/director Greta Gerwig’s stunning version of Louisa May Alcott’s 1868 novel, Little Women, is currently available for purchase from various streaming services, and it’s definitely worth a watch. However, the 1994 version, starring Winona Ryder as Jo March and Susan Sarandon as her mother, Marmee, has definite charms. Claire Danes’ performance as Jo’s sister Beth, in particular, is arguably the best of all the various movie adaptations, and the film as a whole makes for an excellent first exposure to a classic. Available for streaming on Crackle for free, with ads, and on Showtime on demand.

Hulu’s eight-episode miniseries adaptation of John Green’s bittersweet 2005 debut YA novel, Looking for Alaska, tackles some very heavy issues, and it may be too grim for some, especially during anxious times. Others will find it compelling, especially since it offers excellent performances from its young stars. Boardwalk Empire’s Charlie Plummer stars as Miles “Pudge” Halter, who forges a connection with his fellow boarding-school student Alaska Young, played by The Society’s Kristine Froseth. Green, of course, also wrote the wildly successful, tragic teen love story The Fault in Our Stars, which yielded its own hit movie adaptation, starring Shailene Woodley and Ansel Elgort. Young fans of that film—of which there are many—are sure to like this series, which also deals with deeply serious topics in engaging ways. Available for streaming on Hulu.

There are many, many movies and TV shows featuring Arthur Conan Doyle’s brilliant consulting detective Sherlock Holmes, including two films starring Robert Downey Jr.; the popular BBC TV series Sherlock, featuring Benedict Cumberbatch; and the CBS TV series Elementary, which ended last year after seven seasons. Many of these focus far more on the Holmes character than on the plots of Doyle’s original tales, and the 1985 film Young Sherlock Holmes is no exception. In its noncanonical story, a teenage Holmes first meets John Watson as they attend school together in London, and they, along with mutual friend Elizabeth Hardy, solve a mystery involving a deadly cult. Young viewers who are already Holmes aficionados will enjoy this film’s many references to future adventures, but it also serves as a great introduction for newcomers. Available for streaming on Amazon Prime Video.

The Hitchhiker’s Guide to the Galaxy

Douglas Adams’ SF comedy The Hitchhiker’s Guide to the Galaxy is an undeniable classic. It started as a BBC Radio series, then became a book series, and later, a 1981 BBC TV show and a 2005 film. (There’s even a 1984 text-adventure game, available to play online for free on the BBC site.) All versions of the story begin with the end of the world, as Earth is destroyed by aliens “to make way for a new hyperspace bypass.” Englishman Arthur Dent escapes with an alien friend named Ford Prefect, and they go on to have strange adventures with an Earth woman, a depressed robot, and the President of the Galaxy. The TV show, created and co-written by Adams, is consistently hilarious, and it has a message that’s more timely than ever in these stressful times: “Don’t Panic!” Available for streaming on Hulu.