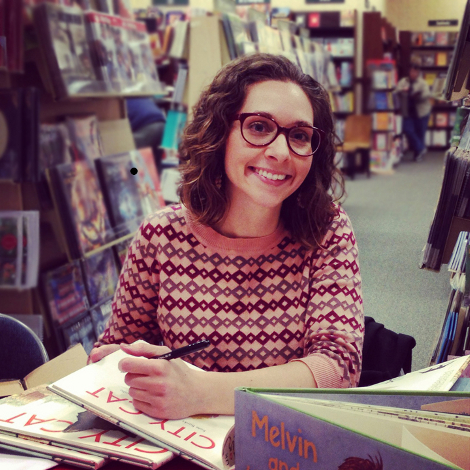 Lauren Castillo is one of my favorite illustrators. I fell in love with her style, which to me is in many ways reminiscent of the work of the late Margot Zemach, back in 2007 when her first illustrated book was released, Emily Jenkins’ What Happens on Wednesdays. And Castillo seems to get better with each book.

The Troublemaker, her newest book, brims with mischief. A young boy, holding a plush toy raccoon, tricks his sister by stealing her stuffed bunny one day in the midst of a tea party she’s having outside. All the while, an actual raccoon is observing the events and later takes the bunny, as well the boy’s own toy raccoon, named Rascal, and a handful of other items. The family blames the boy, of course, and both brother and sister go to bed sad. In a lovely, gentle spread with just two short sentences, Castillo communicates the sleepless boy’s sudden understanding that being tricked isn’t all it’s cracked up to be. (“I miss Rascal…I bet Sister misses Bunny, too.”) This moment of empathy, not at all forced, rings true.

Later, in a very funny spread, the boy spots the real “sneaky raccoon” in the tree, snoozing and cuddling with all the toys and a blanket he’d stolen.

I snagged Lauren in the midst of a busy travel schedule to see if she could chat a bit about the book. Naturally, the co

nversation turned to the recent loss of legendary editor Frances Foster, publisher of Frances Foster Books at Farrar, Straus and Giroux, who passed away early this week.

It occurred to me the first time I read this that the raccoon is a relatively underused character in children's lit. What made you want to tell this story? Did you grow up with troublesome siblings?

I have a younger brother, but he isn't too much of a troublemaker. He did, however, spark the idea for this story. In 2009, he was living in Manhattan at the northern tip of Central Park and would tell me about sneaky raccoons with glowing eyes that followed him down the street at night. I found that visual amusing, so I began researching and came across a hilarious video of a raccoon that reaches through a dog door and makes off with a family's doormat. I could only imagine what other loot that raccoon had collected. Those were the first bits of inspiration.

I am always impressed how you keep your picture book texts simple, yet engaging and not dumbed-down for early readers. Do you tend to write first—and then illustrate?

The Troublemaker began in my sketchbook with some scribbles of a mischievous raccoon. Next, I wrote a rough (and very wordy) draft of the manuscript, followed by a loose storyboard. I knew that I wanted to tell a great deal of the story through my illustrations, which meant that much of the original text was not going to be necessary. I think I was still tweaking words until the last stages of final art.

I know you worked closely with editor Frances Foster. What did her guidance mean to you?

I first met Frances in 2004 when she came to my graduate class at SVA as a guest critic. I remember feeling very nervous as I presented her with my thesis picture book project. She was the first editor to look at my work—and a legendary one at that. Frances gave me wonderful and honest advice and kindly offered to look at more of my art. Upon graduation in 2005, I sent her new illustration samples and received a very exciting and unexpected email a couple months later with a manuscript by Emily Jenkins, titled What Happens on Wednesdays. I was all aflutter by the book offer that I responded to her email with a “WAHOOOOO!”, thinking that I was forwarding on the news to my family. She wrote back right away and said very calmly that she was glad that I was enthusiastic about the story. Needless to say, I was mortified! We had a good laugh about that later, when we got to know one another better.

I had the opportunity to make five books with Frances before she retired in 2013. During that time, we grew close, and I very much thought of her as my NYC family. She was an extraordinary editor, who always encouraged me to trust my creative instincts, something that isn't the easiest to do when many people are involved in the making of a book. The faith she had in her authors and illustrators made all the difference, and that kind of trusting collaboration is what leads to the strongest, most successful, outcomes.

Frances was such a blessing in my life, and I will miss her dearly. It was the greatest honor to begin my career in publishing under her wise and gentle guidance.

My next book as author, Nana in the City, comes out this fall. The story is a love letter to the city, inspired by three very special city-dwelling nanas in my life—Frances Foster, my Great-Aunt Virginia, and my Nannie. The book is about bravery and the importance of venturing out of your comfort zone. This book is especially near and dear to my heart, and I'm excited to introduce Nana to readers later this year.