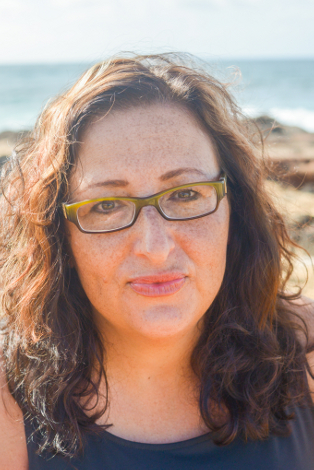 Monica Brown’s latest picture book, illustrated by Caldecott Medalist David Díaz, honors her family’s heritage in more ways than one. Maya’s Blanket/la manta de Maya is written in both English and Spanish, a tribute to her Latina heritage, and it’s a story based on the time-honored Yiddish song most commonly known in English as “I Had a Little Overcoat,” honoring her Jewish ancestors. It’s also a story, as Monica discusses below, blending realism and a bit of magic, something with which she is very familiar.

I interrupted Monica’s teaching—she’s a Professor of English at Northern Arizona University, specializing in U.S. Latino and Multicultural Literature—to talk to her via email about this book, her chapter book series Lola Levine, and the great value of bilingual picture books for students of all ages.

Can you talk about being inspired by both your Latina and Jewish heritage to write this picture book based on the legendary Yiddish folk song?

I am honored to be a child of two continents and two religious traditions, and it has been a delight to be able to bring different aspects of my history together in my writing for children. Now more than ever, as borders are being drawn tighter and rhetoric around immigration and “others” inspires fear, we need to emphasize what connects us. Children’s books are a place of imagination and joy, and I’ve trie

d to capture that with Maya’s Blanket/la manta de Maya.

As a Peruvian-American, magical realism/lo real maravilloso has made an indelible impact on my writing. I read One Hundred Years of Solitude by Gabriel García Márqez when I was 17, and it changed my life forever. Never had any book so captured my family history, as well as the expanse of South America in my imagination and in the reality of my travels back and forth to my mother’s childhood home in Piura, Peru, and our family circle in Lima. I knew then that mine would be a literary life, surrounded by books. Like my idol, I went off to have an adventure and work as a journalist (in Mexico) after I graduated from college. I then went to graduate school and wrote about and taught Latino/a literature for a decade.

Then, I started creating it for children. One of the first children’s books I wrote was the biography My Name is Gabito: The Life of Gabriel García Márquez/Me llamo Gabito: la vida de Gabriel García Márquez, illustrated by Raul Colón, followed by my magical realist adventure Chavela and the Magic Bubble, illustrated by Magaly Morales. Maya’s Blanket is my most recent magical, multicultural creation, written with love and in memory of my grandmother, who taught me to sew, and honoring my Jewish grandfathers.

I’ve always loved the Yiddish folk song “Hob Ikh Mir a Mantl,” because it emphasizes creativity and recycling and, in my interpretation, the ways poverty or lack cannot limit our imagination. I’ve added my own magical realist perspective to the story. Maya’s magical manta protects her from bad dreams, and when, “with her own two hands and abuelita’s help,” she makes it into a vestido, the dress doesn’t let her fall, even when she twirls and swirls at her cousin’s quinceañera. Later in the story, her rebozo doesn’t leave anyone out, and her magical bufanda keeps her from blowing away in the fierce winter wind. And the circularity and surprise of the ending is the most magical of all, but I won’t spoil it.

I like how you incorporate the Spanish text into the story—with enough context to provide meaning for children who read only English.

Even though I am bilingual, English is my first language. I think translation is an art form, so it has been important to me to collaborate with a professional translator and native speaker—in this case, the amazing Adriana Dominguez. Each and every word is chosen with thought and care. Adriana; my Lee and Low editor, Louise May; and I have deep discussions (and sometimes debates!) about translation, and I think this commitment shows.

Maya’s Blanket affirms multiple literacies. The English and Spanish are side by side on the page, allowing for multiple reading experiences for speakers of English, Spanish, or and those learning either. I am an advocate of bilingual education and bilingualism for all, so even my English-only readers leave the text with an understanding of a several Spanish words through context and a glossary (including pronunciation) in the back. There is a musicality to Spanish that works wonderfully in this book, and all can appreciate it.

What do you see as the value in providing bilingual picture books for children of all backgrounds?

When I do school visits, I introduce myself in Spanish first and then in English. You can’t imagine the surprise I see on the faces of children, regardless of the demographics of the school. I’ve learned that it is a rare thing, indeed, and quite powerful to have a special guest, at the front of the assembly, celebrating a language that is sometimes denigrated by the English-only movement. I’ve incorporated music into several of my books, and I try to teach children at least one song or refrain in English and Spanish—to the delight of them all. Books, art, theatre, and music really can act as a bridge toward understanding and affirmation of the multiplicity of our beings.

How does your teaching inform your writing?

Because I am a Professor of Literature who specializes in U.S. Latino/a, African American, and Multiethnic Literature, I’ve been inspired to write picture book biographies of several of my favorite authors, including Gabriela Mistral and Gabriel García Márquez. Most recently, I published Pablo Neruda: The Poet of the People, illustrated by Julie Paschkis. I introduce literature to children, as well as college students, and I truly see the power of words acting in their lives in support of empathy, understanding, modeling, and inspiration.

What was it like to see David's illustrations for your text?

Seeing final art is always one of the most fabulous moments for me. To know my literary DNA inscribes these paintings is a wonder and a privilege. David Díaz’s work for this book is just beautiful. Blue and turquoise are my favorite colors (they were my mother’s as well), and these colors imbue each and every page and Maya’s manta itself. David’s work is somewhat ethereal and layered in Maya’s Blanket, which matches the text perfectly.

I am incredibly excited about my new chapter book series from Little, Brown, starring the fierce and funny Lola Levine. The first book in the series, Lola Levine is Not Mean!, debuted this fall. The second book, Lola Levine: Drama Queen, just dropped. This is one of the first, if not the only, chapter books series both written and illustrated by Latinas and featuring a multiracial protagonist. The book has had a terrific reception so far and, in addition to my picture book Marisol McDonald Doesn’t Match/no combina, it’s my most personal and semi-autobiographical effort. These books represent my desire that our multiracial and multicultural children are not considered “fractions” but rather celebrated for containing multitudes.

Finally, you can be the first to know about my one of my next picture books. It has been really difficult to keep secret! I am very happy to announce Frida and her Animalitos, which will be illustrated by my dear friend and collaborator John Parra. This will be our third book together and is due out from North/South books in 2017.