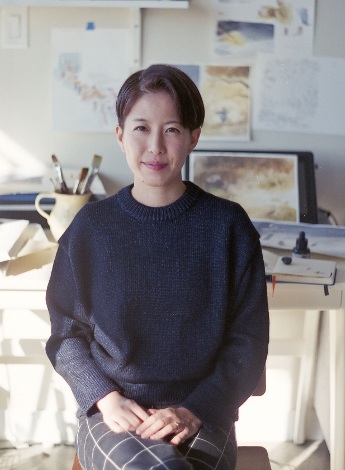 My interest is piqued when a picture book illustrated by Qin Leng lands on my desk. The award-winning Toronto-based illustrator, born in Shanghai, has been illustrating picture books since 2009, her lively ink-and-watercolor artwork so evocatively capturing body language and emotion. This prolific illustrator saw the publication this month of Jessica Scott Kerrin’s The Better Tree Fort, which tells the story of young Russell, who builds a tree fort with his father. Russell’s tree fort may not have been built by a construction crew, like the tree fort three houses over, and have a skylight, working lights, a “slide for quick escapes,” and bunk beds with pillows—but it does have Russell’s dad, who built it with love and care. As you’ll read below, it’s a story close to Qin’s heart, given her love for her own father, also an artist.

I took an opportunity, with the publication of this new picture book, to interrupt Qin’s painting and talk to her via email about her work.

You used to create animated short films. Do you still do that? How do you think that training informs your picture book artwork?

I graduated from the Mel Hoppenheim School of Cinema at Concordia University. While in school, I had never imagined I would be illustrating picture books a few years later. Film animation was my thing, and I loved it. In those three years at University, I made four films. When I graduated and moved to Toronto to work as a layout supervisor on television shows, I still worked on animated shorts in my spare time. These weren’t made for any particular purpose, other than for my own enjoyment. However, when I started landing more picture book projects, making short films was too time-consuming. It is extremely labour-intensive and, with a full-time job and books to illustrate during the evenings and weekends, there just wasn’t enough hours in a day to do anything else.

My education in Film Animation has helped me in my illustrative work in so many ways. All my animated shorts were done traditionally with every single image of animation drawn on paper. (That’s about 12 drawings per second.) To give you an idea, an eight-minute short film would mean hundreds of pages of illustration. I think this intense practice has allowed me to perfect my drawing skills, as well as the speed at which I can create an image. In other words, I have learned to draw efficiently and quickly. Animation is also all about the art of giving life to characters using expressions and body language. By far, this was the part I enjoyed most—how to show shyness by a subtle lift of the foot and arced ankle, or how to show disappointment by a little pout, lower lip pushed forward. This experience has helped me tremendously when working on the character development in my books.

What do you love about illustrating children's books?

I enjoyed drawing from a very early age, and even before I enrolled in Film Animation, I always loved to draw children. Their energy, spontaneity, the purity and honesty of their emotions—all of that makes them the best subjects to portray. They have such an incredible range of expressions and emotions. When I decided to break into the field of illustration, I didn’t even need to think where I wanted to try out my luck first. Children’s book publishing was the only place I wanted to start.

I read that your father was an artist and influenced you. Can you tell me about his artwork? Was he a professional painter?

My father, Leng Hong, was classically trained in Chinese-style watercolor paintings back at the Shanghai University of Fine Arts. However, when my twin sister and I were about three, he made the difficult choice of moving to France alone. He wanted to learn and experience Western Art in person and incorporate it into his Eastern way of painting. He now works with acrylics on canvas or rice paper, and his work is an incredibly interesting mixture of East and West. You can find those classical watercolor-like washes in his large-scale pieces, but you will also find rich textures, which he achieves by applying a thick base coat of gesso to create cracks and bumps. His work depicts women of the Tang Dynasties — but who are painted to look like ancient European frescoes. I admire my father’s drive to leave everything behind him for his artistic search. He was only 31 years old, had 150 francs in his pocket, and had no knowledge of the French language.

My father has taught me what hard work means and that being good isn’t enough, because you can always get better. Interestingly enough, his move to France didn’t only help him. The rest of the family (my mom, my sister, and I) later joined him in Bordeaux. Growing up and reading French books, illustrated by French artists, has greatly influenced my style today.

To this day, my father is passionate about his work. I know he will never stop painting, and neither will I stop drawing. We are similar in many ways. We both work every day and, I think, would feel physically ill if we were unable to draw or paint for a long period of time. He currently lives and works in Montreal but mainly exhibits his work in Asia and France.

So, you moved from Shanghai at a very young age. Do you visit often?

Yes, I left Shanghai when I was four years old. So, I don’t remember much, other than from photos. I returned for the first time when I was 12, and it was a real culture shock. The amount of people, the high-rises, the shops that seemed to be open 24/7, the lights, the foods and smells—everything was overwhelming, and I loved it. I have returned every other year after that. But with my busy life here in Toronto, I haven’t had the chance to visit in many years. A good portion of my family is still living in Beijing and Shanghai, and I often think of returning for a visit. I have to admit, however, that I find the 13-hour flight very daunting!

What do you look for in picture book manuscripts, the ones you end up illustrating? What drew you to Jessica’s The Better Tree Fort?

I have had the chance to work on many different projects—from poems to fiction and nonfiction, board books, picture books, novels, chapter books, grammar books, news articles, and magazines. To be honest, I have enjoyed all those experiences. I love the variety, as it challenges me to figure out the right approach each time: What medium (should I ink with nib or brush to give it a classic look or more flowing feel?) and what style (should I draw with more detail and realism for an older audience, or simpler and whimsical for young readers?).

That being said, I consider a good picture book manuscript one that isn’t too lengthy and offers just the right amount of description, leaving me plenty of room to add my own stories to the main story. Images can pack so much information, and I really enjoy adding those extra touches here and there — a dog doing his own thing in the corner of the page, or some neighbours next door, going about their day. These are small details that I think a reader would enjoy pausing for.

Another thing I look for in a good project is whether the story speaks to me and moves me in some way. The Better Tree Fort did just that. As I have mentioned earlier, I really look up to my father, and we are very close. When I read the story, it took me back 30 years to our small apartment in Bordeaux, France. We had just immigrated, and my parents didn’t have enough money to buy us toys. So, my dad bought some cheap plywood and built my sister and me a dollhouse! It was so big (or maybe we were so small) that we could actually crawl and fit inside. It was the most memorable gift, as we watched him build it a little every day. My dad isn’t what you call a handyman, just like the dad in The Better Tree Fort. So the house wasn’t perfect, by any means, but it was to us— because he had made it with his own hands.

Who are some artists who inspire you?

As a child, I loved drawing and reading. I remember spending hours in bookstores and libraries and enjoying it so much that it was as if time stopped in those moments.

I grew up in France and read a lot of fantastically illustrated books, such as Le Petit Nicolas by René Goscinny and Jean-Jacques Sempé and Ernest et Célestine by Gabrielle Vincent. These illustrators have really inspired me, and I always go back to their work whenever I feel I’m in a slump.

Going back to those classics is important to me, but it is equally important to look for new inspirations. I find it in many current illustrators, such as Beatrice Alemagna, Manuele Fior, Gipi, Nicolas de Crécy, and Isabelle Arsenault. The list goes on. There are so many incredible children’s book illustrators these days. I discover new gems almost daily.

In January, I published my debut picture book as author and illustrator with Comme des Géants. It is called Je suis Petite and in October will be released in English with Kids Can Press as I am Small. I am working really hard on writing something new. I would like to publish more of my own stories, as well as continue illustrating books written by talented authors.

I am also currently working on a picture book called New Year, written by Mei Zihan, with China Children’s Press and Publication Group; working on another picture book with Groundwood Books, Saumiya Balasubramaniam’s When I Found Grandma; and finishing a project with Kids Can Press, called Mine Yours, written by Marsha Diane Arnold. I will soon start a new and exciting project with Tundra Books, called Skinnamarink by Sharon, Lois & Bram; Over the Shop by Jon Arno Lawson, published by Candlewick Press; and, finally, Le bungalow a des crocs, a chapter book written by Annabelle Fati and published by Sarbacane.