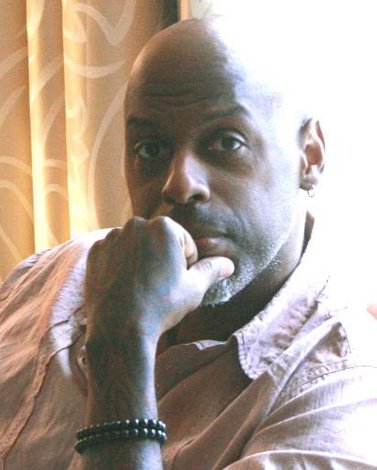 Fine artist, graphic designer, and illustrator Charly Palmer, who makes his home in Atlanta, describes the chance to illustrate Kathryn Erskine’s Mama Africa!: How Miriam Makeba Spread Hope with Her Song as “a dream come true.” Having been inspired as a child by the illustrations in Ezra Jack Keats’s The Snowy Day, which to this day informs his own use of color and geometric shapes, Palmer’s life is one of art, design, education, and a passion for history. He is keenly interested in African American historical content, as he puts it on his site, with special attention given to the Civil Rights era.

His debut in the world of picture books, which tells the story of Grammy Award-winning South African singer Miriam Makeba, came to Palmer out of the blue. After

art director Anne Diebel and editor Grace Kendall saw his work online, he tells me in an email conversation, they reached out to him about illustrating his first children’s book. “Because I have always had a great love and affection for children's books,” he says, “this was an exciting opportunity for me, one that I wasn't willing to pass up.”

Erskine’s book brings readers the compelling life and career of Makeba, born in 1932, who “sang as soon as she could talk and danced as soon as she could walk.” Growing up in South Africa, then a world of racial segregation and discrimination, Makeba sang protest songs at an early age in Johannesburg. “Bravely, she sings out,” writes Erskine, who spent some of her childhood in South Africa. “Like a nightingale.” And she took her protest songs all around the world to educate and inform others of the terrors of apartheid. “She sings of police raids.… She sings of her people being jailed.… She sends them strength with her song.”

Palmer’s textured, thick-stroked paintings with dynamic yellows, deep blues, and rich greens and reds, capture the South African landscapes, Makeba’s vibrant personality, and the struggles and sorrows of apartheid. Palmer was taken by Erskine’s manuscript. “I was already familiar with Miriam Makeba and her life,” he says. “Reading Kathryn’s text provided me with deeper insight into Miriam’s influences and how she became who she was. Learning facts, such as how heavily she was influenced by the work of Billie Holiday and Ella Fitzgerald, was absolutely enlightening.”

Palmer dug into his own research, watching videos of Makeba and reading articles. “Learning more about her was important to me,” he explains. “It was important that my images do justice to Kathryn’s text and Makeba’s life.”

Palmer---who now sometimes paints under the name “Carlos,” giving him some creative freedom to experiment--- owns his own design studio and also teaches design, illustration, and painting (most recently at Spelman College). “What I love about teaching,” he tells me, “is that, because I’ve been doing this for longer than 25 years, many of the things that I do are automatic. Teaching forces me to articulate what I already know.”

Most recently, he has been working on a documentary art film, inspired by the 1968 Memphis street sanitation strike and I Am a Man, Sanitation Workers Strike, Memphis, Tennessee, the famous photograph by Ernest C. Withers. The project “involved a collaboration of six African American artists,” Palmer explains, “working on one canvas. It stalled when I wasn't able to raise the funds needed to produce the movie. It is my hope that funds will become available to bring this very important and powerful project to life.”

“I recently just completed a very special and exciting project with the Green Bay Packers through Sports and the Arts,” he adds. “As a Milwaukee native, it was an honor and privilege to be selected to create paintings of legendary players, like John Brockington and Ray Nitschke, along with several others.”

As for children’s books, he says he’s eager to do one again, particularly books that capture the experiences of black people. “I have always had a love for children’s books. In my travels to South Africa, my experiences greatly altered the direction of my work. Art affords me the freedom to express what I love, and what I love is black people and the various aspects of black culture. Much of our youth are drastically underexposed to their history, and that saddens me.  Continuing to take on black children’s book projects allows me to bring to life the stories of our people.”