Christmas with Red and Lulu 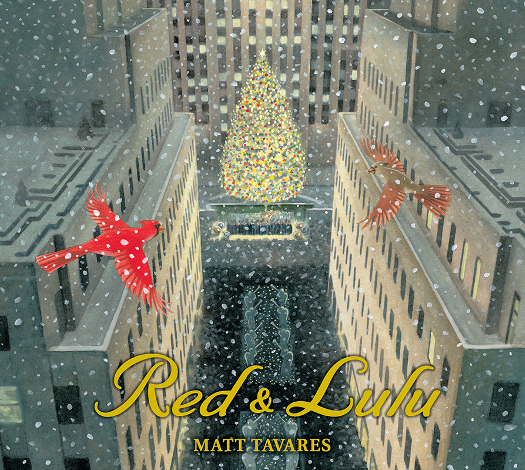 You’ll see a lot of new holiday picture books on shelves this year, but one you’ll want to be sure to pick up is Matt Tavares’s Red & Lulu. It’s the story of a pair of cardinals, who make their home in a large evergreen tree in a family’s yard. When Red and Lulu are separated one day—the tree, with Lulu inside, is taken from the yard—we take a journey with Red, as he pledges to follow her. The adventure turns epic when the trip takes Red to Rockefeller Center in New York City where the evergreen is placed.

It’s a tender story of friendship, one that the Kirkus review calls “touching [and] beautifully illustrated.” It also closes with a note about the history of the Rockefeller Center Christmas Tree. As you’ll read in our chat below, which Matt and I conducted via email, the book has been years in the making.

Jules: Hi, Matt! Thanks for chatting with me about Red & Lulu. As I type the title, I wonder: Where did you get the name “Lulu”?

Matt: For the female cardinal in Red & Lulu I picked the name “Lulu," because it has a nice musical sound to it, like a cardinal’s song, but it is also recognizable as a name. I also liked how the two names, Red and Lulu, sounded together. And I like how they look together on the cover, with the ampersand between them, instead of the word “and.”

Jules: I see in tiny print in the book’s closing acknowledgments that two cardinals frequent your backyard and inspired this story.

Matt:Yes, the cardinals in Red & Lulu were inspired by a pair of cardinals who have visited my yard for years. (Honestly, I don’t know if it’s the same pair, but I like to think that it is.)

Jules:When did you first start writing this?

Matt: When my kids were little, it turned into sort of a game, where we’d notice the bright red male cardinal out at the bird feeder [in our yard], and we’d try to find the female cardinal. And sure enough, she was usually nearby. It made me wonder what would happen if they ever became separated, and how far one might go to find the other. I felt like there was a story there.

Meanwhile, I was working on a nonfiction picture book about the Rockefeller Center Christmas tree. I first started writing that manuscript in late 2011 and submitted a draft to Candlewick in 2012. They liked it but asked if I could add some characters to make it more appealing to kids. At that point, I was thinking it would be a book along the lines of David Macaulay’s Castle or Cathedral, where I would tell, step by step, how they find the tree, how it's transported to the city, how it’s decorated, etc. At my editor’s suggestion, I started working on transforming it from a nonfiction book about the Rockefeller Center Christmas tree to a fictional story with the tree as sort of a backdrop. At first, I focused on human characters, but that got too complicated and never really worked. Eventually, in December of 2013, it occurred to me that maybe the cardinal story and the Christmas tree story could actually fit together. And that’s when I wrote my first draft that included the characters, Red and Lulu.

Jules: So, this book (the manuscript) is well past toddlerhood and in its sixth year of life.

Matt: Yes, I’ve been living with this story for a very long time! In fact, even after I submitted that first draft of Red & Lulu in late 2013, it still had a long way to go. That draft was about a thousand words long, but my editor asked if I would consider trying to turn it onto a wordless book. I loved the idea and spent a few months working on it. Parts of it worked really nicely, but other parts just didn’t. So we created sort of a hybrid of the two versions, leaving some spreads wordless, and adding words where they seemed necessary. The final book has about 450 words, I think.

Jules: Is it true that your agent actually once had a bird stowing away in her own Christmas tree, just like in this book? I have never heard of such a thing, but at the same time, I can believe it.

Matt: Yes, it is true! But it was a bat, not a bird. Back when I was trying to figure out how to add characters to the nonfiction version of my story, she told me about the time her family was decorating their Christmas tree and a bat flew out of it!

Matt: That gave me the idea to focus on animals instead of humans, which ultimately led me back to that pair of cardinals in my yard.

Jules: You visited my site, 7-Imp, back in 2010 and talked about how you’d recently started working in watercolor and gouache. You’ve pretty much been consistently doing this since then, yes? And that’s how these illustrations were rendered.

Matt: Yeah, I’ve mixed it up for a couple books, using pencil and ink here and there, but for the most part I’ve been using watercolor and gouache for the past decade or so.

Jules:What is it about working in opaque watercolors that you enjoy?

Matt: I like working with gouache (opaque watercolor), because it allows me to work back into darker areas with lighter paint, which is something you can’t really do using watercolor alone. The gouache allows the process to be a bit more organic, where I don’t have to plan everything out quite as much as I would if I were just using watercolor. The art in Red & Lulu is almost all watercolor, except for things like falling snow, city lights, and lit windows, for which I mostly used gouache. I also like watercolor and gouache for practical reasons. Acrylic and oils both require much more preparation and clean-up at the beginning and end of a work day. With watercolor and gouache, I can just sit down and get to work. And the paint dries relatively quickly, which allows me to keep moving forward instead of waiting for paint to dry.

Jules: I read the New York Times review of this, Maria Russo referring to the “gorgeous sweeping vistas” of the book. Do you work from photos when painting cityscapes?

Matt: Yes, I did use reference photos for the cityscapes in Red & Lulu. I took a couple trips to New York City when I was working on the book and wandered around trying to imagine where Red might go on his journey. Some scenes were pretty straightforward and required only one decent reference photo, like when Red visits one of the lions outside the New York Public Library. But for the most part, my illustrations were imaginary scenes for which I used several different reference photos for different details. And then I’d use my imagination for things like perspective, atmosphere, weather, lighting, etc. For aerial images, Google Earth really came in handy. I’d start at the George Washington Bridge and take a virtual flight over Manhattan, finding interesting places for Red to fly. That was fun.

Jules: I hope you have enjoyed the enthusiastic response to your lovely book (word-of-mouth, reviews, etc.). A friend of mine in a phone conversation yesterday—and she does not work in the field of children’s lit, as many of my other friends do—told me out of the blue about how she was going to go buy your book. Congrats on a beautiful, and beautifully-illustrated, story.

Matt: Thank you! Wow, that’s so nice to hear about your friend. Funny, even after nineteen books, it still sort of blows my mind that people I’ve never met in places I’ve never been are reading this story I spent years thinking about — and looking at these illustrations I sat here by myself in my studio painting. I especially feel that way with this book, because I lived with it for so long before it was finally published. It’s still a bit surreal to see strangers reading it and sharing it.

Yes, the response to Red & Lulu has been amazing. I never know how these things are going to go. I’ve had books that have come out and just sort of disappeared, and I really didn’t want that to happen with this one. This book really means a lot to me, so it’s so gratifying to know that it’s finding an audience, and people are saying such nice things about it. I wish I didn’t need that external validation, but I do! And I am extremely grateful for it.

Jules: What’s next for you?

Matt: Right now I’m working on a picture book with Candlewick Press, called Dasher. It tells the story of how Santa’s reindeer became Santa’s reindeer. I just started final art on that one, and it’s slated for Fall, 2019.