A Collage of Horror 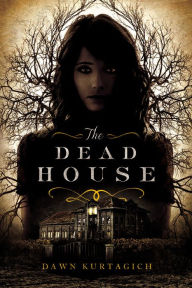 In the early hours of 2 February 2005, a fire at Elmbridge High School in Somerset killed three and injured twenty. For two decades, little was revealed about the tragedy. However, rumors flooded the internet, linking “Kaitlyn” Johnson, “the girl of nowhere,” to the blaze. This was nothing more than wild speculation.

I’ve been on a bit of a horror kick lately—specifically, I’ve been watching lots and lots of haunted house movies. And holy cow, the influence of The Blair Witch Project—a full 15 years after it was first released—is still being felt: lots of fictional found footage, lots of stories about people looking to jumpstart a career through paranormal investigations and ghost-chasing, lots of stories about people revisiting unsolved mysteries and urban legends.

Now, with two upcoming books—Dawn Kurtagich’s The Dead House and Micol and David Ostow’s The Devil and Winnie Flynn—that longtime trend seems to be working its way into YA fiction. Both are collage-style novels, incorporating various formats to tell a larger story: Kurtagich uses diary entries, instant messages and emails, transcriptions of interviews, and descriptions of film footage; Ostow’s book incorporates illustrations, comic panels, and excerpts of a screenplay into a larger letter-to-a-friend-back-home framework. Based on my affection for the subgenre and for collage-style books, I had high

hopes for both—now, after reading The Dead House, I still have high hopes for The Devil and Winnie Flynn.

The Dead House is ambitious, I’ll give it that—there is a LOT going on, and Kurtagich makes a valiant effort to integrate all of the various pieces into a cohesive whole. Said effort is not entirely successful, but I’d rather read a book that shoots high and falls short than one that simply shoots for mediocrity.

Boarding school student Carly Johnson is being treated for dissociative identity disorder, which her doctor believes originated the same night she witnessed the death of her parents. Carly—and Kaitlyn, who the doctors believe is her alter—maintain that Kaitlyn has always been there, and that they are two sisters living in the same body. Carly has control by day, Kaitlyn by night—they share their body, but never their consciousness—and they communicate via a Message Book and purple Post-It notes. The doctors, though, are convinced that Kaitlyn needs to be eradicated, integrated back into Carly.

That storyline on its own would be PLENTY to carry an entire book, but The Dead House doesn’t stop there: also figuring in are practitioners of fictional form of Scottish folk magic*, a younger sister whose foster mother is trying to keep her from Carly and Kaitlyn, romance, a missing friend, two decaying houses (one in the physical realm and one that may or may not be imagined), a malevolent spirit (also possibly imagined), and multiple murders. With so much going on and so many characters on the move, it’s ultimately an extremely chaotic read, with very little in the way of emotional engagement. The tone of the dialogue and the narration vary wildly, from intensely overblown (which, to be fair, is in keeping with Kaitlyn’s personality) to just plain flat (mostly in the descriptions of the video footage, which, again, is appropriate for the format).

Ultimately, the book reads like the novelization of a horror movie: despite Kaitlyn’s near-constant internal distress, the external details—again, mostly due to the video footage passages—get far more of the spotlight than any sort of atmosphere, the relationships, or any sort of emotional core. In that way, it would be a decent pick for fans of Laurie Faria Stolarz’ Welcome to the Dark House, though Stolarz’ book is a much tighter, more linear read.

*While fictional, that whole storyline made me uncomfortable—according to the Author’s Note, that storyline was “inspired by a childhood of travel and exposure to various cultural, tribal, and religious beliefs”—and it felt like some sort of melting pot of cultural appropriation.