Dealing with Life After War 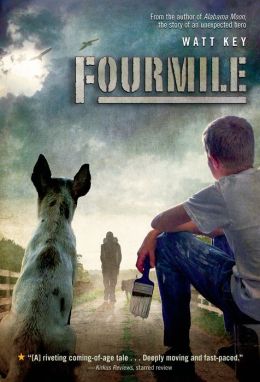 In honor of Veterans Day tomorrow—you have the day off, I hope?—here are seven books that feature veterans dealing with post-war life:

Middle schooler Foster lives with his mother on a failing farm in Fourmile, Alabama. Her no-good boyfriend is violent and abusive, but when Foster strikes up a friendship with a guy who’s passing through town—who happens to be a former Army Ranger with his own plateful of issues, secrets and demons—everything changes. I loved Alabama Moon for all of the survival stuff, but even more so for Moon’s voice: As I’ve seen praise for Foster’s voice in multiple places, I’m really looking forward to finally picking this one up.

This was the last of White’s Echo Company books, and deals with nurse Rebecca Phillips’ re-entry into civilian life after serving in Vietnam. This is the only YA title I’ve come across thus far about a female character dealing with PTSD; the fact that it’s by Ellen Emerson White has me assuming that it’ll be emotionally complex, rich and nuanced.

The Summer I Found You, by Jolene Perry

A high school senior dealing with her recently diagnosed diabetes falls for a soldier who’s just lost an arm in Afghanistan. Kirkus dinged it for a lack of conflict, but sometimes that’s exactly what I’m looking for in a romance.

The Impossible Knife of Memory, by Laurie Halse Anderson

The fact that I still haven’t read this one makes me feel like an abject failure. After years of living the trucking life, Hayley and her veteran father have returned to upstate New York. Settling down brings a lot of difficult issues—including her father’s PTSD and her own feelings about having to play the parental role so often—to the surface.

The Killing Woods, by Lucy Christopher

A girl’s father—another veteran suffering from PTSD—comes stumbling out of the woods carrying a dead girl, convinced that, once again, he’s accidentally killed a civilian. But did he really do it, or was Ashlee’s death a result of the mysterious Game that she and her friends play at night in the Darkwood? I admit that it’s the Game more than the murder mystery that has me eager to start reading.

No Man’s Land, by S.T. Underdahl

Sixteen-year-old Dov’s older brother comes back from Afghanistan changed behaviorally and emotionally, but no one other than Dov seems to notice. That the narrator self-identifies as “emo” seems a bit dated to me, but Kirkus gave it a solid review and praised it for being informative without being didactic, which is ALWAYS a plus.

This Is Not Forgiveness, by Celia Rees

Two brothers—one everyman, one war hero—are manipulated and used by a beautiful, strange girl who eventually comes between them; while that’s a compelling noir-ish storyline on its own, it’s the relationship between the brothers that’s been praised with the most fervor. Kirkus not only starred this one, but named it one of the Best of 2012—as it sounds EXACTLY like my kind of book, I am at a loss as to how I could have missed it until now.

There are so, so many more: did I miss your favorite?