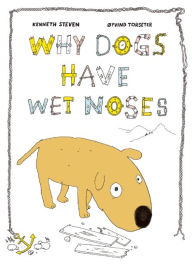 As Groucho Marx once said, “outside of a dog, a book is a man’s best friend.” Today, things are coming up really friendly with this roundup of new picture books about dogs, each one a delight in its own way.

Let’s start with some imports, because picture book imports tend to liven things up a bit. And let’s start with a funny import, Kenneth Steven’s Why Dogs Have Wet Noses, illustrated by Øyvind Torseter and first published in Norway three years ago.

If you gathered up all the picture book adaptations of the biblical story of Noah and his ark, you’d have a pretty tall stack of books. (My favorite is the one featuring Lisbeth Zwerger’s illustrations.) Why Dogs Have Wet Noses, a quirky original pourquoi story, is the funniest of the lot. Here, hipster Noah—with his goatee, comfy hooded sweater, boots, and earring—gathers all sorts of animals, anthropomorphic and otherwise, onto his ark. It’s fun to pore over Torseter’s loose, detailed cartoon drawings with warm pastel shades; readers will want to take their time on the ark spreads, seeing how the animals bide their time. The one dog on board, whose nose is soft and black, saves the day when he sticks his sniffer in a tiny hole discovered in the side of the ark. It’s Noah’s idea, and the dog looks slightly terrified, but since he “loved his master, he stayed completely still, with his nose in the hole.” When everyone makes it to land, Noah “gently stroked his dog’s tummy. ‘Good boy,’ he whispered.” And that is why, to this day, all dogs have wet noses. That’s right: their devotion is such that it can save the very planet. Good dog.

Edward van de Vendel’s The Dog That Nino Didn’t Have, which comes to American readers from Belgium, is less about dogs than it is about the robust inner lives of children and their bustling imaginations, but it’s got not one, but two, dogs for canine-loving readers (not to mention a zebra, giraffe, and rhino—plus some). The dog that Nino doesn’t have is his imaginary one. He plays with it, explor

es with it, and leans on it when he’s sad. Nino’s dad, after all, is in a country far away, but the dog that Nino doesn’t have “liked tears. It loved the taste of salty water.” When Nino is given an actual dog for a pet (“the dog that Nino has now”), he grows to love it, even if this dog “might not know so much about dad and the phone.” No matter: Nino’s imagination is a big one, and to boot there’s suddenly a deer he doesn’t have, a zebra he’s never seen, and a not-hippopotamus. Illustrator Anton Van Hertbruggen’s stark artwork is beguiling. His line is delicate, and the emotion is strong. I’d like to see more picture books with his work here in the States, thanks very much. That would be grand, indeed.

Ditto for the work of Yann Kebbi, who was born in Paris. His Americanine: A Haute Dog in New York, originally published in France in 2012, saw publication here in the States this past summer. This is Kebbi’s first picture book, and his colored penciled illustrations of a dog visiting New York for the first time—and reporting to the reader what he sees—brim with vitality. This is a lively tribute to New York City and its famous landmarks, both reverent and funny, from the point of view of a wide-eyed and curious canine. A copyright page notes states that all the illustrations were created in Paris, though Kebbi once spent some time in New York as a student, and that they were “sparked by emotion and memory.” It’s good stuff, this tall picture book with its vigorous, dynamic lines and inviting colors: It can hardly contain its own energy.

both Ko and Clark live overseas (South Korea and England, respectively). Ko’s story of finding a lost dog wearing shoes is based on a true story: a young girl finds the dog, keeps it for herself, loses it, and then finds it at a shelter. It’s this experience of temporarily misplacing the creature that makes her realizes someone else must be sad to have lost his/her pet in the first place, so she hangs up “found” posters: “FOUND. A Dog Wearing Shoes. Is he yours?” Ko’s pencil illustrations are over-the-top funny in spots—the girl is an exuberant ball of energy—and there are effective splashes of red and yellow throughout the story. There’s a lot to love here, this sweetly goofy story of friendship found and love shared.

And if Love Is My Favorite Thing isn’t the most fitting title for a book about the devotion of domesticated dogs, I don’t know what is. This is the affectionate story, based on Clark’s own dog, of a family who loves their dog, even when she can’t behave herself. The bright red endpapers and sunny illustrations communicate great joy. Plum, whom the family calls Plummie, declares on page one that love is her favorite thing, but her love of mischief, not to mention her abundant curiosity about the outdoor world, get her in trouble. In the end, unconditional love wins, and it goes both ways: the family forgives Plummie for her mistakes, and she agrees to try harder to behave, though she “doesn’t always remember.” Love is messy, after all.

And, speaking of devotion, last but not least is Mary Lyn Ray’s Goodnight, Good Dog

, illustrated by Rebecca Malone and one of this year’s loveliest bedtime books. When the family heads to bed, the family dog stays alert: “He knows the shadows in corners of rooms. He also knows the quiet that comes: moon quiet.” He’s not at all sleepy and spends most of the night recalling the daytime joys with the family he loves. Eventually, he does sleep—dreaming of the sun, no less—and wakes to the child he loves when “a new day is waiting.” This is a quiet, tender tale, perfectly paced, and Malone’s soft acrylic illustrations are reminiscent of the work of Laura Dronzek. A charmer, this one.

Remember the second half of that Groucho Marx quote? “Inside of a dog it’s too dark to read.” So, be sure to have proper lighting…and happy reading.