Dreaming of What's Out There 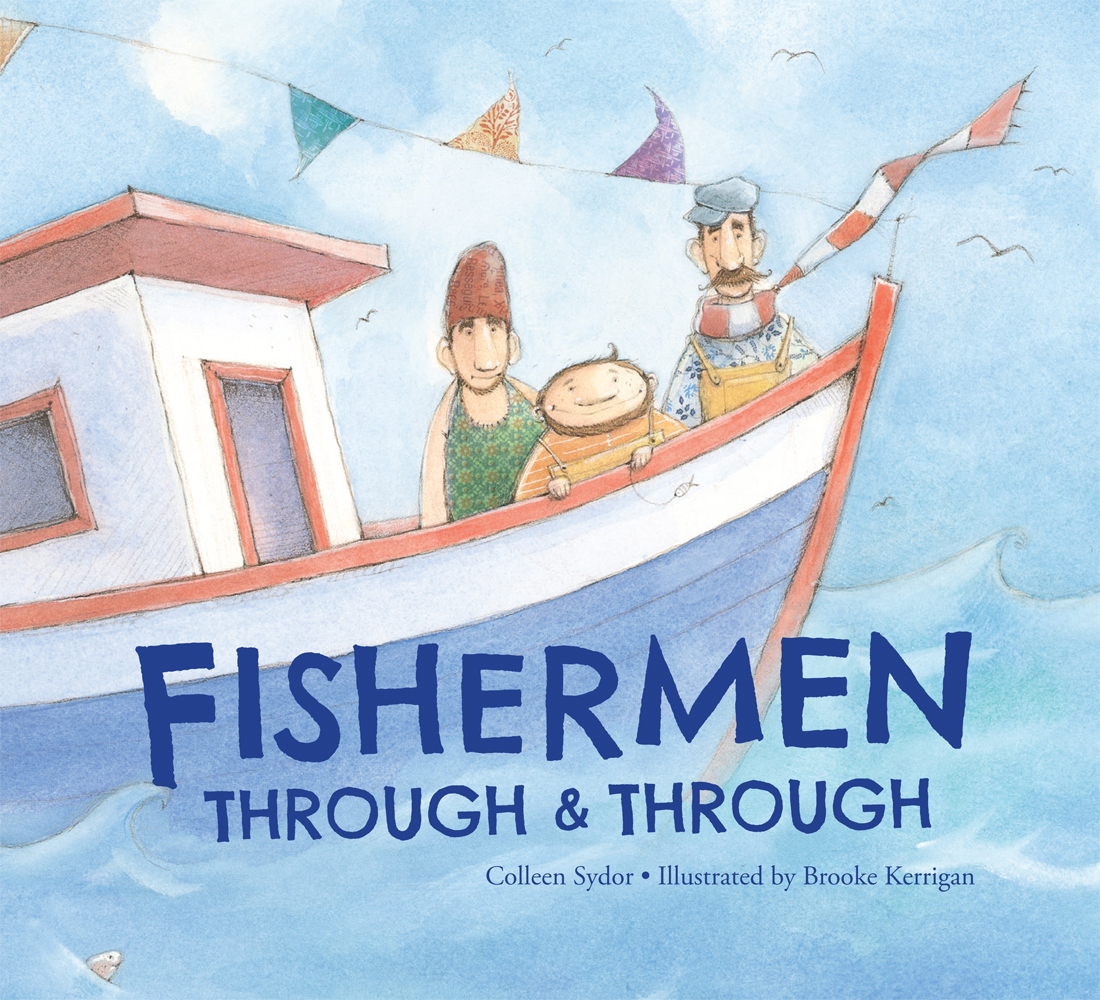 Maybe it’s due to the fact that I just booked a Spring Break trip with my family that I’ve got destinations on the mind. Today, I look at two new picture books that explore the notion of destinations in very different ways.

The first book is a lovely surprise in that it comes from a smaller publisher based in Canada, Red Deer Press. Colleen Sydor’s Fishermen Through & Through, illustrated by Brooke Kerrigan, is the touching, but never maudlin, story of three fishermen—Peter, Santiago, and Ahab—who are reminded why they love their lot in life, their adventurous lives on the sea.

But it’s easy to forget when you sometimes “dream of things other than fish, knotted nets, and saltwater.” Peter, for one, dreams of life in the desert and exploring new lands on the back of a camel. Santiago longs to explore the air; a hot air balloon and life in the clouds would be nice, he figures. And Ahab longs for a fragrant life among the flowers in Holland.

After the three men find and marvel over a “lobster as white as the clouds in Santiago’s daydreams,” they decide to share it with the world. They place the creature in a fish tank at a local restaurant, the Fisherman’s Net, believing they’ve done the right thing. Soon, crowds of gawkers, including reporters and biologists, hound the lobster, and the fishermen are even offered gobs of money if they agree to sell the rare creature.

Both author and illustrator really let the story breathe here, as the three men ponder what to do. Over the course of four perfectly paced spreads, they imagine what life will be like with that much money, but they also find themselves missing the “rolling swell” of the sea, not to mention the seagulls and the “thrum of waves kissing the shore.” As they stare out into the vast sea—in the second spread the illustrator brings us of the backs of the three contemplative men—they decide what to do. Readers aren’t privy to the momentous decision itself, but next we see Joe, the owner of the Fisherman’s Net, who is pleased to find the lobster missing in the morning. Yes, someone had broken into his place of business the night before, but he’s happy the lobster is gone. This is a genuinely moving moment in the story: As Joe stares out the window, he isn’t sure why the stacks of money weren’t taken instead, but he remembers a butterfly from his childhood, one he’d captured in a fish bowl and that had lived only briefly. Finally, on the final spread readers see the three men return the lobster to the water.

Sydor’s writing is a delight, particularly her use of lively metaphors. The fishermen are described as “weathered and salty and tough as the barnacles on the bottom of their boat.” Her phrasing can be lyrical as well. (“[Santigao] longed to sail the sky in a balloon and gaze at his beloved sea with the eyes of a gull.”) And he

r tone is spirited: Peppered throughout the text are a few “blow me down!”s, thrown in for good measure. Kerrigan’s sunny, pastel watercolors are textured and make use of beguiling patterns. Her depiction of Ahab’s “vast sea of wind-tossed flowers” is not to be missed, and she brings a boatload (bad pun intended) of character to each of the three men.

These fishermen may have decided to nix their dreamy destinations, but never fear—because Jon Agee is here. In his newest book, the rhyming story It’s Only Stanley, we meet the Wimbledons and their dog, the titular Stanley, who has a very clear destination in mind. And nothing will get in his way.

The Wimbledons are a family of six. Mr. and Mrs. Wimbledon are trying to sleep, their cat snuggled on the bed, when they keep getting awakened by strange and alarming noises. Each time a noise is made, one of their children comes into the room to report it. And each time Mr. Wimbledon heads out to find the source of the commotion. Stanley is always to blame: He’s behaving mysteriously in the cellar of the Wimbledons’ home—hammering, mixing, wiring, and…well, throw in a little plumbing, and you can let your imagination wander. The dog is hard at work on something.

Eventually, the family throws a giant fit: “We’ll never get to sleep tonight,” they say, “if Stanley doesn’t quit.” Suddenly, there’s a loud boom, and the entire house is launched into the sky. That Stanley. He’s a precocious one and has turned the Wimbledons’ very home into a rocket. There’s a pink Martian poodle on the moon, after all, he was longing to see.

There’s abundant humor here. Agee is always one for some delicious absurdity, for which we picture book fans can thank our lucky stars. His thickly outlined cartoon drawings are as droll as always, and the jokes are understated. Keep a close eye on Max, the family cat. His expressions are a hoot, and since he always follows Mr. Wimbledon into the cellar, he’s the target for dripping oils, water, and electric shocks. It’s funny stuff, and a wild ride in more ways than one.

So take a trip with these two books. Both stories are good for revisiting—again and again.

IT'S ONLY STANLEY. Copyright © 2015 by Jon Agee. Illustration reproduced by permission of the publisher, Dial Books for Young Readers, New York.