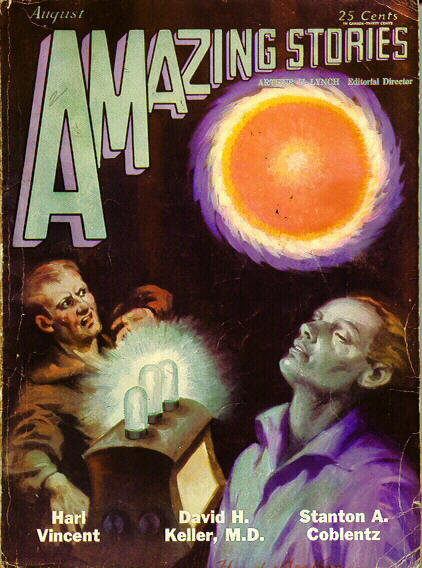 Women have been part of science fiction since its inception, especially as genre magazines began to introduce science fiction to a wider audience in the 1920s. Men and women read, commented on, and wrote for magazines such as Hugo Gernsback’s Amazing Stories. While men largely dominated the magazines, the cheap pages weren’t exclusively printed with stories from men. One early author, Leslie F. Stone, is an excellent example of one of the early female pioneers.

Leslie Francis Stone was born on June 8th, 1905, in Philadelphia, Pennsylvania. There's little known about her early life, but it seems as though she was keenly interested in science fiction early on: when Hugo Gernsback began publishing his science fiction magazine, Amazing Stories, Silverberg picked them up and was relieved to see that she was far from the only woman to be reading the magazine. Writing as Mrs. L. Silverberg (it's likely that Silverberg is her married name), she noted that "For more than a year, I have been a reader of this magazine, and this is the first time I have seen a letter from a woman reader. In fact, I was somewhat surprised as I had believed that I was the only feminine reader of your publication. However, it is with pleasure that I note that another of my sex is interested in scientifiction," as stated in the book The Battle of the Sexes in Science Fiction. While Gernsback might not have printed many letters from female readers before that point, other issues in 1928 show that there were a number of women picking up the magazine regularly, often writing in to praise the stories that they appreciated the most.

At some point, Silverberg was motivated to write her first story, and faced some barriers before even submitting. She indicated that "A friend [with no connection to the field and who therefore confused science fiction with the field of s

cience] advised me that a woman writer...would probably be unacceptable, not only to an editor or two, but to some readers." Nevertheless, she began to submit her stories to Gernsback under the name Leslie F. Stone. Upon learning that she was a woman, "Gernsback accepted [that first story] quite amiably...Nor did T. O'Conor Sloane, dear man, have any qualms about women writers in his stable when he took over the Amazing Stories editorship, never turning down any story I submitted," as quoted in Partners in Wonder: Women and the Birth of Science Fiction. Stone’s submissions came on the heels of Claire Winger Harris, the first woman to publish in dedicated genre magazines with her 1927 story “Fate of Poseidonia” in Amazing Stories. Before long, Gernsback accepted one of Stone’s stories, “Men With Wings,” which appeared in the July 1929 issue of Air Wonder Stories. Later that year, a two-part serial titled “Out of the Void” followed in the August and September issues of Amazing Stories and closed out the year with “Letter of the Twenty-Fourth Century” in the magazine's December issue.

Stone continued to publish in 1930 with a pair of stories, “Through the Veil” (Amazing Stories, May) and “Women with Wings” (Air Wonder Stories, May), followed in 1931 by a sequel serialization to “Out of the Void”; “Across the Void” appeared in the April–June issues of Amazing Stories. Stone's most famous story, “Conquest of Gola,” appeared around the same time in the April issue of Wonder Stories. In it, Stone upends genre conventions by depicting Venus during an invasion from Earth. It's a politically-charged story in which her Gola heroines fend off human men from Detaxal. In the Westleyan Anthology of Science Fiction, the story is described as one that "also addresses another early sf trope, the sex-role reversal story. From the pens of male writers, this trope has tended to result in stories about domineering women who are 'tamed' by brutally irresistible male protagonists. Stone's telepathic women are not so easily seduced."

e Fall of Mercury” (Amazing Stories, December 1935). By 1935, Stone began to slow down: she reported that her story “Cosmic Joke” was inspired in part by her 3-month-old son, and it’s entirely possible that demands from parenthood began to take their toll. She started publishing a single story a year: “The Human Pets of Mars” (Amazing Stories, October 1936); “The Great Ones (Astounding Stories, July 1937)”; “Death Dallies Awhile” (Weird Tales, June 1938); and “Gravity Off!” (Future Fiction, July 1940). In 1967, Avalon Books released Out of the Void as a single novel.

“Gravity Off!” marked the end of Stone's career. She seems to have stopped writing for a couple of reasons, the first being that she simply ran out of ideas: "my own well had run dry," she said, according to Eric Leif Davin in Partners in Wonder. Stone had two sons at this point, and being exhausted by writing is certainly one potential factor. Another seems to be the attitudes of genre magazine editors. In two examples, Stone indicated that John W. Campbell Jr., who had taken the helm of Astounding Stories in 1939, rejected one of her stories, “Death Dallies Awhile,” out of hand, stating that women had no place writing science fiction. Later, Stone appears to have made an attempt to return to genre writing in the 1970s, only to run into similar problems with Galaxy Science Fiction editor H.L. Gold. As Davin points out, however, each editor had track records of publishing female science-fiction authors, and speculated that Stone's style of Planetary Romance simply wasn't compatible with the direction each editor and publication were headed.

ct lines of equality between men and women," as stated in Partners in Wonder. Indeed, Stone's fiction is characterized by leading female characters, most notably in “Conquest of Gola,” “Men With Wings,” and “Out of the Void.” These authors didn't just place women characters in their stories—they brought an entire counterpoint to the genre by adding a new perspective to the larger genre conversation that had, to that point, been entirely dominated by men.

Stone died on March 21st, 1991. Her brief career in science fiction decades before had been part of a much larger picture during the genre's earliest days. Since her stories were published, thousands of women have continued to follow in her footsteps, adding to the larger genre conversation with each word published.