Edward Ellis and the Steam Man of the Prairie 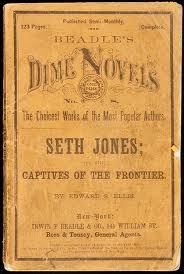 During the 20th century, science fiction as we know it began to take over the pulp magazine industry. The stories were quickly written and cheap, but they were also sensational and took up quite a following. Authors such as Edgar Rice Burroughs and E.E. “Doc” Smith built successful careers spinning out space adventure stories for the magazines. In addition, pulp magazines owe no small amount of debt to another style of publication, the Dime Novel, and to one author in particular, Edward S. Ellis.

While Ellis was teaching, he also began to write, publishing poetry in magazines. He also published his first novel, Dick Flinton; or Life on the Border, in 1859 in the New York Dispatch. In 1860, he mailed in a submission to Irwin P. Beadle & Co.: Seth Jones; or, The Captives of the Frontier. The publisher accepted the novel and promptly published it, eventually printing 500,000 copies. The novel helped Ellis make a career out of writing, and it helped to further establish the Dime Novel as a viable business concept.

From the 1860s, Dime novels were cheaply printed paperback books, started by publishers Irwin P. Beadle & Co, who priced their books at a dime. These books were often sensational novels that were quickly written up and pushed out into the marketplace. Westerns were especially popular, and "The mix of adventure, energy and can-do heroics has an undeniable kinetic fizz about it, although the racism, sadism, casual slaughter and lazy stereotyping of world and premise make many of the stories unpalatable reading today, according to Adam Roberts in his History of Science Fiction.

Roberts cites educational reforms in Britain in the 1870s as one reason for the growth of eager readers in that country: "The creation of a mass literary culture was tied to a number of social and cultural changes we can date from the end of the nineteenth century. In Britain, for instance, the Education Act of 1870 enormously increased levels of literacy and created a market for a rapidly expanding number of popular newspaper, magazine and book titles." Similarly, educational reforms in the United States helped to boost literacy rates, and in turn, boost demand for novels. In his history, Trillion Year Spree: The History of Science Fiction, Brian Aldiss similarly points to urbanization as an element in the demand for fiction: "The inhabitants of the congested cities of Europe and America found themselves increasingly in need of distraction. Not only religion but fiction also became the opiate of the people."

Ellis, writing his adventure stories at the very start of this movement, benefitted greatly from this growth. He continued to write for the firm for a number of years afterward, all while teaching in New Jersey. Over the course of his lifetime, he wrote several hundred Dime Store novels. The exact number will likely never be known, due to the sheer number of books written as well as the number of pen names he employed.

In 1868, Ellis dipped his pen into science fiction for a novel called The Steam Man of the Prairies, about the adventures Johnny Brainerd, a teenage inventor who created a massive steam-powered man, taking its creator on a number of adventures around the American Midwest. Writing for the Encyclopedia of Science Fiction, John Clute notes that the book is an early example of a style of science fiction which he termed “edisonade,” described as “any story dating from the late nineteenth century onward and featuring a young US male inventor hero who ingeniously extricates himself from tight spots and who, by so doing, saves himself from defeat and corruption, and his friends and nation from foreign oppressors.”

The Louisiana Purchase had just about doubled the size of

the country over a half a century earlier, and further expansion to the West Coast was ongoing. At the same time, the country was experiencing a massive boom in technological and infrastructure advances to support the growing country. Ellis, in writing about adventures on the American frontier, was exploring the lives of people living on the edge of the unknown, much like modern stories set far out in the solar system or in deep space. Other technological advancements in transportation, such as hot-air balloon and rail travel, helped to open up access to parts of the world previously impossible to reach, such as the Arctic and the depths of Africa, Asia, and South America. (With significant drawbacks to the locals.)

While antiquated now, it bears remembering that this environment was a massive change for the world’s inhabitants—for both the natives who were being pushed out of the way, and the new settlers eager to take over their land. Ellis' works serve as a good window into the attitudes of the time, and provide some context for how the future was viewed, as well as how much the world was changing.

Ellis' novels involved concepts that were readily available to copy by any other Dime novel author. Harold Cohen published his own version of The Steam Man in 1876, titled Frank Reade and his Steam Man of the Plains, which was eventually expanded into a longer, popular series of books. Despite that setback, Ellis continued to write up to the point of his death in 1916, creating many more stories of technical advances, particularly flying machines. John Clute of the Encyclopedia of Science Fiction notes that Land of Mystery, published in 1889, Monarch of the Air, published in 1907, Flying Boys in the Sky and Flying Boys to the Rescue, both published in 1911, and The Dragon of the Skies, published in 1915, are notable entries in his body of work.

The Dime Novels that Ellis helped to pioneer were futuristic in some ways—they were cheap and readily available for a growing class of readers, while a growing economy of scale allowed for demand to be met. Furthermore, they were early predecessors to popular literary magazines such as Argosy and Street & Smith, which published their own speculative stories and were in turn direct predecessors to the celebrated science-fiction pulp magazines.