Embrace Your Fears With These Scary New Horror Books 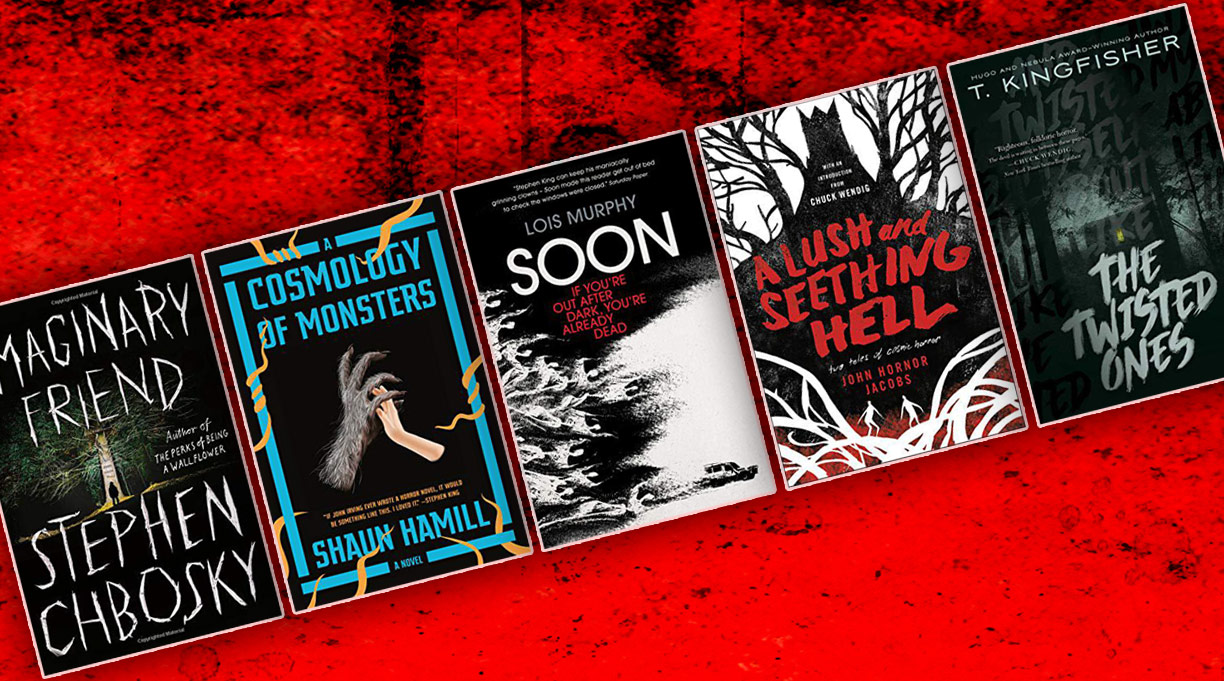 When I was younger, I used to look forward to Halloween because it meant lots of candy. Now that I’m older and wiser, I spend less time taking candy from strangers and more time reading, with Halloween serving as my reminder to consume some scary stories. Reading horror fiction generates a satisfying cycle of relief and catharsis. Even though you can find it everywhere, let me save you a little legwork. Seek out any of the following books to get your horror fix:

A Cosmology of Monsters  by Shaun Hamill (Pantheon, Sept. 17). If you took a mainstream novel about a rural Texas family and locked it in a coffin with unspeakable evil, you’d end with something like A Cosmology of Monsters. In it, Noah Turner narrates the story of his family and their decades-long struggle with supernatural forces in a small Texas town. Noah’s father saw monsters, and that’s why he built The Wandering Dark, an immersive haunted house experience like no other. Those monsters are why some of the townspeople go missing. And though the entire Turner family sees monsters, too, only Noah invites them into his life. Hamill’s coming-of-age story is not just about the monsters we can’t see, but the ones we can.

Imaginary Friend by Stephen Chbosky (Grand Central, Oct. 1). In this gothic thriller, a woman named Kate and her young son, Christopher, flee to a small town in Pennsylvania in the dead of the night to escape Kate’s abusive relationship. Mill Grove is far enough away to escape the relationship but not danger—because soon after their arrival, Christopher disappears. Although he is found after several days, he is changed. For one thing, although dyslexic, Christopher is suddenly excelling at his schoolwork. He also hears a voice that nobody else can hear. Christopher doesn't know it yet, but his “imaginary friend” is part of a supernatural war playing out in an imaginary world that threatens to intrude on the real one.

The Twisted Ones by T. Kingfisher (Saga Press, Oct. 1). A woman known as Mouse is asked by her father to clear out her deceased grandmother’s home in rural North Carolina. Mouse discovers that grandma was a hoarder and among the belongings is a mysterious journal written by Mouse’s stepgrandfather. The journal seems at first to be filled with nonsensical rants about “the twisted ones.” But then, while walking her dog in the woods around the house, Mouse discovers a deer effigy, just like one described in the journal. After her dog goes missing, Mouse goes looking for him and comes face-to-face with a series of incredible horrors.

Black Ambrosia by Elizabeth Engstrom (Valancourt, Oct. 1). Valancourt has been dutifully reprinting classic horror from the 1970s and ’80s as part of their Paperbacks From Hell series, a project inspired by the wonderful book of the same name by Grady Hendrix. The first book of their second wave of classic horror is Engstrom’s 1988 vampire novel, Black Ambrosia. Angelina is the kind of vampire who adheres to the traditional tropes, such as draining the blood from her victims and sleeping in a coffin. She roams the American countryside trying to keep a low profile—not because of any heart-of-gold aspirations but because Angelina’s being hunted by an ex-lover who wants to kill her.

A Lush and Seething Hell by John Hornor Jacobs (Harper Voyager, Oct. 8). A Lush and Seething Hell is actually two short cosmic horror novels in one volume. “The Sea Dreams It Is the Sky” involves two expatriates—a writing instructor named Isabel and an exiled poet named Rafael -- of a fictional South American country called Magera: a writing instructor named Isabel and an exiled poet named Rafael. Isabel’s quest to find the missing poet initiates her personal transformation, mimicking Rafael’s. But it’s Rafael’s backstory that serves as the Lovecraftian foundation of the story, evoking a subtly unsettling feeling that sneaks up on you. In the short novel “My Heart Struck Sorrow,” a librarian named Cromwell discovers in the Library of Congress a strange audio recording from the Deep South which may be the musical stylings of the Devil himself. Both stories are a rich blend of psychological horror and supernatural suspense.

Soon by Lois Murphy (Titan Books, Oct. 15). Something strange is happening in the small Australian town of Nebulah. On winter solstice, the birds disappeared and the mist arrived. Ever since, people who left their homes after dark disappeared. Now, nine months later, only six residents remain, gathering every night in the same room for protection. Pete, a former police officer, tries to keep cabin fever from destroying them all. One day, he rescues a visiting psychic from a horrible fate. She gives Pete a dire warning: He must leave town before the next winter solstice or he will be dead, too.

Slash by Hunter Shea (Flame Tree Press, Oct. 24). Ashley King was the sole survivor of the infamous “Resort Massacre” in the Catskills Mountains. Unfortunately, five years later, she’s found by her fiance, Todd Matthews, hanging in the basement. Ashley left behind clues about what really went on the horrific night of the massacre—clues that could lead to the apprehension of the killer known as The Wraith. After enlisting the help of his friends, Todd goes back to the crumbling Hayden Resort looking for answers. What they find is a haunted history and an evil that’s been lying in wait the whole time. The Wraith is not finished yet.

The House of Night and Chain by David Annandale (Games Workshop, Oct. 29). Black Library’s Warhammer Horror line of stories, of which this is part, seeks to extend the futuristic setting of their Warhammer 40,000 novels and their Warhammer fantasy novels into the realm of horror. To be fair, those worlds already had some elements of horror in them, but now they are brought to the foreground. The House of Night and Chain takes place on another planet, in a city called Valgaast. There, Col. Maeson Strock, retired from the mighty military forces of the Empire of Man, returns to his ancestral home, the notorious House of Malveil, to assume the role of planetary governor. Strock hopes to eliminate political corruption and reconnect with his estranged family, but the evil history of the House of Malveil will not be ignored.

Recent months have been a treasure trove for readers of short horror fiction. Here’s what you may have missed but shouldn’t: