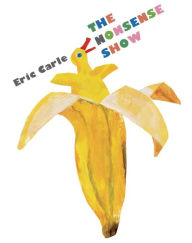 When we talk about absurdist children’s literature, we can acknowledge that absurdism is a relatively easy thing to pull off for young audiences. As Nicholas Day noted in this 2012 Slate piece, children’s lives are full of stories that are nonsensical. “The picture book genre has always been a breeding ground for anarchic absurdism,” he wrote. “An absurd picture book is, in a way, no more of a challenge than the narrative demands of daily life.” This is evident when you look back to 2010 and Lisa Von Drasek wrote about picture books that channel the absurd, “the incongruous, the nonsensical, the flat-out eccentric.” She included the likes of Philip Stead’s Caldecott-winning A Sick Day for Amos McGee, illustrated by Erin Stead. Wait, I thought to myself. There’s nothing absurd about that story. It’s sweet and perfectly logical. But, instead, Von Drasek writes, it “delightfully takes its loony scenario for granted.” Yes, the zoo animals hop on a bus and visit their beloved zookeeper, home sick. There’s a whole lot of bizarre there—a rhino in a red scarf, an owl who is afraid of the dark—even though we’re so accustomed to picture book stories with nonsensical elements, we don’t think twice about it.

All that said, Eric Carle ups the ante in his newest picture book, The Nonsense Show. It’s a book that waves its absurdist freak flag—and proudly. You can tell this from the cover, which shows a fluffy duck popping out of a freshly peeled banana. And the book’s very title lays it out, and without stuttering, for children to see. Carle even notes on the book’s title page spread that he, in part, dedicates the book to legendary artist René Magritte, who, he explains to child readers, “famously painted a realistic pipe and wrote underneath ‘Ceci n’est pas une pipe.’ (This is not a pipe.)”

A rabbit magician in a tuxedo pulls a tiny human from a top hat on the book’s first spread, welcoming children to “The Nonsense Show!” This is followed by a series of delightfully illogical events and creatures: a bird in a fish tank and a fish in a bird cage; two snakes joined together by their tails (which will take care of my nightmares for the next decade or so); a tennis ace who swings her racquet at an apple, instead of a ball; a horse and a human who have traded heads; a man whose legs, unattached to the rest of his body, run ahead of his torso; a leopard whose markings change from spots to stripes mid-body; and much more.

This isn’t only highly entertaining absurdism for children; it also inherently celebrates mischief, and I always like to see picture books that do that. Mr. Up and Mrs. Down, who appear on one of the final spreads, break all the rules (the very rules of gravity, for one), and Mr. Up even eats his cake from the ceiling. Cue children’s squeals of delight here. O! To eat from the ceiling and break all rules of table etiquette! On another spread, a tiny boxer knocks out a mammoth one, and in yet another, a child nestles comfortably in the pouch of a kangaroo. Absurdism embraces this type of upside-down-ness and the thumbing of one’s nose at all the rules. For children, constantly at the mercy of the laws of the adult world, this is a real pleasure. Anarchic absurdism, as Day put it. Indeed.

And Carle’s art is as visually engaging as ever, these moments rendered via painted tissue-paper collage. The endpapers are a particular treat: They feature what look like quick drawings in crayon (black outlines only) of what we see on many spreads.

On the very final spread, the boy who was initially pulled out of the hat at the book’s opening is now regular-sized and escorts the rabbit magician out of the book. In a speech bubble, he shares a string of adjectives and nouns for absurd andall things bizarre: “humbug,” “balderdash,” “gobbledegook,” “surreal,” and more.

No matter what you call it, it’s great fun and grand entertainment for the young at heart—of all ages.

THE NONSENSE SHOW. Copyright © 2015 by Eric Carle. Illustration reproduced by permission of the publisher, Philomel Books, an imprint of Penguin Group, New York.