Exploring the History of Superheroes 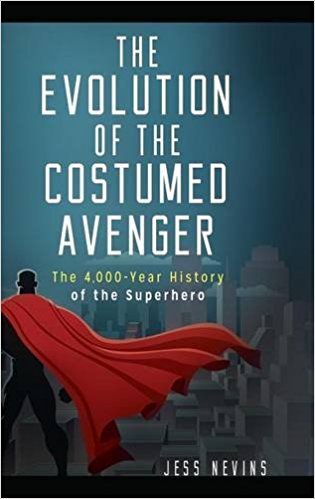 You can't escape them. They're everywhere. Superheroes have infiltrated every aspect of popular culture. You'll find them in blockbuster films, several currently-running television shows, countless books, and of course comics…but you'll also find them plastered on numerous T-shirts and hats, on coworkers' desks as vinyl figures, mentioned in news segments about conventions, and even in the form of jewelry and gadgets.

This is not a slow invasion. Superheroes were around long before they pervaded pop culture. In fact, the lineage of the modern superhero can be traced back as far as four millennia ago. That's exactly what Jess Nevins talks about in his new book The Evolution of the Costumed Avenger: The 4,000-Year History of the Superhero, a well-researched and utterly captivating book offering the complete history of the superhero and how the concept has evolved over time.

The Problem with Defining Superheroes

Nevins' first challenge, like any reference book attempting to study a thing, is to define his terms. Rather than start from scratch defining term "superhero", he looks at classic definitions by other scholars. These definitions, mostly as applied to myths and legend, are partially dismissed as insufficient for the purposes of discussion of modern day superheroes. However, they are still identified as useful starting points. So how do you define the modern-day superhero?

If you've ever tried to accurately define a literary genre, you'll immediately encounter the problem with such definitions. Almost every definition you can possibly conceive has exceptions that break the rule. Nevins quickly avoids this discussion pitfall by noting that a binary is/is-not definition is useless. Better is to define a set of characteristics that embody the idea of the superhero, and then apply those traits as a litmus test to see how well a character stacks up against them. In this way, superheroes can be said to occupy a literary range of stories. Where they fall within that range depends on how many of the criteria are met. The more traits an individual has, the more he or she can be considered a superhero.

Things That Make up a Superhero

Nevins identifies a handful of characteristics that make up a superhero. A true superhero need not exhibit all of them. Indeed, none of them do. (Sorry, Superman!) However, the more traits they have, the more superhero points they get. Traits include, but are not limited to:

This is not an exhaustive list. Nevins' book has more of them and even that list is admittedly non-exhaustive. The fun part is in identifying how your favorite heroes match up to these traits. Batman, for example, lacks superpowers, but more than makes up for it in his detective skills, fighting and – another trait! – extraordinary technology.

Introducing the 2 Kinds of Protosuperheroes

In tracing the history and evolution of superheroes, it is helpful to separate what we think of as modern day superheroes from what came before. In The Evolution of the Costumed Avenger, "everything that came before" begins with The Epic of Gilgamesh and ends just before the appearance of Superman in Action Comics #1 in 1938. Nevins refers to the superheroes that came before our modern-day version as "protosuperheroes".

For purposes of classification, there are two types of protosuperheroes:

All protosuperhero characters fall into one of those two categories. Many of the myths, legends, and stories that you know (like Robin Hood and Arthurian legend, for example) are considered protosuperheroes. No detail is left out as Nevins traces the timeline of these early day superheroes.

The Rise of Modern Superheroes

In discussing superheroes, I've glossed over many aspects of superhero evolution. Above, I mentioned Superman and Batman, the most recognizable superheroes, but there are hundreds of other superheroes that Nevins explores in-depth and with remarkable insight.  The thrill of reading a book like The Evolution of the Costumed Avenger is that, aside from being educational and interesting in itself, it inspires readers to seek out more superhero stories.