Finding Glories with Cozbi A. Cabrera 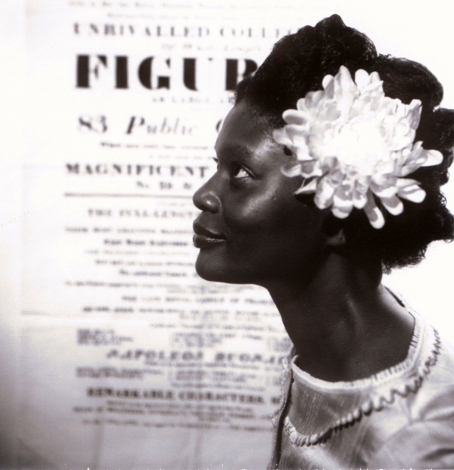 “Hair’s a big deal in many cultures,” author-illustrator Cozbi A. Cabrera tells me via email. “I once had a co-worker share with me that she wanted nothing more than to live with her grandmother in the South. She wanted to be where she was to the point of yearning. Her mother said, ‘as soon as you’re able to take care of your own hair, you can go live with Nana.’ Well, Nana died before that could happen, and the correlation between hair care and life with Nana weighed heavily with her still.”

Cabrera ’s newest picture book, My Hair Is a Garden, is all about hair — and it is, as Cabrera puts it, a big deal for MacKenzie, the book’s protagonist. She is teased at school for having “messy” hair and, after the bell rings, runs to her neighbor’s house. Miss Tillie is special to the girl, and her home has always been her refuge. MacKenzie tells Miss Tillie about her troubling day and, when Miss Tillie touches her head, the girl thinks to herself in the form of an impromptu song: “Miss Tillie’s hair is shiny. / Miss Tillie’s hair is long. / She wears it as a crown / Like beauty wrapped in song.”

MacKenzie knows she’s in good hands when Miss Tillie begins to teach her how to care for her hair — how to shampoo, comb, and generally nurture it. The book even closes with tips for caring for black hair, as well as recipes for herbal infusion rinse and moisturizing shea butter.

When Miss Tillie takes the girl to her backyard, “a paradise with so many shades of green, bright pockets of colorful flowers and cool shade,” she tells MacKenzie about the efforts put into caring for her garden, asking her: “Is that Japanese maple prettier than those succulents?” MacKenzie knows each one is beautiful in its own way. “That was the day,” Cabrera writes, “I first learned that my hair is a garden.” As the Kirkus review notes, this is a book about more than just hair care. It’s a book about a black girl learning to appreciate herself.

“I’ve had numerous women stop me in the street to ask how I care for my natural hair and what products I use,” Cabrera tells me, “and I’m always happy to share. When I was dating my husband, he found it unusual and amusing. I’m also asked this by women with biracial or adopted children, [women who] don’t come from a tradition of ‘extremely curly hair-handling’ and are baffled by what to do.”

And, yes, Cabrera is a gardener herself. “I’ve treated every garden I’ve tended as not a flat, expansive planting plot, but as a sanctuary with multiple spaces,” she says. “No matter how thoughtful your design, the garden teaches you. It’s the best teacher ever. You just have to tune in and stick around.”

This is the first picture book Cabrera has both illustrated and written, and she gives MacKenzie a distinctive voice. The girl describes Miss Tillie’s house, as well as her hair, as having “a glory.” Though this is the first time her writing has been published, Cabrera refers to herself as a long-time secret writer. “You can write for a long time,” she tells me, “and tuck it all away with only your significant other in the know, because there are bins upon bins of paper that travel with you on every major move, that sit in the dark basement, that don’t pay rent in storage.” Cabrera submitted some manuscripts to an editor at a larger publishing house about a decade ago and assumed they were inadequate when she received no response. Fast forward to now, she says, and “that same editor shared some of my illustrated work with the folks at Albert Whitman and mentioned I had a story about hair. She essentially found a home for My Hair Is a Garden. That’s grace in a nutshell.”

Though Cabrera previously painted her picture book illustrations in oils, she’s now a true believer in acrylics. “I love the richness in color you find in oil pigments,” she tells me, “but imagine trying to make delivery when the paint isn’t dry? Stinky Krylon Matte Finish, where art thou? So, I moved to acrylics. I use a wet palette, but the paint often dries too quickly, so it’s a dance. I still prep my boards or whatever I’m using with gesso, unless I want the white of the paper showing through to lighten the balance of the book as a whole.”

When she’s not busy illustrating picture books, Cabrera is hand-crafting dolls and clothing. This is work, she tells me, that informs her illustration work, as it is all about “play, construction, design and clothing the figure,” which allows her to express a love of detail. Once, she explains, someone gifted her with an entire lace collection previously belonging to a seamstress in 1930s’ Vienna, “bits she saved for her sewing and harvested from garments, wound carefully onto now-brittle cardboard. She made a study of detail and, through much upheaval, sought to preserve this evidence of care and beauty. That’s what I respectfully bring into the work with the dolls. I can’t help but pay attention to textile design and bring that in to each character’s presentation.” Anyone familiar with Cabrera’s previous picture books has seen this in action. For instance, Patricia C. McKissack’s Stitchin’ and Pullin’: A Gees Bend Quilt, which Cabrera illustrated in 2008, was created using textiles, representation of textiles, and quilted squares. “It’s the difference,” Cabrera explains, “between a quilter illustrating a quilt versus someone who hasn’t been paying attention up until now.”

With MacKenzie’s and Miss Tillie’s story on the page and in the world, Cabrera now considers what she calls “the boldness to pry some of the many stories out of the drawer and give them a place with young readers.” Something tells me, no matter the stories, Cabrera will lovingly tend to them, as a gardener to her seedlings.

MY HAIR IS A GARDEN. Text and pictures copyright © 2018 by Cozbi A. Cabrera. Illustration reproduced by permission of the publisher, Albert Whitman & Company, Chicago.