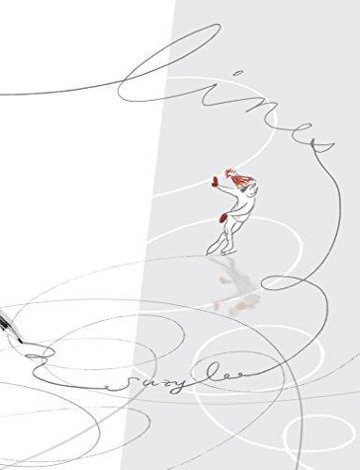 The use of line in picture books directs the viewer’s eye across the page, but it also can convey great meaning—just as color, shape, and texture can. Angular lines convey excitement and tension; curved lines express more organic, peaceful qualities. Diagonal lines can communicate spontaneity, and horizontal lines, tranquility. A large part of so-called visual literacy with children is their ability to “read” these elements of art in picture books. It’s a sophisticated thing, and children are very good at it.

Two new wordless picture books play creatively with lines to tell a story. Suzy Lee’s Lines, ultimately a story about the creative imagination, was released last week, and Kathryn Otoshi’s Draw the Line will be on shelves in mid-October.

The opening and closing endpapers of Lee’s book say it all: The first set of endpapers shows a blank piece of paper, a pencil, and an eraser. The closing endpapers, as we’re just about to close the book, show us that whomever the pencil belonged to found a way to express herself artistically; we see a drawing on that paper, one of a frozen pond in winter.

Despite the fact that those opening endpapers indicate there’s an unseen artist at work, it slipped my mind altogether when I saw the opening spread, which shows a girl in a red knit hat and red mittens skating on the ice. For nearly nine full spreads, she gracefully glides across a pond, her ice skates scratching fluid and assured lines into the ice, even when she’s spinning and twisting. When, suddenly, she falls on the ice, we see the edge of a paper to the right and are reminded that there’s an artist at work, drawing at her desk and, god-like, determining what will happen to the girl. Clearly, the artist followed her muse with grace for a while, yet something happened to trip her up. The next spread shows a crumpled piece of paper and a trail of rubber eraser shavings.

But the next spread shows the paper, now wrinkly, flattened and back on the desk. Perhaps it’s all in an effort, on the part of the artist, to not relinquish herself to the fear of messing up. Now, on the paper, we see the girl again, but we also see another child in ice skates. On the next spread, we see even more children. They are all on their bottoms. Have they all fallen? Either way, they’re making the most of it. They all start spinning on the ice, even making ice angels. In the end, they’re all on their feet again, making more lines with their ice skates. They’ve joined together as one, having found joy in play. Perhaps the unseen artist has found her own joy in her artistic expression, no longer afraid to make a mistake.

Needless to say, the art, rendered in pencil, communicates much with line. Lee’s spacious, uncluttered spreads are expertly rendered. This is a book with a lot of breathing room, and it’s a lovely thing to see on shelves filled with such busy picture books.

Otoshi’s Draw the Line is also spare, communicating abundant meaning with line, color, and body language. We see two young boys drawing on the ground with

what appear to be pencils. They back right into each other, as they are each in their own worlds, drawing intently. Here, in all their alarm, the warm, yellow glow over their heads turns briefly to a dark purple. Like Lee’s book, this one is wordless, but the boys communicate via gestures. It’s all good, the blonde boy appears to be saying to the other one.

When they are, magically, able to pick up the lines they’ve just drawn, plays ensues. But when one boy lassoes and yanks the other, the purple appears again – as well as angry eyebrows and tense, jerky movements. They each yank so hard on their end of the line that a literal rift forms between them. This happens right in the book’s gutter, Otoshi playing creatively with its very presence.

The rift grows, looking a lot like the aftermath of an earthquake. Separating the boys in dramatic ways, they are at a loss. Until, that is, one of the boys runs his finger across the rift, forming lines that make it look like only water separates them. Both boys, having come to a place of forgiveness, draw over it, thereby making it disappear (and making themselves dirty in the process, as if it’s charcoal they’re touching).

This story, amongst other things, captures well the whims and occasional unpredictability of childhood friendships and communicates a lot with little. It’s a book whose “reach,” as the Kirkus review notes, “grows with each rereading.”

And that’s the bottom line.