Fit to Thrill: Alistair MacLean Deserves to Be Read Again 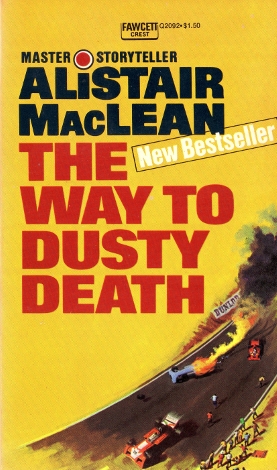 At the height of his renown, back in the late 1960s and early ’70s, Scottish adventure-thriller writer Alistair MacLean rivaled even Agatha Christie as a best-seller. I’ve seen it reported that by 1978, 21 million paperback copies of his books had been published, and by 1983, at least 16 of his works had sold upward of a million copies apiece. The scribblers of promotional blurbs were shameless in linking MacLean’s name to new fiction by other, lesser writers, and Hollywood couldn’t seem to capitalize fast enough on his popularity; more than a dozen motion pictures were adapted from MacLean’s yarns, including The Guns of Navarone (featuring Gregory Peck), Ice Station Zebra (with Rock Hudson), Where Eagles Dare (with Richard Burton and Clint Eastwood) and Breakheart Pass (starring Charles Bronson).

Not bad for a guy whose debut novel was excoriated as “drivelling melodrama” by one of Scotland’s top-selling newspapers, the Daily Record.

It’s interesting to note how many modern-day crime and thriller authors—among them Lee Child, Matthew Dunn (Spycatcher), Tom Cain (The Accident Man) and Dennis Lehane (Live By Night)—trace their fascination with this genre back partly to MacLean’s storytelling. “Alistair MacLean would always set up his books with a basic foundation in which not a single thing you learned would turn out, in the end, to be true,” Lehane once recalled for an interviewer. “After you read a few of his books, you’d start to look for the twists, but you could rarely see them coming.”

Another thing most people probably didn’t see coming was that, not long after he went to his grave in 1987 at age 64, MacLean’s reputation entered a precipitous decline. It was as if, without the author himself abroad in the world, the public suddenly snapped out of its trancelike enthrallment with his suspenseful, deceptive plots and cynical protagonists. Although it was estimated, in 2006, that more than 150 million copies of MacLean’s books had been bought worldwide, it’s not uncommon these days to receive blank stares from younger readers when his name is brought up.

Which is a lamentable thing, since MacLean’s tales—though they were far from perfect (especially his later efforts)—do not deserve to be forgotten.

Alistair Stuart MacLean (pronounced ma-CLAIN) was born in Glasgow in April 1922, one of three sons given to a Church of Scotland minister and a singer. He grew up speaking Gaelic at home, and after attending high school he enlisted in the Royal Navy in 1941. He served during World War II as a torpedo operator on board the HMS Royalist, a ship that escorted supply convoys bound for the USSR, but he also saw action in the Mediterranean and Aegean seas, as well as in the Far East.

Following his release from the Navy in 1946, MacLean studied English at the University of Glasgow, and in his spare time he swept streets and did light post office labors to support himself. He went on to teach at an all-boys secondary school. But in 1954, MacLean entered and won a newspaper-sponsored short-fiction competition with “Dileas,” his dramatic account of a maritime rescue. That achievement drew the attention of a publishing company, which invited him to pen a novel. The result: HMS Ulysses (1955), a chilling, realistic story that drew on his military experiences and was compared favorably by reviewers (at least those who didn’t receive their paychecks from the Daily Record) with Herman Wouk’s The Caine Mutiny (1952). Astoundingly, a quarter-million copies of MacLean’s book were purchased within the first six months of its publication.

With that triumph tucked firmly beneath his belt, MacLean quickly produced a still bigger blockbuster: The Guns of Navarone (1957), about a campaign by British saboteurs, during World War II, to silence the armaments at an ostensibly invincible German installation on the southern Aegean. Navarone turned out to be my introduction to MacLean’s fiction. It was assigned reading for one of my high-school English classes, and was without question the most exhilarating work we tackled that year, the others being safe “classics” by Sinclair Lewis, Nathaniel Hawthorne and others. Having enjoyed one MacLean adventure, I was determined to sample more. Fortunately, there was a wealth of choices to be had.

“I’m not a born writer, and I don’t enjoy writing,” MacLean insisted on occasion. Yet for most of his career, he delivered at least a novel a year to bookshops. His narratives were set all over the globe, from communist Hungary and the Gulf of Mexico to Singapore, the south of France, San Francisco, The Netherlands and the Arctic Ocean. MacLean’s male protagonists were typically cool, morally resolute and prodigiously skilled, often harboring secret knowledge crucial to the plot’s resolution. The odds against them were predictably astronomical, and their physical and mental stamina might be sorely tested; but no matter the cruelty of their foes (Nazis, drug dealers, foreign agents, gun runners, etc.), MacLean’s heroes eventually prevailed. His female characters didn’t often enjoy such complexities of character. While they might display a flash of steel in their spines and barbs on their tongues, they were usually sexier than they were self-reliant—though not alluring enough to distract the leading men from their duties; unlike many of his contemporaries, MacLean believed that fictional love-making and romance were needless fetters on a story’s pace.

Every MacLean fan has his or her own favorites from among the author’s 28 novels. The Guns of Navarone and Ice Station Zebra (1963), a Cold War espionage tale about a nuclear submarine sent to rescue the survivors of a fire at an Arctic meteorological station, generally win high marks. But so do 1967’s Where Eagles Dare (focusing on a World War II–era suicide mission to a Bavarian castle, where a captured general with knowledge of the upcoming D-Day invasion is being held); 1971’s Bear Island (having to do with killings among the film crew on a desolate Arctic island); 1961’s Fear Is the Key (about a supposedly murderous criminal who’s dispatched to an oil rig from which a treasure-laden plane is being salvaged); and 1959’s The Secret Ways, aka The Last Frontier. This final book pits a British operative against secret police as he struggles to liberate a nuclear scientist trapped in Eastern Europe.

To make this into a top 10 list, I’d add Puppet on a Chain (1969), which finds an Interpol agent and his two lovely but predominately useless assistants trying to put a stop to Amsterdam drug-traffickers; The Way to Dusty Death (1973), about a champion race car driver whose evident slide into alcoholism conceals a deeper, darker game; and Breakheart Pass (1974), an Old West–set yarn about violence and twisted plots aboard a Union Pacific train steaming across northern Nevada in the midst of a daunting snowstorm.

MacLean composed most of his best novels before 1970. Even earlier, after penning Ice Station Zebra, he’d thought to retire. He left his home in Switzerland, to which he’d moved many years before to escape British taxes, and purchased the Jamaica Inn (made famous by Daphne du Maurier’s 1936 novel of that same name) in Cornwall, England. However, he couldn’t make a go of it as a hotelier and so returned to writing. Some of the books completed between the mid-1970s and mid-’80s were of considerably less quality than their predecessors, including The Golden Gate (1976), in which a U.S. president and two Arab leaders are taken hostage on San Francisco’s best-loved bridge, and Santorini (1986), about an atom-bomb-carrying plane that crashes into a volcanic corner of the Aegean Sea. It’s best to stick with the earlier ones, those in which the author’s self-deprecating wit still sparkled and his plots still seemed inventive. MacLean himself was not blind to his declining talents. “I’m the world’s greatest living writer,” he is supposed to have groused once in a drunken state, “but I write rubbish.”

As time went on, and tastes changed, Alistair MacLean’s flawless champions fell out of style and readers wearied of the verbal jousting he often contrived between his protagonists and pretty women (occasionally in the midst of the most dire circumstances!). Some of his stories now seem a bit dated and unbelievable, and other authors such as Clive Cussler and Wilbur Smith have stepped in to make the adventure-thriller genre their own. Yet, MacLean excelled at tales in which men were driven to extremes and twists repeatedly blindsided you. His books may not have been literary masterpieces, but the best of them—those in which he wrote about subjects and environments he knew well—were far from rubbish.

J. Kingston Pierce is both the editor of The Rap Sheet and the senior editor of January Magazine. You can link here to previous entries in his “rediscovered reads” series.