Following Your Heart Despite the Consequences 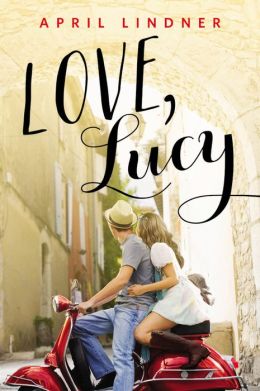 Love, Lucy is April Lindner’s third contemporary spin on a classic novel—Jane modernized Jane Eyre, Catherine reimagined Wuthering Heights, and Love, Lucy is a retelling of E. M. Forster’s A Room with a View—and while it is set in the same universe as the other two, it’s the one that diverges the furthest from its source material. Rock star Rochester and all, Jane was a quite faithful adaptation; Catherine went to some extremely different places, plot-wise, but shared many of the same themes and imagery as the original; Love, Lucy and A Room with a View share many elements on the surface, but contain entirely different hearts.

A Room with a View is about class differences and gender dynamics and a woman who wants to be an equal partner in her marriage—not looked at with fond condescension, but appreciated for her heart and her mind and her soul. Love, Lucy is about a girl who wants to follow her dreams without losing her father’s approval—and with his approval, financial security. Both girls have life-changing, eye-opening trips to Italy; both girls travel with outwardly irritating, seemingly heartless female companions; both girls are romantically pursued by two entirely different young men. Both stories are about a girl who ultimately chooses to follow her heart regardless of the social and familial consequences, and both meditate on truth and beauty.

Details of plot and era aside—and setting aside the fact that Lindner’s book hardly deals with social class at all, which is a huge divergence—the change in storyline that makes the two books feel so very different is the second romance. In A Room with a View, it is the behavior of Lucy’s fiance, Cecil, that finally helps her find a way to put her discontent into words; in Love, Lucy, Lucy’s college boyfriend, Shane, is inoffensive and passionless, a 2015 version of Royal Gardner. Cecil is a complete toolbox of a person, but he’s not stupid, and when it comes down to it, he’s not unfeeling or incapable of change; Shane is two-dimensional, full stop. To put it bluntly—and as one book is based on the other, I don’t think it’s unfair to compare the two—Cecil is to Shane as A Room with a View is to Love, Lucy.

As a story, independent of its source material, Love, Lucy is an enjoyable-if-forgettable coming-of-age love story—aside from some minor issues, it’s a solid romance, and I have no doubt that it will find a happy audience. For those who know the Forster, though—or who, like me, finally get around to sitting down with the Forster because of Lindner’s book—it’ll be a less-than-inspiring experience. Because, in its own way, Forster’s book is also a coming-of-age love story, but it’s about more than that. It’s also about kindness, about being decent to one another. About treating others as human beings, not as playthings or as objects to manipulate for one’s own amusement; about interacting with the world with love and joy, rather than cynicism and irony. It’s a reminder that we still need, over 100 years later, a fact that I find both disheartening and oddly comforting.