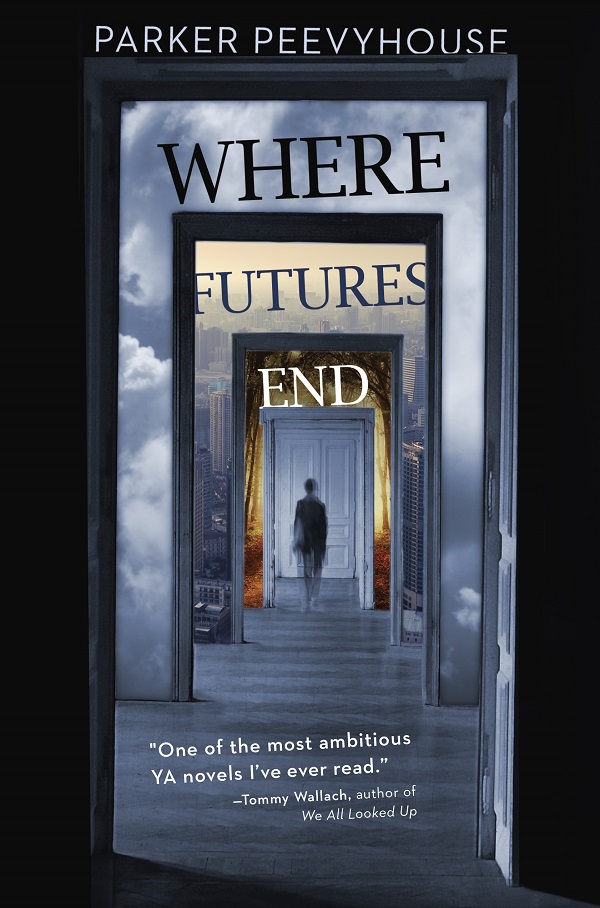 BOOK REPORT for Where Futures End by Parker Peevyhouse

Drab color scheme aside, this is a respectable attempt at conveying the different time periods in which the book is set. Extra pants for the ambiguously gendered (albeit weirdly almost ghostlike) figure, who could represent any of the main characters!

The deal is really five separate(-ish) deals set in different time periods in the future, and how these novellas are interconnected is revealed bit by bit.

In a year from now, Dylan starts seeing glimpses of another world. In 10 years' time, Brixney must increase her social media hits (and therefore, corporate sponsorship as well) to clear her family's debts. In 30 years, Epony and her boyfriend use deceit to gain newfound reality stardom. In 60 years, Reef must find a way to survive in a city where virtual reality has eclipsed actual reality. And, finally, in over a century from now, Quinn discovers how these five teens are linked together.

As compelling as each character's story is, none of them had standout, this-is-why-they-should-be-my-BFF moments for me, so I'm content with just getting to know them better. Plus, being their bestie would mean having to live in their gloomy futures, aka HARD PASS.

A few of the main characters have a love interest—or, at least, a love curiosity—with the romance being most prominent in Epony's story. However, a kissing book this ain't, so any swoon derived is just a happy bonus.

Talky Talk: Through the Looking Glass

This book is divided into five distinct sections for each of the main characters, with a singular vision from Parker Peevyhouse to unite them all. Interestingly enough, Peevyhouse wrote in first person for the female characters and third person for the male characters—although the switches don't distract from this futuristic story of contemporary relevance, which tackles topics like economic inequality, social media, and environmental stewardship.

Let's be real: who doesn't daydream about the future? Based on her fascinating speculation, it'd be a lot of fun to pick Peevyhouse's brain on which trends she thinks will stand the test of time, even if I find some ideas more plausible than others. (Unfortunately, she also thinks unconventional baby names are here to stay. THANKS, GWYNETH.)

There aren't a lot of physical descriptors for these characters, which means I get to cast them however I want!

I was intrigued when this book showed up on my doorstep, but I had no idea just how bewildering it would turn out to be. I was glad to let it call the shots while I processed everything that was going on. I'm still not quite sure what just happened—this might be one of those dates that are built for revisiting—but it was def. a unique experience.

Where Futures End will be available on February 9.