Gabi, a Girl Whose Story is for Everyone 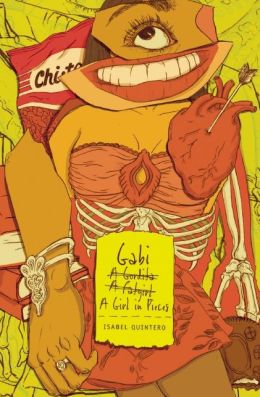 Every so often, I read a book I love so much that I feel like it could cure all of the ills of the world.

Which is only half hyperbole: I really, truly believe that Isabel Quintero’s Gabi: A Girl in Pieces isn’t just a GOOD BOOK, an ENTERTAINING BOOK, a MOVING and SMART and EMPATHETIC BOOK, but that it’s an IMPORTANT BOOK. For one reader, it will be the first time she’s seen herself reflected in fiction; for another, it will shake and rock and broaden her worldview; for yet another, it will be her inspiration to pick up her own pen and start writing.

It’s that special; it’s that capable of influence and change.

It’s the diary of Gabriela “Gabi” Hernandez: Californian high school senior, Mexican-American, aspiring poet and self-described “fat girl.” Her voice is outstanding: honest, original, believable and often hilarious—so much so that I read the majority of the book aloud to my husband, and he DIDN’T EVEN SEEM TO MIND. She’s brave, she’s thoughtful, she’s often cheerfully crass. She’s quick to laugh, self-deprecating; she’s capable and passionate. Everything about her and her journey made my heart pitter-pat with joy and contentment and affection and recognition—because while she is very definitely unique and distinctly always HERSELF, readers will see themselves and hear themselves in her story and in her voice.

Here are two—and believe me, it’s so hard to just pick two—more of the highlights:

Body image: A book about a girl with weight issues who DOESN’T have a life-threatening eating disorder or crippling depression? STOP THE PRESSES. Who gets a boyfriend who thinks she’s beautiful just as she is, period and full stop? SHUT THE FRONT DOOR. Does she have moments of feeling self-conscious, unsure, unattractive? Absolutely. She also A) has a mother who is constantly picking at her about her weight and about her love of food and B) is an American woman in 2014. OF COURSE she occasionally feels like that. But more often than not, she is happy and content with her appearance…and when she starts jogging, it’s about blowing off steam and stress and being healthy, NOT about losing weight.

Sex and sexuality: Oh, wow, where to even start? With her one best friend who finds out she’s pregnant at the beginning of the book, or with her other best friend who comes out to his parents and then gets kicked out of his childhood home? With the fact that somehow, Quintero manages to deal with both of those issues, as well as sexual assault, abortion, finding a balance between faith and religion and belief and sex, in a way that is nuanced, complex, and satisfying? That Gabi is capable of being in love with her boyfriend but also acknowledging that sometimes, she is attracted to other people, and that that doesn’t make her a bad person? That buying condoms is embarrassing and terrifying but also preferable to not having them on hand IF she chooses to have sex?

All of that, and I didn’t even touch on how rich the book is in terms of culture and within cultures: teen, American, Mexican-American, secular Catholicism, fundamentalist Christian, generational. Or about how it deals with the fallout of addiction and the mixed and confusing push-pull feelings of hope and despair, love and rage, pity and contempt that family members experience. Or about Gabi’s poetry, which is totally solid, and her eight-page zine, which should be required reading for EVERY HIGH SCHOOLER EVER. Or about how friendship means that sometimes you keep your mouth shut, because some stories aren’t yours to tell. Or that it’s possible to love your family, but you don’t have to live your life exactly the same way, that it’s okay to make different choices, to go your own way.

It’s not even December yet, but I am absolutely certain that this book will be one of the best books—if not THE best book—I read this year.