Gaming the System: The 1987 Hugo Awards 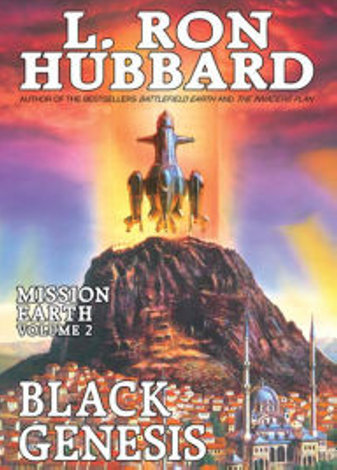 Last week, the finalists for the 2016 Hugo Awards were announced, showing a serious vulnerability in the election process, one that allows for a unified block of fans to place a select group of works on the ballot. Much ink has been spilled over what the larger ramifications are for this, but it’s useful to note that this isn’t the first time that this has happened; it happened in 1987 with L. Ron Hubbard’s novel Black Genesis.

Lafayette Ronald Hubbard was born on March 13th, 1911 in Tilden, Nebraska. His early life story is one that is controversial, with various accounts from biographers and the Church of Scientology. He spent his childhood in the American west, and later travelled with his father, an officer in the U.S. Navy, to Guam.

He briefly attended George Washington University, where he studied Civil Engineering and was a classmate of Paul Linebarger (who later wrote under the pen name Cordwainer Smith), who published his first short story, “Tah,” in the school’s newspaper, Literary Supplement of The Hatchet in 1932, shortly before he dropped out of the school.

Hubbard was drawn to writing, and began to make his living as a writer, penning scripts in Los Angeles, and began writing for pulp magazines. He made his science fiction debut when he sold his first short story, “The Dangerous Dimension,” to John W. Campbell Jr. for his July 1938 issue of Astounding Science Fiction. It was from this point that Hubbard’s career as a science fiction author took off running: in 1939, he published “The Ultimate Adventure” (Unknown, April ’39), “Danger in the Dark” (Unknown, May ’39), “General Swamp, C.I.C.” (Astounding August ‘39), “This Ship Kills!” (Astounding, November ’39), and “Vanderdecken” (Unknown, December ’39).

His first novel, Slaves of Sleep, appeared in Unknown Magazine’s July 1939 issue, while his second, Fear, appeared in the magazine’s July 1940 issue. Campbell serialized one of his best known works, Final Blackout,beginning in April 1940. The novel follows a lieutenant in England following a thirty-year war, who gains power and becomes a dictator. The Encyclopedia of Science Fiction notes that the novel “veers extremely close to the fascism its text explicitly disavows.”

Throughout the rest of the 1940s, he continued to prolifically sell stories to Campbell and his publications. Hubbard would also join the US Navy in 1941 as a Lieutenant, briefly commanding the USS YP-422 and USS PC-815, during the Second World War, but would later be removed from command and was medically discharged and placed on inactive status. He later resigned his commission in 1950.

Throughout the 1940s, Hubbard was considered a major figure within the field, part of the stable of writers that Campbell had cultivated through Astounding Science Fiction: Robert Heinlein, Isaac Asimov, L. Sprague de Camp, Lester del Rey, A.E. van Vogt, and other well-known figures. While most of these authors continued to prolifically write throughout the 1950s and 1960s, Hubbard changed course and began a new career track: Dianetics.

In the May 1950 issue of Astounding, Hubbard published a 40 page article titled “Dianetics: A New Science of the Mind,” alongside a book titled Dianetics: The Modern Science of Mental Health, which became a bestseller. “Never had a writer more spectacularly broken out of science fiction’s magazine ghetto,” noted Paul A. Carter, in The Creation of Tomorrow: Fifty Years of Magazine Science Fiction, “and seldom had science fiction so confidently put its worst foot forward.” The book described methods to clear one’s mind, which drew on Hubbard’s tendencies in fiction to focus on psi powers and the powers and abilities of the human mind. He found in Campbell and van Vogt sympathetic followers, and began a movement which attracted thousands.

Hubbard left the Dianetics movement shortly after it began, and started a religion, Scientology, which has often been described as the first science fiction religion. In the coming decades, Hubbard expanded the organization to include tens of thousands of members across the world. From the 1970s, it also published Hubbard’s works through a dedicated imprint, Bridge Publications, Inc.

Throughout the 1960s and 1970s, Hubbard had largely abandoned the science fiction field, focusing instead on the organization that he had built. In 1982, he returned to writing, penning a massive novel, Battlefield Earth: A Saga of the Year 3000, which he then followed up with another massive series, Mission Earth, comprised of 10 volumes.

Hubbard passed away on January 24th, 1986, just months after the publication of the first installment, The Invaders Plan in October. The series was met with negative reviews, and The Encyclopedia of Science Fiction noted that it was a “farcical over-egging of a seriously thin narrative thread fails to disguise a tale that would have been more at home in the dawn of the Pulp magazines, though its length would not have been tolerated.”

Following the publication of Battlefield Earth, Bridge Publications had begun to heavily promote its author. Hubbard and his publisher were pointed in the direction of a flaw in the Hugo Award voting system, particularly by Charles Platt, a science fiction author and editor. In a 1983 issue of his publication, The Patchin Review, he plastered a banner on the front page: “Vote for L. Ron Hubbard!” In his introductory editorial, he lamented that the Best Novel Hugo was “merely a measure of how personally popular a writer is among a small clique of science-fiction fans.”

He also noted that there were things that fans could do to change this: “Hubbard is no hero to the people who usually vote for Hugos. If he won, would it bring about a reformation of the Hugo system, or even its abolition? There’s only one way to find out.”

He wrote to Hubbard and the Bridge, noting that “anyone may nominate and vote. All you have to do is become a supporting member of this year’s world Science Fiction Convention. You do not have to attend the convention itself.”

Hubbard and the Bridge seem to have followed this advice, either coming to this conclusion on their own, or through Platt’s suggestion. Hubbard had established a major story contest, Writers of the Future, and had begun heavily sponsoring science fiction conventions in the mid-1980s. Writing in a fanzine, David Langford authored an essay that described the efforts of the publisher, noting that “it seemed that a large number of fans had become similarly, cumulatively bothered by the grotesque scale of the L. RON HUBBARD promotions,” during the 1987 Conspiracy Convention. The organization had begun promoting the books and sponsoring covers to get Hubbard’s name out before readers.

During the lead-up to this convention, Hubbard’s interests seemed to have helped beyond mere sponsorship of convention booklets and workshops. Fans have alleged that Hubbard’s followers worked as a block and voted in such numbers that Black Genesis, the second of the Mission Earth series, found itself a Hugo finalist for Best Novel.  Ian Watson, writing in Conspiracy Theories, noted that the presence of the book as a finalist was suspect.

“Did all those who nominated [Black Genesis] in the first place merely have supporting memberships -- suggesting that the only reason for buying the membership was to nominate BG? Furthermore, how many of the people who nominated BG only nominated BG and nothing else? If we could discover this information from Paul Kincaid [Award Administrator] then we might have an indicator of whether BG was in fact "bought" on to the ballot.”

In the same publication, Chris Evans noted that the question about the ballots had been raised with Kincaid, who had already disposed of them. However, he noted that most of the ballots that had been taken out had been from supporting memberships – convention memberships for those who wanted to take part, but who couldn’t or didn’t want to attend the convention in person.

"At least fifty per cent of the nominations for Black Genesis came from people taking out supporting membership with their nominations. A large number of these came from people in Britain whom I've never heard of in any sort of fannish context, either before or since the convention. A lot of the nominations from people in Britain came on photocopied ballots with Robert Springall's name written on the bottom. It is within the rules to photocopy ballots and circulate them, providing that the person who has done the photocopying puts his or her name on the bottom. The people who nominated Black Genesis either did not nominate anything else or nominated other Hubbard novels or books by writers connected with the Writers of the Future competition such as Gene Wolfe and Robert Silverberg. I didn't make any record of this, but my impression was that a large number of people who took out supporting memberships to nominate Hubbard's book didn't actually vote in the final ballot. Most of the supporting memberships that were taken out for the convention were taken out by people who nominated Black Genesis or other Hubbard books."

Thus, Black Genesis had arrived on the ballot with a groundswell of support from people largely outside of fandom and had been nominated alongside Orson Scott Card’s Speaker for the Dead, Bob Shaw’s The Ragged Astronauts, Count Zero by William Gibson, and Marooned in Realtime, by Vernor Vinge.

This technically isn’t outside of the rules, but the blatant gaming of the system struck many the wrong way, especially once the nominations had been released. The reaction was decisive: Black Genesis failed to even place in the awards. Fans voted for ‘No Award’ in protest of its placement.

It’s hard to say whether or not these ballots came specifically from Scientology followers, but it does seem to fit with tactics that have been adopted by the Church when it comes to books. In 1990, Robert W. Welkos and Joel Sappell, writing for the LA Times, noted that L. Ron Hubbard’s books tended to remain on bestseller lists for a long period of time, and cited reports from booksellers and from former Church employees that members of the Church would go out to bookstores and buy up every copy they could, which would increase the sales figures of each book.

Fans have alleged that the Church’s gaming of the 1987 Hugo Awards was a tactic used to further boost the profile of Hubbard and of their organization as a whole. The Hugo Awards as a whole are fairly easy to game, and this tactic once again surfaced following a pair of organized campaigns to place certain approved works on the ballot. As had happened in 1987, these works were largely rejected with ‘No Award’ issued in several categories.

The conclusion here seems to be that science fiction fandom has tended to recognize when an award—which is designed to identify the genre’s best stories and creators—is being gamed for other purposes, and will react accordingly. With the most recent ballot released with slated works dominating several categories, it’s likely that we will see history repeat itself.