Getting Comfortable in Your Own Skin 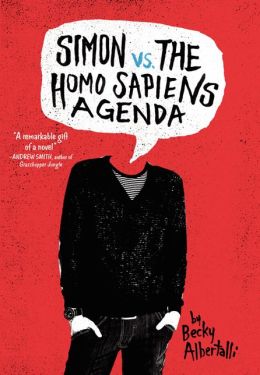 While reading the last 25 or so pages of Becky Albertalli’s Simon vs. the Homo Sapiens Agenda, I happily cried all over myself, laughed out loud, and occasionally paused to clutch the book to my chest…and I was so blissed out that I didn’t care that I happened to be manning the circulation desk or that I was arming my more smirky patrons with prime Leila-mocking fodder. The last book that inspired a reaction that publically passionate—not counting Susan Juby’s upcoming The Truth Commission, which I plan to go on about at length (and soon!), but which is an entirely different animal—was Stephanie Perkins’ Anna and the French Kiss.

The book opens with this fantastic line:

It just gets better from there. For a good while, Simon has been pseudonymously corresponding with Blue, another boy in the junior class in his Georgia high school. They’re both gay, neither is out, and each boy has become the other’s confidant and lifeline. They have morphed from cautious strangers to trusting friends to flirtatious friends to two boys who are on the verge of falling for each other without ever having seen the other’s face.

...but then Simon leaves his email logged in on a school computer, Martin Addison gets screenshots of it, and the blackmail begins.

It’s a genuinely sweet—not at all saccharine—love story, but it’s also a story with depth and weight, strong characterizations and complicated relationships. While the focus is very much on Simon and Blue, their personal navigation of the coming out process and the strengthening bond between them, all of the other characters are on their own journeys, too: some intersect Simon’s, and some progress off to the side. Simon vs. The Homo Sapiens Agenda is Simon and Blue’s story, but the other characters are so real, so honest, that I hope Albertalli will revisit Creekwood High School in order to give everyone else some time in the spotlight. They’re all in my heart now, and I don’t want to let them go. I even empathized with Martin, whose behavior is so entirely reprehensible that the other characters would be ENTIRELY justified in not forgiving him. That’s an impressively fine line for an author to walk, to show a character’s heartbreak and misery without justifying his actions.

It’s as much a story about friendship and family as it is about romantic love—as I said, Simon isn’t the only one dealing with change—and that’s a big part of what makes this book such a treasure. The sweetness I mentioned earlier isn’t due entirely to Simon and Blue. It’s also due to the strong bonds in Simon’s family, and the strong bonds between him and his friends—the love story caused plenty of happy tears, yes, but even more of them were due to the strength of Simon’s support network, and their willingness to rally ’round him even while dealing with their own strife.

Bonus: Commentary about being comfortable in your own skin, about the intersection of gender identity and sexual orientation, about assumptions and stereotypes and cliques and race and birth order and religion and how moving from adolescence into adulthood is a transition for parents, too.

Nutshell: IT’S A HUG IN A BOOK. DO NOT MISS IT.