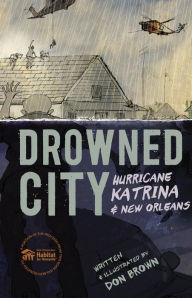 In literature, people tend to throw around the phrase “Golden Age” with abandon. I keep hearing that we’re living in a “Golden Age of Picture Books,” and I’m still thinking about that one. But I think many people would agree that it’s a Golden Age of graphic novels for children. We see on a regular basis many well-crafted new titles, one of them even winning a Newbery Honor this year and one, geared at teen readers, winning a Caldecott Honor, of all the (very historic) things.

Today, I’m shining a spotlight on a small handful of new graphic novels that caught my eye. We’ll start with the serious and end with the gloriously ridiculous. How does that sound?

It’s been 10 years since Hurricane Katrina ravaged New Orleans, and Don Brown’s new book, Drowned City: Hurricane Katrina & New Orleans, chronicles it all in great detail and with his signature artistic style. It’s nonfiction in a graphic novel format, crafted with a long list of sources well-documented at the book’s close. Stark and moving by turns, it is a superb book. Brown doesn’t sugar-coat a single thing in his account of what happened and the gross negligence from local and federal governments alike. From “swollen dead bodies…in streets and float[ing] in the water,” to the “filthy and viscous” floodwaters after days of chaos and neglect, to the putrid stench inside the Morial Convention Center and the “hundreds dead in the Superdome,” Brown never flinches from the truth. Though he captures the destruction and sorrow of this horrific event, he pays tribute to the heroes, the civilians who rallied to help those in need, while simultaneously noting those political leaders who provided little to no assistance. It’s grim, honestly capturing this nightmarish event in American history, but Brown closes on a note of hope, discussing how the city came back to life. In particular, he focuses upon a man who is a “born and raised” New Orleanian, quoted on the final page as saying, “We’re coming back. This is home. This is life.” Brown dedicates the book to “the resilient people” of New Orleans and the Gulf Coast, and a portion of the proceeds from the sale of the book will be donated to

Next up is Baba Yaga’s Assistant, the dramatic and beautifully illustrated debut from author Marika McCoola. The book’s artwork comes from Emily Carroll, whose bio notes that there is “nothing dearer to my heart than an old crone full of riddles, tricks, and countless pointy teeth.” Ah, dream project for her then. The book, awash in cool blues, purples, and reds, tells the story of Masha, a young girl grieving over the recent loss of her grandmother and many years without a mother. Masha’s father is emotionally distant and has re-married a woman with a bratty young daughter. Structured as if it’s a fairy tale, the story takes Masha to the home of Baba Yaga, the witch of Slavic folklore whose home walks on chicken legs. Baba Yaga needs an assistant and gives the girl a series of tests she must pass. Both author and illustrator strike the perfect tone—sinister yet loving at the same time—in this riveting story of one girl’s triumph over loneliness.

Fans of Ben Hatke’s stellar (in more ways than one) Zita the Spacegirl series will be happy to know that his new graphic novel, Little Robot, hits shelves in early September. The (human) protagonist of this book, a resourceful and scrappy young girl, leaps off the page. On one

of the opening spreads, readers see her wiggle her way, backside first, out of a trailer home window, land on the ground, and begin to explore. She roams free, no parents in sight, in what looks like a simple sack of a dress and a set of tools in a satchel hanging on her back. (Wrenches are her friends.) It’s in the water near a junkyard she’s exploring that she finds a robot, who has fallen off the back of a semi barreling down a road one night. Far from his factory, he’s confused and lost, but he and the girl become friends. Soon, a menacing—and much larger—yellow robot is sent to find our tiny hero and return him to the factory, but fear not. The young girl is on the case. This is a memorable story of friendship, and Hatke shows graphic novel fans once again that he can deliver the goods—strong characters, vivid settings, and stories with style to spare. I hope this one is the first of a series, because it features characters I’d love to re-visit.

e last zookeeper has turned the final lock. Last year’s Macbeth was tremendous fun—Shakespeare’s tragedy with lions and owls and lots of blood ketchup. Romeo and Juliet, on shelves in late September, is very funny; Romeo is a rooster prince and, Juliet, the daughter of the Lord of the Bears. Those who fear adaptations of Shakespeare plays for children, fear not. As the Kirkus review notes, it’s approachable and not insufferably watered-down. Expect a lot of laughs from the children who read it. Bravo!

…And a standing ovation for each of these highly recommended new graphic novel titles.