Getting It Right with Jonathan Auxier 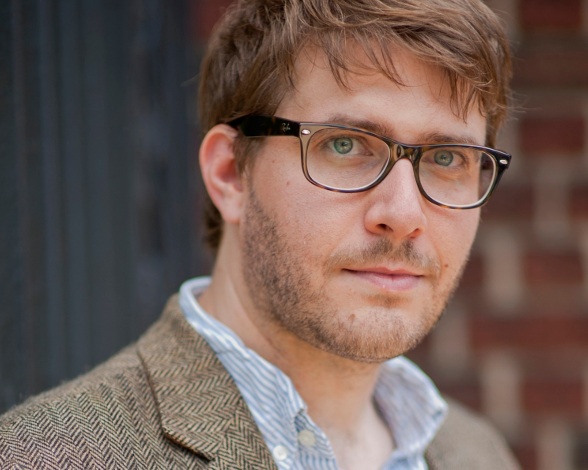 Even if you haven’t read (but especially if you have) Jonathan Auxier’s Peter Nimble and His Fantastic Eyes (2011), you’ll want to pick up a copy of Sophie Quire and the Last Storyguard, the latest novel from Auxier, during which Peter meets feisty, brave Sophie. Her world changes dramatically when she learns that she, an unassuming bookmender, is a Storyguard, as was her mother before her. When Sophie is given a copy of the magical Book of Who, she becomes a target for Inquisitor Prigg, whose plan is to rid the town of nonsense, especially storybooks, on Pyre Day. This all kicks off a grand adventure for Sophie, Peter, and a whole cast of well-crafted characters in a story celebrating the written word.

I tracked down Jonathan on the heels of finishing this exceptionally good novel to chat about Sophie, storybooks, his writing, and more.

Jules: Hi, Jonathan! As I've already told you, I read Sophie Quire aloud to my girls (ages 12 and 10). This is fitting, since two years ago we read The Night Gardener in the summer as well. We really enjoyed it, and it was the book that defined our summer of 2014. Sophie entertained us greatly, too.

This isn't the world's most insightful question, but I'm dying to know how you pronounce The Uncannyon (which to those who haven't read this book is the "Great Unknown whose depths could never be plumbed" in Sophie's world). Is it pronounced "uncanny-yon"? Or "un-canyon"?

Jonathan: If you say it quickly enough, the two pronunciations sort of blend into one.

It's funny you start our conversation with wordplay, because language is an essential component of Sophie Quire. No-Nonsense, Uncannyon, the Dead Certain, the Last Resort: Those phrases were the foundation of the whole world. That's probably why I consider books like Through the Looking-Glass and The Phantom Tollbooth as major inspirations, even if the final product bears little resemblance.

Jules: Yes, and this wordplay was one of many reasons it was an entertaining read-aloud, in particular.

Jonathan: Though reading wordplay aloud can be tricky! How many young Harry Potter fans completely missed out on the "mirror of erised" joke because they were listening to the audiobook?

Jules: For this book and Peter Nimble and His Fantastic Eyes—or I guess any of your novels—how do you begin? Are you first motivated, rather, by setting or character or perhaps something else? (That may be a ridiculous question.)

Jonathan: That's the second question you've apologized for asking – knock it off!

Jules: Knock it off I shall.

Jonathan: The only thing bad about the question is that my answer is a bit muddled – because every story has a hundred starting places. I spend a lot of time drawing in my journal, and every once in a while I doodle something that sucks me in and makes me want to know more. For Peter Nimble, it was a baby floating in a basket beside a raven who had just pecked out his eyes. For Night Gardener, it was a girl waking in the middle of the night to find dry leaves in her hair. In the case of Sophie Quire, it was a girl mending an old book whose pages start moving slightly, like they're breathing.

Jules: There's a lot I liked about Sophie, but I especially love the opening, where you wax rhapsodic about "the singular pleasure of handling a well-made book," and your closing Author's Note in which you pay tribute to the voracious reader your mother was, as well as books that impacted you as a child (such as, Matilda). The whole novel is filled with moments to warm a bibliophile's heart. It's also a treat for people who love words, and I don't just mean the wordplay you mentioned. I loved your vocabulary choices; you certainly don't write down to children. Was that as fun to write as it seems? What were the challenges, if any, of penning a sequel?

Jonathan: I'm so happy that the book seemed fun to write. I went through a lot of pain and agony to create that (totally false) impression! A fun reading experience was a major priority throughout the whole process – Sophie Quire was written to be book that I wish someone had given me when I was young. The biggest challenge ended up being exactly the thing you mentioned at the start of your question: the theme of books. I took very seriously the mission to explore the importance and function of literature (especially fiction) in a way that went beyond trite, bookish platitudes. Unfortunately, "What is the point of a storybook?" is actually a really difficult question to answer because, at the end of the day, stories are largely frivolous: They don't fill an empty belly or suture a wound or shelter the lost. And yet every reader knows that something almost mystical transpires when the right reader finds the right story. I was trying to articulate the meaning of that transaction. Ultimately, I found the easiest way to answer the question was to invert it and ask "What happens if we lose our storybooks?" And that question became the foundation of the entire novel.

Jules: Yes, the Pyre! Censorship in its most vile state.

Jonathan: It's true that Sophie Quire employs censorship imagery, but as the book went on, I became much more focused on a different threat: cultural indifference. With censorship, there's often a sense that a change of regime would lead to more freedom, but when the threat is coming from the entire population, the solution becomes much more difficult. How do you rekindle a love of stories in the hearts of those who see no value in literature? That became a central question of the book.

Jules: Was part of the pain and agony you mention the world-building? (I think your world-building is impressive.) Do you make tons of notes about that (the world of the story) before writing?

Jonathan: I quite enjoy world-building! It might be my favorite part of the whole process. I do make a lot of notes before and during writing, and the further along I get, the more I try to make those world details bend toward the main themes of the story. For me, world is just another way to get at theme.

There's a well-documented disagreement between Tolkien and Lewis on the subject of fantasy worlds. Basically, Tolkien wanted to create fully-realized environments complete with language and history and mythologies that went far beyond the borders of his small narratives. Lewis felt, in many ways, the opposite: He wanted just enough world to tell his story. His worlds were subservient to theme. When he inserts Father Christmas into the middle of Narnia, you can see that's not for the satyr's benefit; it's for his readers, whom he knows it will delight. I'm distinctly in the Lewis camp.

Jules: Funny you should mention that. I'm simultaneously reading the Narnia series aloud to my daughters.

Jules: We’re about to get to The Voyage of the Dawn Treader, which is my very favorite.

One final question: What can you say, if anything, about the next book? I'm ready to learn more about Madame Eldritch.

Jonathan: I'm currently in the middle of writing a quieter book that I might describe as Charlotte's Web with a chimney monster. I'm glad you liked Eldritch. She was incredibly fun to write – a mixture of Morgan le Fay and Milady de Winter and even Jadis (from the aforementioned Magician's Nephew). A lot of readers have asked me about what happened to her at the end of the story. I'm a pretty big fan of leaving things unsaid, and I definitely wrote Sophie Quire as a complete story – which means that the unknown parts are meant to remain unknown. Then again, I swore I'd never write a sequel to Peter Nimble, and yet here we are talking about Sophie Quire!

Jules: Thanks for chatting, Jonathan. (The phrase “Charlotte’s Web with a chimney monster” especially made my day.)

All images used by permission of Jonathan Auxier.