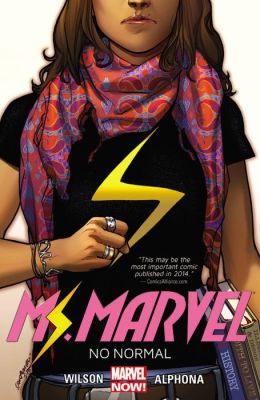 I was originally planning to write about an upcoming book today, but my feelings about it were not entirely positive, which seemed like a downer for Thanksgiving week. So, instead, I’m going to talk about books I’ve read in 2014 for which I’m thankful. This is NOT a best of list—for one thing, I’ve still got an entire month of reading ahead of me, and as a first-round Cybils panelist, that means that in December, I’ll probably read three times more books than usual; for another, not all of the books on the list came out this year—but, as I said, a list of books that I’m feeling especially thankful to have read this year.

I am thankful for G. Willow Wilson’s Ms. Marvel and Gail Simone’s Batgirl, because they brought me back into the world of comics. Before these two books caught my eye—Ms. Marvel’s Kamala Khan is a teenage Pakistani-American from New Jersey, a gamer, a fanfic writer, a Muslim, and suddenly, a superhero; Batgirl’s Barbara Gordon is dealing with Joker-related PTSD while using her eidetic memory and ballet moves to take down foes three times her size—

I hadn’t bought comics with any regularity for years. Now I’m hooked again, I’m getting caught up on old favorites (Astro City! Powers!), discovering new ones (Coffin Hill! Fatale! Hawkeye!), and I am going so broke, so fast.

I am thankful for David Almond’s Skellig, Garret Freymann-Weyr’s My Heartbeat, and Ellen Wittlinger’s Hard Love, for reminding me that it’s both important and rewarding to return to the backlist. Rediscovering and revisiting these three books—all over a decade old, all still emotionally relevant and honest and eye-opening—made me eager to start looking back, not just to reread old favorites, but to discover the treasures I’d missed. (Also, I found it especially interesting that all three of these books clocked in at about 200 pages, which is a rarity now.)

I’m thankful for Mary E. Pearson’s Kiss of Deception, for being exactly the sort of female-driven high fantasy that I’d been missing since Rae Carson’s Girl of Fire and Thorns trilogy ended last year.

I’m thankful for Hollis Gillespie’s Unaccompanied Minor, for giving me a behind-the-scenes look at airports and air travel, as well as highlighting all of the fun of MacGuyer while being far more entertaining than watching actual episodes of MacGuyer. (After finishing the book, I watched a few re-runs. Trust me, the years have not been kind.)

I’m thankful for Stephanie Kate Strohm’s Pilgrims Don’t Wear Pink, for the re

minder that not only is it possible to both be smart AND like pink, but that it’s also possible to be strong, capable, literate, and witty AND be interested in romance. Double points for reinvigorating my interest in the history of domestic work, fashion, and the culinary arts, as well as portraying it all as important, and something WORTHY of study.

I’m thankful for Sharon Biggs Waller’s A Mad, Wicked Folly, for telling a story about an ideological love triangle, rather than a romantic one—a story about a girl faced with a choice between the needs of her body and the needs of her soul; between social acceptance and her desire to create art. And while the world has been an often-frustrating place for this particular woman in 2014, A Mad, Wicked Folly was a fantastic reminder to give thanks to the women who came before—the women who fought to speak for themselves, who fought to be heard, who won us the right to raise our own voices.

YOUR TURN. Tell me what books you’re thankful for this year.