Goin' to the Dogs 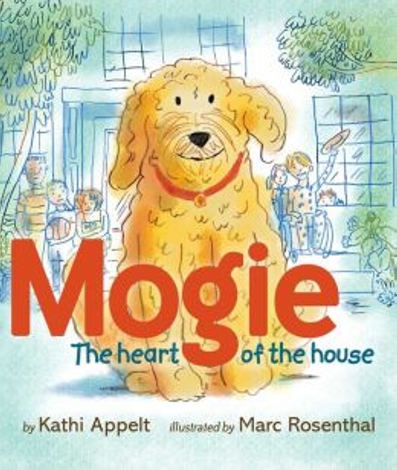 There seems to be a handful of new picture books about dogs, so this week I decided to do a round-up of some furry favorites from this summer. There’s a little bit of something for dog-lovers of all stripes here.

First up is Kathi Appelt’s loving tribute to a real-life dog. In Mogie: The Heart of the House, she writes about a Labradoodle she once met at a Ronald McDonald House, a dog who instinctively seems to know when children are sick or family members are grieving—and gives comfort when needed.

“Right smack in the heart of the Big City is a very special house,” the book opens, and it is host to sick children and their families. Staying there is Gage, who was once a “ball-throwing, race-running, back-flipping boy” but is now sick and missing his “mojo.” Meanwhile, across town, a pack of puppies is being trained to work with humans. Mogie, who possesses some of his own high-strung, marvelous mojo, is sent to the Ronald McDonald House (though it’s never named as such in the story). He heads straight for Gage, his exuberant personality reminding the boy of the joy for life he once had. Once Gage’s health improves at the book’s close, Mogie heads straight for Antonia, who has “lost her cha-cha.”

The illustrations, rendered primarily in pencil and charcoal, are from the talented Marc Rosenthal. With his relaxed lines and sunny colors, he invites readers into this world of healing, a story never once cloying. It’s a sincere and touching tribute to one special dog, as well as the good work of the Ronald McDonald House, which receives a share of the proceeds from the sale of this book. (Be sure to check out the book’s back cover for a photo of the real Mogie, who lives at Ronald McDonald House Houston.)

Gage isn’t the only ill one, though. In Carter Goodrich’s Mister Bud Wears

the Cone, we once again meet up with the Zorro of Goodrich’s previous two books, Say Hello to Zorro! (2011) and Zorro Gets an Outfit (2012). Zorro, if you’re not familiar with these very funny books, is a rambunctious pug. In this third tale, the focus is on Mister Bud, the dog with whom Zorro shares his home. Mister Bud has some sort of unidentified infection on his skin, and as a result is given the cone of shame. Zorro delights in this (that is, after he gets over the resentment of Mister Bud getting all kinds of attention and sympathy). To his credit, Zorro does try to help Mister Bud remove the pesky cone, but later he takes advantage of the situation in all kinds of obnoxious ways. Zorro is certain Mister Bud will be punished for a mishap when their owner returns, but instead, she responds with compassion, baffling Zorro. All is well in the end, and needless to say, there are a lot of parallels here with children, particularly siblings who must manage resentment and envy when someone else in the family gets extra attention when sick. Goodrich’s coming timing is spot-on, and his watercolor canines brim with personality.

I may be reading too much into it, but I think that Kelly DiPucchio’s wonderful Gaston, illustrated by Christian Robinson, also works on more than one level: On the surface it’s about

dogs, but it also brings to my mind the types of issues with which families (human ones, that is) often struggle.

There’s been a terrible mistake: Gaston, who is very clearly a bulldog, is raised in a family of poodles. Gaston’s a bit spunkier than his refined siblings, but he learns his proper manners and manages to get by. When, one day, the poodles and Mrs. Poodle meet up with a family of bulldogs-plus-one-poodle, they engage in a swap—one poodle for one bulldog. Gaston tries to grow accustomed to the loud bulldog family, and Antoinette, the loud poodle previously with the bulldog clan, tries to learn the dainty customs of the poodle gang. But neither successfully adjusts. In the end, each returns to his/her real family. And years later, Gaston and Antoinette pair up, have their own puppies, and teach them “to be whatever they wanted to be.”

DiPucchio says more here about tolerance and acceptance (no matter the creature in question) in this tale of dog-swapping than most lengthy books about actual humans manage to do. And Robinson’s spare and uncluttered acrylics are always refreshing to see.

And if you missed Chris Gall’s Dog vs. Cat back in May, head to your nearest bookstore or library shelf to find out what happens when Dog and Cat are forced to share a room. As the Kirkus review alludes to, it’s a wonder to see how much expression Gall can pull off with merely a character’s eyebrows, and there’s a lot of dry humor here as the two pets work out a way to get along. The fun endpapers alone are worth the price of admission.

Whether you're a dog person, or even a no-pets-at-all person, these are all entertaining books worth your time—and great for sharing with children during these dog days of summer.