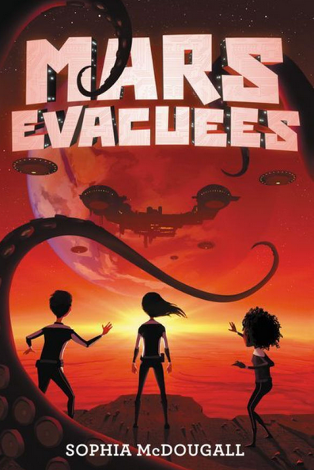 A few days later, and I’m still looking for an escape from the tail-end of winter. This time, I’m headed all the way through the clouds and out of our atmosphere: TO OUTER SPACE.

The following are some of the space-related books coming out this year that I’ve got my eye on:

While the world this series is set in has distinctly Divergent overtones—the Zodiac solar system is populated by people broken down into twelve houses, and members of each house tend to exhibit traits associated with each star sign—the Kirkus review promises that this is NOT a dystopian. As I am entirely dystopian-ed out, that alone has me curious, but even if that hadn’t been a factor, all the reviews I’ve read give it the nod for dealing well with identity, class, politics, science and faith. I’m in.

A universe where various solar systems are connected by… train tracks? Which makes it sound like Mortal Engines in Space, and I’m okay with that, because Mortal Engines was a whole lot of fun. Our hero is a young thief in a world where corporate families rule; ancient treasure and sentient trains figure in. ANCIENT TREASURE? SENTIENT TRAINS? You have my attention, Philip Reeve. (Starred review from Kirkus.)

The Cage and The Hunt, by Megan Shepherd

I loved Shepherd’s Madman’s Daughter, so this new series has been on my radar since before the first one even came out. Heroine Cora and a group of other teenagers find themselves in a zoo for aliens—where they’re told that human beings are an endangered species, so they’ve been captured and caged “for their own good.” Judging by the title of the second book, I’m going to go out on a limb and guess that living in captivity isn’t for Cora.

I’ve been a sucker for stories set on the moon since Meredith Ann Pierce’s Darkangel trilogy, so despite the dystopian elements, this is an obvious pick for me. Kirkus has not reviewed them particularly positively, but I keep hoping that we’ll disagree. Because a girl who joins the military! On the moon!

All I had to read was this tiny excerpt—You can’t cry in space. But I was giving it a good go. After all, I’d just been THROWN OUT OF AN AIRLOCK by a horde of ALIENS and had about three minutes left to live. So you can’t blame me for trying.—and I immediately ordered the first book in the series, because I don’t see a lot of space stories narrated in funny, chatty voices. Kirkus notes that the pacing is odd in both of them, but odd doesn’t necessarily mean WEAK.

On the Edge of Gone, by Corinne Duyvis

A comet is headed toward Earth. The rich and powerful have options; everyone else has to fend for themselves in a rapidly collapsing world. Sixteen-year-old Denise is desperate to score spots on a ship headed for a new world, but the people in charge are only interested in taking on passengers who are “useful,” and she’s worried that her mother’s drug addiction and/or her own autism will preclude the possibility of escape. This one has received glowing praise EVERYWHERE, including a starred review from Kirkus.

This one isn’t out until July, and as far as I can tell, it’s not set in space. But! It’s about a cheerleader-turned-alien-hunter. That’s all I need to know: YES, PLEASE.

As always, more recommendations are welcome!