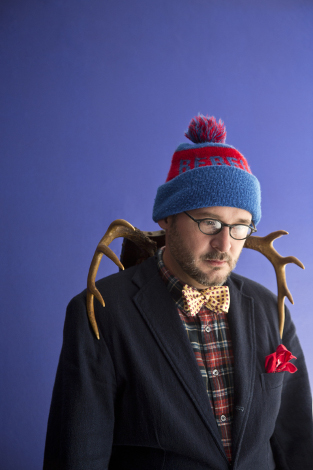 A funny thing happened to Harrison Scott Key when a publicist sent out press kits for his debut memoir, The World’s Largest Man: he wound up on Southern Living’s “50 Best-Dressed Southerners 2015.”

In one photo, Key mimes reading aloud to a mounted wildebeest head. He wears a square-patterned bow tie, plaid shirt, blue blazer with a red banana for a pocket square, and mustard-colored jeans.

“My wife hates the way I dress and so basically her disgust is sort of like—that’s how I know I’m dressing really nice, really cool, the more angry she gets,” Key says. “If you dress like that, about 20 percent of the people you meet will be like, ‘That looks great!’ But then the other 80 percent are really angry.”

As readers of The World’s Largest Man will discover, Key is practiced at defying expectations. Born a “great big gourd-head baby” in Memphis, Tennessee, he seemed destined to resemble his father in constitution as well as cranium: Pop was 100-percent all-American Southern male—hunter, intimidator, athlete, coach, provider, fighter—“the world’s largest man,” to his son.

But when his father moved the family to Mississippi, equipped young Harrison with a gun, started bundling him up each hunting season—until he resembled “the world’s largest camouflage throw pillow”—and sending him into the woods, well ... it became clear the boy would rather knead dough than shoot a deer.

When Key finally shot one, after many miserable years, it was his last.

“It was that day, I think, when I finally stopped trying to be like my father and my brother and be a different kind of man, the kind who was more like a woman, which is to say my mother. Yes, the kind of man who only climbed trees if being chased by a lion,” he writes.

Instead of a professional athlete or fearsome hunter, Key became a professor of English at Savannah College of Art and Design, a husband, a father of three girls, and a man who mixes patterns with insouciance. He’s written speeches, essays and a humor column for the Oxford American that often touched on his fish-out-of-water upbringing.

A few previously published stories were adapted into chapters for The World’s Largest Man. Among them is “The Wishbone,” a personal favorite, about the time 14-year-old Key scored 63 points as a ringer for his father’s undermanned peewee football team.

“Pop put his hand on my shoulder, and we beheld the spectacle of the battlefield together, where an alternate history played itself out, unraveling backward like reverse game tape, a glorious past where I had not quit, where I had inherited the best qualities of this beast on the grass that was my father,” he writes.

But much is shared in print for the first time. The final chapter, “The World’s Largest Man,” eulogizes his father, who died in May 2014, while Key was finishing the book.

“Writing was sort of a good distraction, because I was grieving at the time, and all these stories are expressions of grief in many ways,” he says. “The humor comes from a place of sadness—not just sadness, but a sort of disconnect between a father and a son, the disconnect between any two people who are trying to love each other. You laugh because you cry. It’s all right there at the same time.”

Mostly sidesplitting, slightly heartbreaking, The World’s Largest Man is a rollicking reckoning of the often fraught relationship between father and son. Also, there are dragons.

“Please make sure to tell your readers that [The World’s Largest Man] has everything that the Game of Thrones books have, including midget sex. Not that midget sex is in it, but they’ll have forgotten that by the time they read the book,” Key says. “It’s got violence, it takes place in a strange land that most people are afraid to go to, or don’t even know how to get there, there are midgets in it, there is a lot of blood and animal death. It’s very George R. R., R.-R.-R. Martin.

“I would say this is the book that George R. R. Martin would have written, had he not had so much talent and been so hideous looking,” he says.