Heading Back to Summer Camp 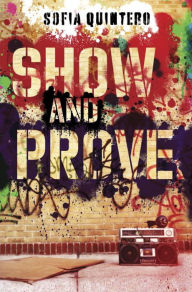 Two years ago, I rounded up a few books set at summer camp. And now, in celebration of the release of Wet Hot American Summer: First Day of Camp, I’m revisiting that topic—because camp stories are always fun, and there are tons of new ones!

Proof of Forever, by Lexa Hillyer

The summer before they’re due to start college, a quartet of girls attend a camp reunion, enter a photo booth...and get catapulted back in time two years. Lessons are learned, changes are made, fun is had, and while there’s some question of whether or not the girls will be able to find their way back to the future—See what I did there? Eh? Eh?—it looks to be a pretty light, easy-going, summery read.

Show and Prove, by Sofia Quintero

Most summer camp books I’ve encountered are set in the middle of nowhere—maybe because when we hear the words “summer camp,” we automatically imagine mosquito-ridden cabins in the dark, dark woods?—but this one is set in the South Bronx. I’ve been wanting to read it ever since I discovered it last month, and joy of joys, I just discovered that it’s finally available to request at my library. HOLD PLACED.

Tell Me Again How a Crush Should Feel, by Sara Farizan

Neither of these is actually set at summer camp, but both have romances that stem from there: in Extraordinary Means, boy meets girl at a tuberculosis sanitorium, except they actually already knew each other from summer camp; in Tell Me Again How a Crush Should Feel, protagonist Leila realizes she is a lesbian at summer camp, but the majority of the story plays out during the school year. If you’re looking for dying-kids-in-love, pick up the Schneider; if you’re looking for theater antics and lots of stuff about family and friendship and romance and sexuality, try the Farizan.

I Have a Bad Feeling About This, by Jeff Strand

A geeky boy is sent to a survival camp by his father in order to “man up”; said camp is subsequently taken over by gangsters, and the campers have to use their nonexistent survival skills to save the day. This sounds a bit like White Water Summer, but with less suspense and more comedy.

The Alex Crow, by Andrew Smith

One of the three storylines in this one is set at Camp Merrie-Seymour for Boys, a camp devoted to ending tech addiction by helping “boys rediscover the fun of boyhood.” Starred reviews from pretty much everywhere, but I still haven’t gotten to it—I think it may have fallen victim to BUZZ OVERLOAD. (In other words, I’ll wait a few years to read it so that I can go in fresh.)

Superwealthy daughter of a music industry producer runs up on

e credit card too many and gets packed off to summer camp as punishment. I, personally, am at the point where I have absolutely no interest in the Privileged Kid Learns a Lesson storyline, but Calonita is reliably smart and funny and thoughtful and readable—if I WAS in the market for a book along these lines, this would be the one I’d pick.

Summer camp for gifted teens in Kentucky; romance and literature and friendship and yes, breakfast. It sounds warm and drowsy and comfortable and quietly quirky, and I might have to read it TODAY.

And of course, no list of summer camp books would be complete without mentioning Noelle Stevenson and Grace Ellis’ Lumberjanes, which is an utter delight and an absolute joy and every good thing you can imagine in a comic book, complete with glasses-stealing velociraptors and an axe-wielding camp owner and a co-heroine named after Ellen Ripley and an adorable romance and a raccoon named Bubbles and FRIENDSHIP TO THE MAX.

Did I miss any of your recent favorites?