A Heart-to-Heart with Daniel Bernstrom 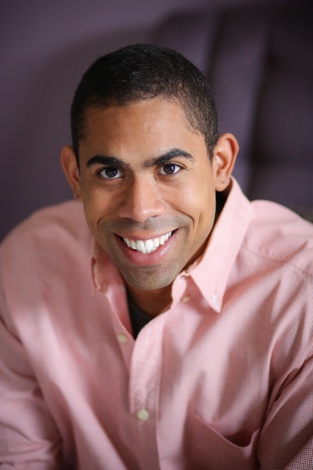 If you’re a school or public librarian on the look-out for those picture books that equate to story-time gold, you can confidently add Daniel Bernstrom’s One Day in the Eucalyptus, Eucalyptus Tree, illustrated by Brendan Wenzel, to your collection. Released in May to a starred Kirkus review (“marvelous fun”), it’s a rhythmic original cumulative folktale, featuring a clever boy, one hungry snake, some delicious onomatopoeia, and one gloriously loud belch. As more than one reviewer has noted, there’s also an entertaining Kipling-esque vibe to the whole affair.

That an author who is visually-impaired—“I can see,” Bernstrom tells me, “but it's like living in a Monet painting where everything is smears of color or a Saturday-morning, animated cartoon that lacks all detail”—created a story that is so much music to one’s ears is not surprising. What is surprising to Bernstrom, however, is the positive response the book has received. It’s also humbling, he says. “I often think people must be reading a different book by a truly talented author,” he jokes.

I asked him via email about the origins of the story and much more.

Your bio says this story came to you "late one night while working as a janitor at a preschool." What, in particular, inspired it? Was it really stuffed animals in a preschool room?

Graduate school taught me that story is mined from the heart of the storyteller. The heart is everything that makes us who we are – our passions, interests, influences, hopes, dreams, fears, past, sins, secrets, and successes. It would be easy to say that One Day in the Eucalyptus, Eucalyptus Tree is about stuffed animals or a tree or a brown-skinned boy. Are these pieces—the tree, animals, boy, and rhythm—mere bits of useless lead? Not to the storyteller. The story-alchemist tries by some strange miracle of magic and mind to take those bits and pieces of his heart and work them, form them, twist and blend them into a story, to transform bits of lead into priceless gold.

So where did my bits of lead come from? Before I wrote the book, I had just gotten back from a trip to Northern California, home of the prolific eucalyptus tree. Hearing the word, I thought “eucalyptus” funny, especially when I said it twice. The story and the rhythm did come to me late one night while working as a janitor at a preschool. And as I thought of things to add to the eucalyptus tree, there was a random assortment of stuffed animals from which to choose. As I edited the book, I returned to the preschool day after day for work, thinking of “better” animals or “different” animals to reside in my funny-sounding tree. My biggest obstacle was the largest item the snake would eat. But what if I told you that one of the groups at the preschool was named The Bees? The last major piece fell into place.

This is a book that makes for a rhythmic and entertaining read-aloud, which visually-impaired children will especially appreciate. Was that important to you as you wrote the story?

I wrote a story I would appreciate. … I grew up not being able to see as well as my peers. During story time, I could not see the pictures turning at the front of the class. In elementary school, I could not read what the teacher was writing on the chalkboard. In high school, I had the nickname “blind boy.” Sound became very important to me – to my heart.

Additionally, I sang in the school choir and played in the school band. And when I left for college, I enrolled as a music major on scholarship for one year. I learned how to write music. I learned how using open and closed dots on a lined page allowed a musician to play a certain way. I could make music by writing dots and symbols. And I wondered, could the same be done with language? Could words and punctuation instruct people to pause, breathe, and sing? Could multi-syllable words, like “eucalyptus,” twist the tongue into song?

I wanted language to move and breathe on the page – to live. And maybe, as a visually-impaired child and adult, I learned how beautiful sound can be. I saw what I could do with words and punctuation. I so desperately wanted to share how words could live and breathe and sing for others, sighted and sightless alike, just as they did for me.

What was it like to take in Brendan Wenzel’s illustrations for the first time and what do you feel he added to the story?

Brendan is an amazing illustrator. When I write, I give zero help to the illustrator. I want him to go on his own creative journey and not let me dictate what to do. Brendan was asked to illustrate a story where eighty percent of it took place in the dark. There is no light in the belly of a snake. I didn't know how he was going to do it. When I saw the art, I thought, this is exactly what I had imagined, a blur of shapes and colors washing the page in a dream-like clarity. I could not have asked for a better illustrator.

Did any particular authors or illustrators inspire you on your way to publication, as you studied for your MFA? Who are some of your favorites?

There were many books in my childhood that influenced my heart. Yes, Chicka Chicka Boom Boom, Where the Wild Things Are, Lyle Lyle Crocodile, Madeline, Make Way for the Ducklings, Curious George, Dr. Seuss, Mike Mulligan and His Steam Shovel. I have always loved the works of Jon Scieszka, Jerry Pinkney, and Jacqueline Woodson, but it was the writers I had the opportunity to work with that changed my life. Jane Resh Thomas, a mentor to Kate DiCamillo, taught me how to write stories from my heart. Writer Emily Jenkins taught me how to stand behind my work and never give up. Jacqueline Briggs Martin and Susan Marie Swanson introduced me to the basics of picture-book writing. But it was the ever-nurturing Phyllis Root (author of Rattletrap Car) who influenced me the most.

Phyllis took the foundation Jacqueline Briggs Martin had laid and opened my world to what picture books really are. She allowed me to read her unpublished book on picture-book writing, a book that solidified my education. In her book I learned I could write whatever I wanted, as long as it connected to the reader. Working with her instilled in me the Golden Rule to picture-book writing: that a picture book is a gift from the heart of the writer to the heart of the child.

Can you talk about your next books, the ones that HarperCollins acquired last year?

One is called Gator Gator Gator, and the other shall remain a great and mysterious secret! Gator Gator Gator has the same rhythmic fun [as One Day in the Eucalyptus, Eucalyptus Tree], but it is a new story with a new adventure. It is me sharing a different piece of my heart.