Here There Be Thorns 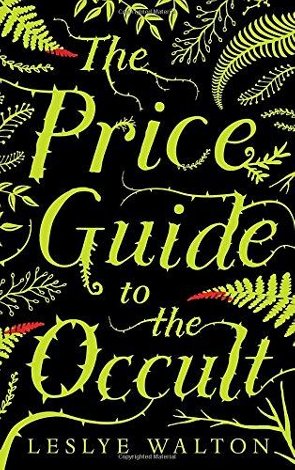 Cover Story: Here There Be Thorns

Cover Story: Here There Be Thorns

This cover is striking—I love the green lettering and foliage on black—and once you read the book, you’ll realize that it’s a very deliberate choice. Not for nothing, the hardcover also has the most gorgeous red-tipped pages, which echo the splash of red on the cover. Well done, designers!

Nor is the ninth in a line of Blackburn women—witchy women who have lived on Anathema Island since Rona Blackburn came over a century ago. The men of the island tried to drive her away, but she cursed them; in turn, she also cursed herself and her descendants. Now all of the Blackburn daughters have their own powers—or Burdens, as they refer to them—including Nor. There’s also the unpleasant side effect of their cursed love lives, too.

Maybe Nor can avoid the worst effects of the curse, though. Her Burden is fairly innocuous (she can hear the thoughts of plants and animals), and there really isn’t anyone she’s interested in on this tiny island. (You know what’s coming, right?) Maybe she’ll have a peaceful and unremarkable life.

She didn’t count on her cruel, power-hungry mother ever returning to the island.

The Price Guide to the Occult is an intensely atmospheric book, much like its predecessor, The Strange and Beautiful Sorrows of Ava Lavender. Leslye Walton weaves a tale of horror and humanity, touched with magic.

Oh, Nor, LET ME LOVE YOU. This poor, prickly girl—her mother neglected her as a child, only noticing her when Nor could be useful. Even though she’s now surrounded by people who love her, including her grandmother, her grandmother’s partner, her best friend Savvy (Savannah), and kind townspeople, she’s really an island unto herself. I just want to give her a hug (although she’d probably hate that) and help her through her mom-inflicted misery.

The romance in this book, such as it is, takes a back seat to the relationships between women in this book. Neither of Nor’s love interests did it for me, but that’s a small price to pay for such haunting writing.

Walton’s writing is so. Freaking. Gorgeous. Every scene is filled with beautiful and eerie descriptions of an otherworldly island, where the cold Pacific water and the heavily forested land hide teeth and claws and thorns. Her characters, too, have their own sharp edges and sharp tongues—even the ones who initially appear cheerful and sweet.

Walton’s prose kept me reading even when the plot left me a bit cold (the ending didn’t quite work for me). She makes Anathema Island and its inhabitants real, for better or worse: Nor’s mother is a truly terrifying woman. When you remove the magic, her abuse of Nor is straight out of the narcissist’s handbook, and I find nothing scarier than a person who lacks basic empathy. Come for the atmosphere, but stay for the exploration of familial and friend ties, and the descriptions of inner pain manifested physically.

I love the PNW, and Walton captures its cold, striking beauty so well.

You’ve seen the articles about how millennials are turning to witchcraft, astrology, and other new age/occult/spiritual practices, right? As more and more people are trying to smash the patriarchy, journalists speculate that there’s something comforting in the idea of connecting to nature (mother nature, natch), predicting the future, and honoring the feminine. Walton captures that sense of the way women with purportedly supernatural powers have been revered and feared over the years.

I mentioned it in the Swoonworthy Scale, but there’s a bit of a love triangle here, and it didn’t do it for me. Don’t get me wrong—I love a good love triangle (or square, or hell, let’s get these protagonists a harem of devoted suitors) when done well. Neither love interest did it for me, and it almost seemed like an afterthought, but I did like the way it was resolved.

Book, I was so excited for our date, and you definitely took me to a dreamy, ethereal, dangerous place where I felt anything was possible—including evil triumphing over good. It was exciting and frightening, but now that it’s over, I think I’ll stay safely in the comfort of my own home, letting your eerie words and atmosphere inspire my daydreams.

The Price Guide to the Occult is available now.

Jennie Kendrick lives in San Francisco and has an excessive fondness of historical fiction, spreadsheets, turquoise sparkly things, and bourbon. She is also a literary agent with Lupine Grove Creative. When she’s not reading, writing, or writing about reading, she cooks obsessively, goes to loud rock concerts, and thrifts for vintage everything.