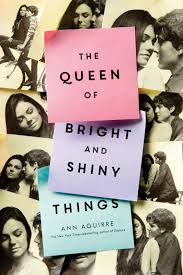 Talky Talk: The Queen of Dark and Stormy Secrets

The cover is a nice callback to the main character’s penchant for leaving Post-its with positive messages on them for people who are having bad days at school. The backdrop of photo booth photos sends the unmistakable message that this is a kissing book, so while it’s not the best cover I’ve seen, it tells you all you need to know before you even read the back blurb.

Sage Czinski does her best to be the most perfect, positive, kindest person she can. Her nickname, the Queen of Bright and Shiny Things, comes from her habit of leaving people notes on their lockers when they’re having a bad day. She helps out at home with her Aunt Gabby and tries to do the best she can in school so that Aunt Gabby will continue to let her live there.

Enter Shane, a sexy musician with a mysterious past. What’s his deal? Why is he so private? And can Sage get through to him, too?

Sage, while well-meaning, takes things to extremes—from refusing to ride in cars (she’s an environmentalist) to the point where she’ll bike a zillion miles to stick to her guns, to ignoring all of Shane’s protests that he’s fine and to leave him alone. Plus, her whole Shadow Sage deal, where she can’t ever get angry because something bad might happen, borders on ridiculous. By the end of the book, she learns to bend a bit, but I don’t think we could be friends until she realizes the world isn’t so black and white.

I did love her kindness toward others, though.

It’s no spoiler (just look at the cover) to tell you that Sage and Shane fall for each other. Some of their scenes together were downright swoony, and some of them were the stuff of soap operas.

Talky Talk: The Queen of Dark and Stormy Secrets

Aguirre’s writing can be engaging, but the soap-operatic tone and uneven pacing place it firmly in the “for younger readers” camp. You’ll have no trouble breezing through this one in a few hours.

Shane is definitely cut from the MLD cloth: tall, dark, and handsome with musical talent that blows everyone away and a mysterious past. He’s what Supernatural recapper Amanda K. once referred to as “the typical YA romantic hero, a tall emerald-eyed moppet with strong arms”—totally unrealistic, but a great portrayal of what teen girls are drawn to. Let me fix you! Let me love you!

Throughout the book, we’re told that Sage has a Dark Secret that can’t come out. When it finally does, due to a bullying classmate, it’s anti-climactic and resolved far too quickly. The buildup far outweighed the reveal.

Hey, let’s pull a Divergent/TFiOS and cast the former fictional brother as the love interest here.

Book, you looked fun, and for a lot of our date you were. But you were so similar to other dates I’ve had, you just didn’t quite do it for me. I left feeling like you just cherry-picked a few tidbits from Dating 101, and they didn’t really go together.

The Queen of Bright and Shiny Things is available now.

Jennie lives in San Francisco. When she's not reading or talking about reading, she cooks obsessively, runs a small jewelry business, thrifts for vintage everything, and practices law.