Here's to Teens Who Work 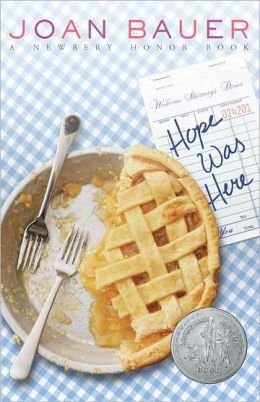 Happy Labor Day! In honor of the holiday, let’s look at some YA books about teenagers who work. And I’m not talking about vampire hunting or sneaky spying or private detecting—I’m talking about jobs that your average high schooler might have, from waitress to cashier to camp counselor.

Joan Bauer’s Hope Was Here, Rules of the Road, and Best Foot Forward

I mentioned Bauer’s Squashed in a previous themed list, but no list about teenagers with jobs would be complete without these three titles. Her heroines—a waitress and a shoe salesgirl—aren’t just excellent at what they do, they LOVE what they do. And while the specifics of their jobs are different, their passion comes from the same place: In both cases, they see their jobs as IMPORTANT, a way of providing warmth and comfort to people who are in need of it. It’s a really positive, joyful outlook, and such a welcome change from the more common attitude seen in depictions of minimum-wage jobs: ironic contempt.

Tallulah Falls and Providence are both about girls who leave home, end up in small towns, get jobs, and eventually create new lives and families for themselves. As in Bauer’s books, the girls have a passion for what they do—Tallulah’s develops a bit more slowly than Becky’s—but the books deal with much darker issues. Also of note is Christine Fletcher’s Ten Cents a Dance, which is about a young taxi dancer in WWII-era Chicago. That one is also quite gritty, and has an especially fabulous atmosphere!

As this one is largely set in and around a restaurant that is a thinly veiled version of Bennigan’s (Johnson has jokingly called it her “manifesto against chain restaurants”), it could certainly be accused of being attitudinally contemptuous. I give it a pass, though, because it’s contemptuous about the restaurant itself, not the job. It deals (among many, many other things) with the myriad difficulties of workplace romances, and while it’s a bit heavier than her other books, it still has plenty of that Might-As-Well-Be-Patented Maureen Johnson Humor.

This one isn’t so much about Cherry’s job at the Burrito Barn, but since everything starts there (Cherry saves a movie star from choking to death on a burrito, life changes BIG TIME), I’ll allow it. Also, it’s a GREAT book.

Starbird Murphy and the World Outside, by Karen Finneyfrock

I LOVED The Sweet Revenge of Celia Door, so I’m DYING to read this one. It’s about a girl who has grown up at the Free Family Farm (AKA a cult commune) leaving to work as a waitress in Seattle at the Free Family Cafe. I can’t believe I haven’t read it yet, and am feeling almost physical pain because I don’t have a copy on hand.

Elizabeth Scott’s Something, Maybe and Perfect You

Two ADORABLE romantic comedies: one set in a call center, the other in a vitamin kiosk at the mall.

My Faire Lady, by Laura Wettersten

Two summer jobs: One as a camp counselor at a living history museum, one at a Renaissance Faire. The Strohm is superfun, often hilarious, and stars a heroine who is a fashionista AND a historian. I haven’t read My Faire Lady yet, but as it’s about a girl who gets a job as a Ren Faire face painter, I am THERE.

That’s just a few, I know there are lots of others! Did I miss your favorite?